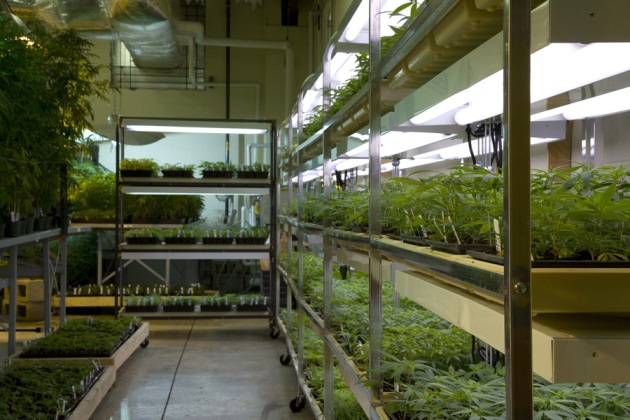 Marijuana for use in US research is grown at only one federally approved facility, at the University of Mississippi in Oxford.

Hidden in a locked room on New York University’s campus in lower Manhattan, a half-tonne steel safe guards hundreds of vials of a drug extracted from marijuana. To the US government, the drug — Epidiolex — is one of the world’s most dangerous substances, ripe for abuse. But to Orrin Devinsky, a neurologist at the university, it is a potential treatment for tremors in children with severe epilepsy.

Although Epidiolex, made by GW Pharmaceuticals in Salisbury, UK, is not psycho­active, it took Devinsky six frustrating months to secure local and national approval for a clinical trial that began in January. “If some teenagers broke in, they’d get nothing out of it,” he says. The physical and regulatory barriers that nevertheless surround Epidiolex point to the stigma that continues to stymie research on marijuana and its derivatives, even in US states that have moved to legalize its sale and use, such as Colorado and Washington (see ‘Slow burn’).

Colorado’s legal marijuana sales began in January and are booming. The state’s legislators are weighing a proposal to provide US$7 million to study the drug’s therapeutic potential. But even if the measure is enacted, Colorado researchers might not be permitted to use locally grown plants for their studies, and would need to clear several levels of government approval before running any clinical trials. The US Drug Enforcement Agency (DEA) still classifies marijuana alongside heroin and LSD as a substance with “no currently accepted medical use and a high potential for abuse”.

“It’s a terrible, terrible paradox,” says Devinsky. “The federal government is severely limiting the research that we can do.”

Currently, the US National Institute on Drug Abuse (NIDA) runs the nation’s only federally sanctioned marijuana farm, producing a research supply through a contract with the University of Mississippi in Oxford. To obtain the strain, researchers — even those with private or local funding — must gain approval from the Department of Health and Human Services (HHS) or the National Institutes of Health, as well as the Food and Drug Administration (FDA). The DEA and local drug-enforcement officials must also approve research facilities for secure storage and handling of marijuana. The approval process can last for years. 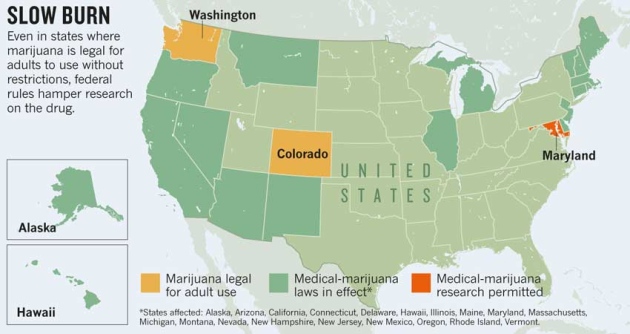 Suzanne Sisley, a clinical psychiatrist at the University of Arizona College of Medicine in Phoenix, knows this well. In 2011, she secured approval from the FDA to conduct a trial of marijuana to treat post-traumatic stress disorder in US military veterans. But it was not until two weeks ago — nearly three years later — that she received clearance from the HHS. Although Sisley already has plenty of volunteers for her 70-person trial, her laboratory will have to pass inspections by drug officials before it can receive limited quantities of the only federally approved marijuana strain.

Still, he anticipates imminent research demand for more plant varieties, especially some containing higher concentrations of CBD. Emerging data suggest that the chemical exhibits anticonvulsant, anti-inflammatory and pain-relieving effects, while lacking — or perhaps even countering — the psycho­active effects of THC1–3. A few highly publicized anecdotes involving the use of marijuana products for treating severe epilepsy in children have also stoked intense public interest in high-CBD marijuana. As reports surface of families moving to Colorado to gain access to CBD for their children, Devinsky and other researchers see an urgent need to accelerate scientific investigations of the substance.

ElSohly has already prepared one variety of marijuana that contains equal amounts of CBD and THC, and is hoping to grow a high-CBD, low-THC variety later this year. “With all the publicity going on right now, I’m sure somebody is going to request that,” he says.

But the diversity of recreational marijuana strains flooding the Colorado marketplace — such as ‘lemon skunk’, ‘golden goat’ and ‘bubba kush’ — will not help to fill the research void. In a memo earlier this month, the University of Colorado reminded its faculty members to pursue studies only through federally approved channels, although it acknowledged that the NIDA supply may not be representative of many marijuana strains available to people in the state. “As a university that receives federal financial aid and federal research funding, we have to abide by federal laws,” says Ken McConnellogue, a university spokesman.

“The federal government is severely limiting the research that we can do.”

One field that does seem likely to flourish in Colorado and Washington is public-health research. Officials in both states are preparing surveys and studies to track long-term rates of marijuana use as accessibility and social acceptance of the drug increase, and as large-scale data become available for the first time. “We have more people using marijuana, and people are more willing to tell you that they’re using it,” says Laura Borgelt, a clinical pharmacist at the University of Colorado in Aurora, who is interested in studying the effects of maternal marijuana use during pregnancy on child development.

Other topics of interest include possible changes associated with marijuana in the use of alcohol and other drugs, trends in car accidents and risky behaviour, and school performance. Last year, NIDA awarded more than $1 million in supplemental funding to five groups to study some of these questions in the context of the natural epidemiological experiments under way in Colorado and Washington.

Few data exist to predict the effects of legalizing the drug’s use and sale. Studies of the ‘non-enforcement’ cannabis system in the Netherlands by Robert MacCoun, a social psychologist at the University of California, Berkeley, suggest that marijuana consumption rose in the 1980s, as marijuana shops became widespread4. Overall, however, rates of marijuana use in the Netherlands are comparable to those in other European countries.

Cultural differences make it difficult to extrapolate those findings to the United States, warns MacCoun. His group has begun to study patterns of drug use in Washington, and he is looking forward to seeing data from Colorado researchers.“I’m watching quite eagerly to see what we can learn.”