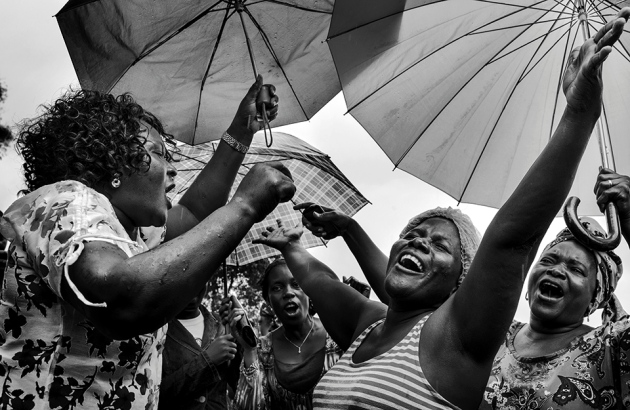 Studies of people who survived Ebola are altering scientists’ understanding of the virus.

Ebola survivors are teaching scientists some surprising lessons. Long-term studies have revealed that the virus lasts longer in survivors’ bodies than previously suspected.

The findings, presented on 12 September at an Ebola-virus conference in Antwerp, Belgium, underscore the need for extended tracking of people who have beaten Ebola and other rare infections. Researchers have long known that the virus can persist in people who have recovered from the infection. But the size of the West African outbreak, coupled with improved monitoring technologies, is changing how scientists view life after Ebola — and how to prevent future outbreaks.

“Now that you have tens of thousands of survivors and systemic approaches to follow them, you can detect things that happen more rarely and attribute them to Ebola,” says physician and epidemiologist Daniel Bausch of the World Health Organization in Geneva, Switzerland.

Researchers will soon publish the first confirmed report of a person without obvious Ebola symptoms infecting another person. A seemingly healthy mother in Guinea passed the virus to her nine-month-old daughter in breast milk, and the child died from Ebola-virus infection in August 2015, according to a European Union-funded team led by Sophie Duraffour from the Bernhard Nocht Institute for Tropical Medicine in Hamburg, Germany.

A study due to be presented at the Antwerp meeting also suggests that some people who became infected during the recent outbreak escaped detection. Miles Carroll, an epi­demiologist at Public Health England in Porton Down, and his colleagues tracked 80 people who had contact with Ebola patients in Guinea but did not themselves become noticeably ill. Yet 15–20% of these contacts developed immune responses capable of neutralizing Ebola viruses, suggesting that they had contracted mild infections that went undetected.

This ‘sub-symptomatic’ or ‘asymptomatic’ Ebola was known to exist, but the latest studies involve more people who have been studied more intensively than in the past. Researchers caution, however, that it is still rare for Ebola lingering in a person’s body to spark new outbreaks. The phenomenon would probably have escaped notice if the recent epidemic had been smaller.

Thousands of men who are infected have survived, but until recently scientists did not know that the Ebola virus could be transmitted in semen beyond three months, says Mary Choi, an epidemiologist at the US Centers for Disease Control and Prevention. The agency and the Liberian government are running the largest-ever investigation of Ebola viruses in the semen of survivors. So far, the team’s study of 466 men has detected virus fragments in semen up to 18 months after a man has recovered from his infection1.

In February, two months after the outbreak was declared over in Guinea, Duraffour and her colleagues traced a cluster of new Ebola cases to a man who transmitted the virus to a sexual partner 17 months after recovering from his infection2. Yet another study, which examined 26 male Ebola survivors, found that the vast majorityeliminated the virus from their semen within 4 months of recovery3. The precise timing varied widely from person to person, however.

Choi says that the virus probably lasts for longer than 18 months in semen. Her team will continue to monitor the virus’s persistence, while counselling survivors to use condoms or abstain from sex until their semen tests negative twice. “The primary takeaway is that semen testing should be incorporated earlier on as part of services that survivors receive,” Choi says.

Researchers must show sensitivity in communicating such findings, says virologist Stephan Günther of the Bernhard Nocht Institute, and take care not to make life more difficult than it already is for Ebola survivors, who face discrimination and lingering health problems. “We have to be careful to stress that these are very, very rare events.”