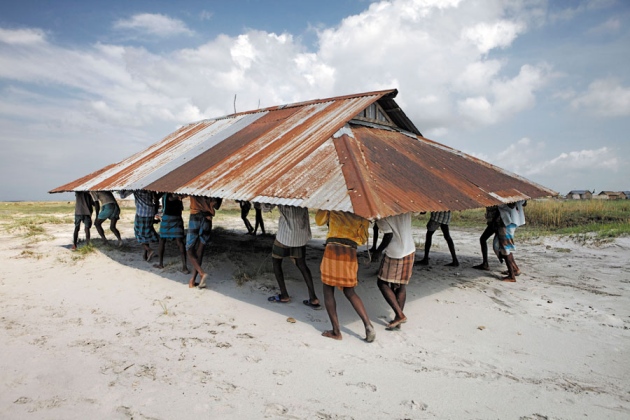 Residents in the flood-prone district of Kurigram, Bangladesh, move a community mosque to safer ground.

Current models of Earth's climate capture physical and biophysical processes. But the planet has entered a new state: humans are adapting to, as well as causing, environmental changes. This major feedback must be modelled. Projections of the future climate based on simple economic narratives1 — from cuts in greenhouse-gas emissions to unmitigated growth — are unrealistic.

Faced with droughts and rising sea levels, people alter their behaviour. Even if global climate policy is effective, and nations deliver on ambitious green-energy-production and sustainability targets, societies will be different in a warmer world. People will move to places that are richer in resources, or stay where they are and be pushed further into poverty. Population growth, urbanization, migration2 and conflict3 will compound reactions to global temperature rises.

To understand how events might unfold and what kinds of responses will be most effective, Earth-system models need to capture human–climate dynamics. It will be an enormous challenge: we are only beginning to understand how people respond to their environment. But omitting human behaviour is like designing a bridge without accounting for traffic.

There are two main scientific challenges to modelling socio-economic responses to climate change. The first is describing how humans make decisions. The second is describing the relationships between humans and the physical and biophysical components of the Earth system.

Decision theory approximates how a person or group makes a choice on the basis of their values, aspirations, health, uncertainties and rationality. Values may vary according to, for example, age, wealth, education, sex, culture and religion. One group of people might see adopting nuclear power as a practical way to avoid greenhouse-gas emissions; another would find it unpalatable. Choices, such as whether to move or stay in a location as average temperatures rise, will be influenced by events such as droughts, fires or floods. Outcomes and pay-offs might be as great as life or death.

To understand the underlying patterns, we need to collect behavioural statistics on grand scales. How do people of different backgrounds respond to extreme weather, for example? Under severe drought, do people in sub-Saharan Africa behave differently from those in southern Australia? How do the decisions made by lower- and middle-income families differ?

Some statistics can be drawn from existing databases, such as health and education data compiled by the United Nations or national censuses. Measures of social and physical mobility can be extracted from social media and Global Positioning System (GPS) information from mobile phones without raising privacy issues. A 2008 study found that the distances travelled in six months by 100,000 mobile-phone users were not random, but were well described by a simple function4.

Historical studies can inform us about possible future scenarios. For instance, Peruvian civilizations migrated between coastal valleys and the Andean highlands between AD 640 and 1200. Historical climate records and mitochondrial DNA sequences extracted from the bones of people who lived there showed that coastal droughts and flash floods pushed the populations to move to the mountains, from where they returned when droughts afflicted those lands5. Other studies have reported a higher incidence of conflict since 1950 among communities experiencing changes in climate — cases rose by a few per cent for each standard-deviation increase in temperature or rainfall3.

More surveys and longitudinal studies are needed to find out what sorts of risks individuals say they will react to most strongly, and how they actually respond. For example, a study of migration intentions in rural Pakistan from 1991 to 2012 showed that extreme heat influenced people's choices but flooding did not6. The main reason was that heat waves do not attract as much financial compensation as flood relief.

We must also find out which measurements can act as reliable indicators for a broad spectrum of behaviours. For example, income can be a strong predictor for rates of migration, conflict and reproduction, but alone, income is insufficient to predict any one of these behaviours.

And individuals do not always make rational or independent decisions. People often rely on simple rules to form judgements7. They might assume that others know better than them and thus follow social norms. Friends and relatives may hold sway, and news, online and social media are shared sources of information and influence.

“How do people of different backgrounds respond to extreme weather?”

Alternatively, individuals might act independently and rationally in the short term, yet collectively destroy a shared resource in the long term, as with climate change. People often have to make decisions with too little or too much information. Taking out insurance against flooding, for instance, might have to be done without knowing the future likelihood of extreme rainfall.

It is therefore essential to understand how the individual decisions combine across networks to produce macroscopic behaviours. A challenge for modellers will be to find which scales of social structure (governments, parties, tribes, clubs or neighbourhoods) exert most influence, as well as accounting for regional differences.

A range of modelling techniques will be necessary. One is the agent-based approach. Thousands or millions of 'agents' — digital proxies for individuals — encoded with attributes such as age or wealth interact according to simple rules. Complex group responses, such as the dynamics of infectious-disease spread, can emerge. But outcomes depend on which attributes are assigned so modellers need to ensure that the chosen variables are the key determinants of a particular response in real life. Rather than be a response to the physical effects of heat, a war in a warming region might reflect the decline in local economic conditions because of crop failure or an influx of people from a neighbouring region.

Inference methods (such as approximate Bayesian computation) could be used to discover which individual attributes contribute most to group behaviour. Methods for modelling groups of individuals with similar characteristics can still generate emergent mass responses, revealing, for example, that the contrasting dispersal of animals on land and in oceans contributes to the observed contrasts in ecosystems8.

Collaborations between natural and social scientists should be facilitated by physical and virtual centres. A hub such as the Isaac Newton Institute for Mathematical Sciences in Cambridge, UK, where mathematicians come together to solve problems that require insights from many fields, could focus efforts for developing human–climate population-modelling techniques.

Journals and funding bodies will need to smile more on such collaborations. The next (sixth) report of the Intergovernmental Panel on Climate Change should justify the importance of improved understanding and modelling of societal responses to climate change by reviewing the evidence across different working-group reports.

Scientists will need to obtain new data sets and consolidate existing ones on decision-making processes associated with environmental change. With so many factors, new approaches will be needed alongside conventional methods to collect data across a spectrum of spatial and temporal scales. This will involve data collection through social media, surveys and GPS, and will require a degree of analytical integration that will challenge computational scientists.

A parallel issue is how to store and analyse large volumes of heterogeneous data. Much data relating to individuals (such as social-network structures and movement patterns) will come with sensitive commercial or privacy issues. Careful licensing arrangements between businesses, governments and academic institutions will be needed.

Ultimately, we must establish an international data-collection effort involving the public, private and voluntary sectors. Much as we take global stock of forests or biodiversity, we should regularly assess how people are being changed by the climate that they are changing.