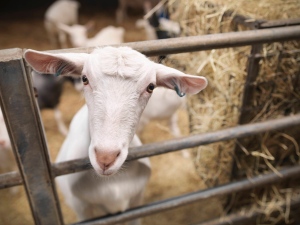 Goats are used to produce antibodies, but a California company is under investigation for raising an allegedly unreported herd.

A herd of 841 goats has kicked up a stir for one of the world’s largest antibody suppliers after US agricultural officials found the animals — including 12 in poor health — in an unreported antibody production facility owned by California-based Santa Cruz Biotechnology.

“The existence of the site was denied even when directly asked” of employees during previous inspections, according to a US Department of Agriculture (USDA) report finalised on 7 December, 2012. But evidence gathered on a 31 October inspection suggested that an additional barn roughly 14 kilometres south of the company's main animal facility had been in use for at least two and a half years, officials said.

“That’s virtually unheard of in my career,” says Cathy Liss, president of the Animal Welfare Institute, who has worked for the Washington DC advocacy group since 1982.

The discovery represents another setback for the company, which faces possible fines and suspension or revocation of its commercial licence over a pre-existing animal-welfare complaint by the USDA.

In 2012, Santa Cruz Biotechnology ranked as the second-largest supplier in the US$1.6-billion global market for research antibodies, according to an international survey by The Scientist and market-research firm Frost & Sullivan of Mountain View, California.

Neuroscientist Erik Ullian at the University of California, San Francisco, says that the industry giant develops more hard-to-find antibodies for speciality applications than its rivals. “Sometimes Santa Cruz is the only option that we have for trying an antibody.”

But for years, the company has run foul of animal regulators. The USDA, which typically inspects research and commercial animal facilities once or twice a year, inspected Santa Cruz Biotechnology operations at least nine times in 2012. A tip-off led inspectors on 31 October to the remote barn, where they found the additional goats, some of which were lame, anaemic or had protruding bones.

“Our inspectors are very thorough,” says USDA spokesman Dave Sacks, “But they’re only going to do that for the sites we’re told are there. It is a serious matter, certainly.”

“If they don’t know, or neglect to tell the inspector, about 800 animals, it begs questions about how well this company is run and how careful they are in their product line,” says Ullian.

Santa Cruz Biotechnology declined Nature’s request for an interview, but stated by e-mail that “all animals maintained at the ranch are reported annually to the USDA, including the subject 841 goats.” The company says that it intends to resolve the dispute and is working separately to settle the USDA’s previous complaint by 31 January. Without a settlement, that case would move to a special court hearing, at which a judge could decide to suspend the company’s operations.

Animal officials at the National Institutes of Health (NIH) would not comment specifically on the USDA findings or the use of Santa Cruz Biotechnology products by NIH-supported researchers. The NIH's public health services policy on animal welfare — which since 1985 has governed the use of animals and animal products by NIH-funded researchers — exempts purchases of off-the-shelf antibodies. On 11 January, the Animal Welfare Institute petitioned the NIH director Francis Collins and the Office of Laboratory Animal Welfare at NIH to remove this exemption.

According to an 18 December 2012 follow-up inspection by the USDA, two of the 12 animals found in poor health in October have since been euthanised as a result of their conditions, and some but not all of the sick goats are receiving appropriate medical treatment and monitoring.