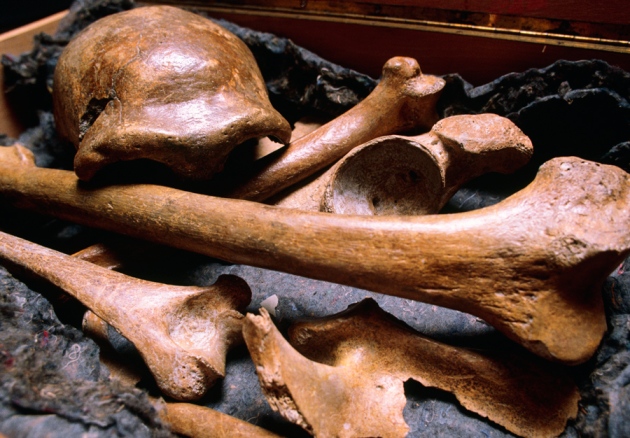 Tighter carbon dates for the remains of Neanderthals could help explain why they became extinct.

The carbon clock is getting reset. Climate records from a Japanese lake are set to improve the accuracy of the dating technique, which could help to shed light on archaeological mysteries such as why Neanderthals became extinct.

Carbon dating is used to work out the age of organic material — in effect, any living thing. The technique hinges on carbon-14, a radioactive isotope of the element that, unlike other more stable forms of carbon, decays away at a steady rate. Organisms capture a certain amount of carbon-14 from the atmosphere when they are alive. By measuring the ratio of the radio isotope to non-radioactive carbon, the amount of carbon-14 decay can be worked out, thereby giving an age for the specimen in question.

But that assumes that the amount of carbon-14 in the atmosphere was constant — any variation would speed up or slow down the clock. The clock was initially calibrated by dating objects of known age such as Egyptian mummies and bread from Pompeii; work that won Willard Libby the 1960 Nobel Prize in Chemistry. But even he “realized that there probably would be variation”, says Christopher Bronk Ramsey, a geochronologist at the University of Oxford, UK, who led the latest work, published today in Science1. Various geologic, atmospheric and solar processes can influence atmospheric carbon-14 levels.

Since the 1960s, scientists have started accounting for the variations by calibrating the clock against the known ages of tree rings. As a rule, carbon dates are younger than calendar dates: a bone carbon-dated to 10,000 years is around 11,000 years old, and 20,000 carbon years roughly equates to 24,000 calendar years.

The problem, says Bronk Ramsey, is that tree rings provide a direct record that only goes as far back as about 14,000 years. Marine records, such as corals, have been used to push farther back in time, but these are less robust because levels of carbon-14 in the atmosphere and the ocean are not identical and tend shift with changes in ocean circulation.

Bronk Ramsey’s team aimed to fill this gap by using sediment from bed of Lake Suigetsu, west of Tokyo. Two distinct sediment layers have formed in the lake every summer and winter over tens of thousands of years. The researchers collected roughly 70-metre core samples from the lake and painstakingly counted the layers to come up with a direct record stretching back 52,000 years. Preserved leaves in the cores — “they look fresh as if they’ve fallen very recently”, Bronk Ramsey says — yielded 651 carbon dates that could be compared to the calendar dates of the sediment they were found in.

The recalibrated clock won’t force archaeologists to abandon old measurements wholesale, says Bronk Ramsey, but it could help to narrow the window of key events in human history. “If you’re trying to look at archaeological sites at the order of 30,000 or 40,000 years ago, the ages may shift by only a few hundred years but that may be significant in putting them before or after changes in climate,” he says.

“If you have a better estimate of when the last Neanderthals lived to compare to climate records in Greenland or elsewhere, then you’ll have a better idea of whether the extinction was climate driven or competition with modern humans,” says Paula Reimer, a geochronologist at Queen’s University in Belfast, UK. She will lead efforts to combine the Lake Suigetsu measurements with marine and cave records to come up with a new standard for carbon dating.