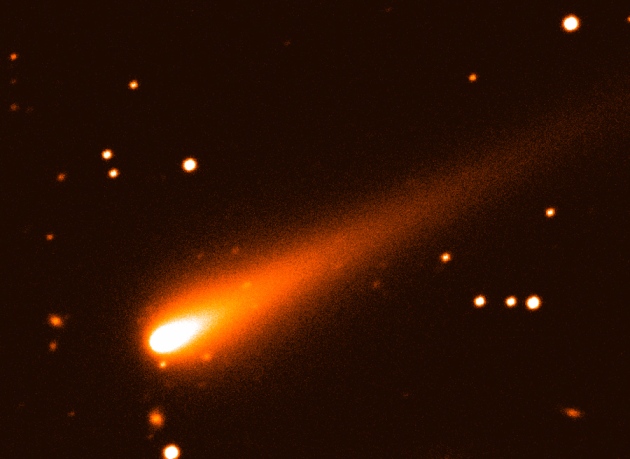 If ISON survives its brush with the Sun, it is expected to be visible to the naked eye.

Comet ISON is winging through the inner Solar System. Astronomers have one big question: will it survive flying past the Sun on 28 November?

If it does, ISON will probably be visible to the naked eye, blazing a path among the constellations in December. But even if the comet disintegrates, there should be plenty to learn from its journey. ISON represents the first time researchers have watched a 'dynamically new' comet — a pristine, first-time visitor from deep space that will not return — on course to pass very close to the Sun.

“That’s what makes it so unusual,” says Matthew Knight, an astronomer at Lowell Observatory in Flagstaff, Arizona. “There may be totally unexpected things that come up.” Knight, who has dedicated much of his time to observing the comet, says that ISON may be just big and dense enough to survive its close call with the Sun. He laid out his reasoning on 9 October at a meeting of the Division for Planetary Sciences of the American Astronomical Society in Denver, Colorado.

On 21 September 2012, Russian astronomers discovered ISON using a telescope with the International Scientific Optical Network (ISON), which became the comet’s namesake. Astronomers traced its origin to the edge of the Oort cloud, the reservoir of icy objects lying far beyond Pluto, and predicted that  it would fly past the Sun at a distance of just 2.7 solar radii.

Astronomers, both professional and amateur, have witnessed the destruction of more than 2,000 Sun-grazing comets that were ripped apart by tidal forces or vaporized by the star’s heat. Scientific insights can be gained from these cometary deaths: in 2011, astronomers watched how the tail of comet Lovejoy wavered as it passed through the solar atmosphere and used their observations to refine models of the Sun's magnetic field lines1.

Knight and Kevin Walsh, of the Southwest Research Institute in Boulder, Colorado, used mathematical simulations to study whether ISON will be ripped apart2. Observations from the Hubble Space Telescope, as well as smaller telescopes, suggest that ISON is between 1 and 4 kilometres across. Given characteristics of other comets that have survived close encounters with the Sun, such as 1965’s Ikeya-Seki, the team suggests that ISON is big enough not to be vaporized.

But Knight says that the comet could still be tidally disrupted, depending on how dense it is. If it has a typical density, ISON should make it mostly intact. If it is less dense, it may disintegrate as comet Shoemaker-Levy 9 did before colliding with Jupiter in 1994.

Astronomers will be looking for changes as ISON approaches the Sun, such as brightening in particular regions, or the formation of jets as volatile compounds start to boil off. They will also be looking for changes in speed or spin3. With so much advance notice that ISON is coming — Lovejoy, in 2011, gave just three weeks’ notice — astronomers have had time to marshal their resources. Along with many ground-based telescopes, NASA’s Swift mission, built to study gamma-ray bursts, has been imaging ISON (the US government shutdown that began on 1 October exempts active missions such as Swift).

Because it is above Earth's atmosphere, Swift can study comets in ultraviolet wavelengths, which reveal hydroxyl molecules spraying off the comet as a measure of how much water it produces as it warms up. Observations show a huge cloud of hydroxyl particles surrounding ISON. "It expands to a huge cloud, much prettier than I expected," says Dennis Bodewits, an astronomer at the University of Maryland in College Park.

ISON flew past Mars on 1 October, and the Mars Express and Mars Reconnaissance Orbiter (MRO) missions captured images as it did. MRO has released some early pictures, although images from both spacecraft are still being processed.

There will be a peak in observations of  ISON during the next few weeks. On 28 November, which is the US Thanksgiving holiday, Knight and others will not be celebrating with their families. Instead, they will be at a National Solar Observatory telescope near Tucson, Arizona, watching ISON’s every move before it begins its journey out of the Solar System, never to return. “We’ve only got the one shot at it,” says Knight.