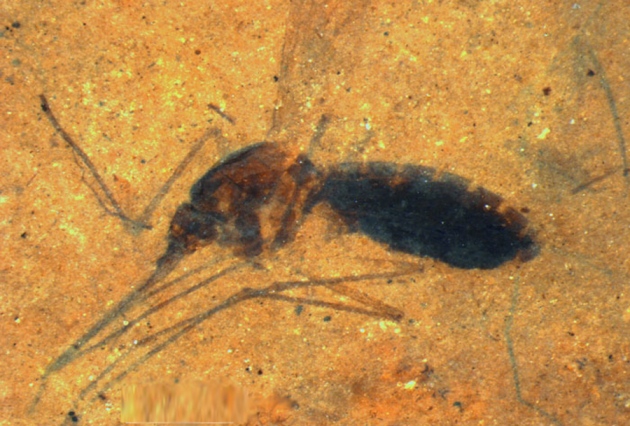 The fossil of a female mosquito containing chemical traces of its last blood meal is an extremely rare find.

Jurassic Park’s iconic image of a fossilized blood-filled mosquito was thought to be fiction — until now. For the first time, researchers have identified a fossil of a female mosquito with traces of blood in its engorged abdomen. A team led by Dale Greenwalt at the US National Museum of Natural History in Washington DC reports the fossil discovery today in Proceedings of the National Academy of Sciences1.

Although scientists have found fossils of suspected blood-sucking insects, the creatures' feeding habits have mostly been inferred from their anatomy or the presence of blood-borne parasites in their guts. But Greenwalt's fossilized mosquito contains molecules that provide strong evidence of blood-feeding among ancient insects back to 46 million years ago. It is a fortunate find. “The abdomen of a blood-engorged mosquito is like a balloon ready to burst. It is very fragile,” says Greenwalt. “The chances that it wouldn’t have disintegrated prior to fossilization were infinitesimally small.”

The insect was found not in amber, as depicted in Jurassic Park, but in shale sediments from Montana. After 46 million years, any DNA would be long degraded, but other molecules can survive. Greenwalt’s team showed that the insect’s abdomen still contains large traces of iron and the organic molecule porphyrin — both constituents of haemoglobin, the oxygen-carrying pigment found in vertebrate blood. These molecules were either rare or absent in the abdomen of a fossilized male mosquito (which does not drink blood) of the same age, found at the same location.

“This shows that details of a blood-sucking mosquito can be nicely preserved in a medium other than amber,” says George Poinar, who studies fossilized insects at Oregon State University in Corvallis. “It also shows that some porphyrin compounds in vertebrate blood can survive under the right conditions for millions of years.”

Greenwalt suggests that this provides support for the controversial claims of Mary Schweitzer, a palaeontologist at North Carolina State University in Raleigh, who has reportedly isolated haemoglobin traces from dinosaur bones2.