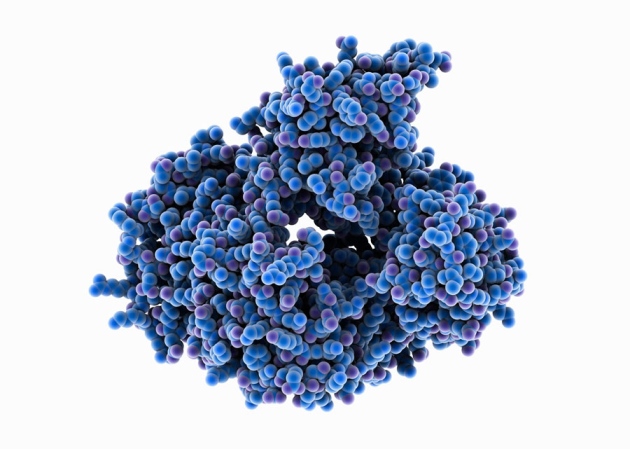 Argonaute proteins (model pictured) are one of many potential alternatives to the CRISPR–Cas9 gene-editing system.

The CRISPR–Cas9 tool enables scientists to alter genomes practically at will. Hailed as dramatically easier, cheaper and more versatile than previous technologies, it has blazed through labs around the world, finding new applications in medicine and basic research.

But for all the devotion, CRISPR–Cas9 has its limitations. It is excellent at going to a particular location on the genome and cutting there, says bioengineer Prashant Mali at the University of California, San Diego. “But sometimes your application of interest demands a bit more.”

The zeal with which researchers jumped on a possible new gene-editing system called NgAgo earlier this year reveals an undercurrent of frustration with CRISPR–Cas9 — and a drive to find alternatives. “It’s a reminder of how fragile every new technology is,” says George Church, a geneticist at Harvard Medical School in Boston, Massachusetts.

NgAgo is just one of a growing library of gene-editing tools. Some are variations on the CRISPR theme; others offer new ways to edit genomes.

CRISPR–Cas9 may one day be used to rewrite the genes responsible for genetic diseases. But the components of the system — an enzyme called Cas9 and a strand of RNA to direct the enzyme to the desired sequence — are too large to stuff into the genome of the virus most commonly used in gene therapy to shuttle foreign genetic material into human cells.

A solution comes in the form of a mini-Cas9, which was plucked from the bacterium Staphylococcus aureus1. It’s small enough to squeeze into the virus used in one of the gene therapies currently on the market. Last December, two groups used the mini-me Cas9 in mice to correct the gene responsible for Duchenne muscular dystrophy2, 3.

Cas9 will not cut everywhere it’s directed to — a certain DNA sequence must be nearby for that to happen. This demand is easily met in many genomes, but can be a painful limitation for some experiments. Researchers are looking to microbes to supply enzymes that have different sequence requirements so that they can expand the number of sequences they can modify.

One such enzyme, called Cpf1, may become an attractive alternative. Smaller than Cas9, it has different sequence requirements and is highly specific4, 5.

Another enzyme, called C2c2, targets RNA rather than DNA — a feature that holds potential for studying RNA and combating viruses with RNA genomes6.

Many labs use CRISPR–Cas9 only to delete sections in a gene, thereby abolishing its function. “People want to declare victory like that’s editing,” says Church. “But burning a page of the book is not editing the book.”

Those who want to swap one sequence with another face a more difficult task. When Cas9 cuts DNA, the cell often makes mistakes as it stitches together the broken ends. This creates the deletions that many researchers desire.

But researchers who want to rewrite a DNA sequence rely on a different repair pathway that can insert a new sequence — a process that occurs at a much lower frequency than the error-prone stitching. “Everyone says the future is editing many genes at a time, and I think: ‘We can’t even do one now with reasonable efficiency’,” says plant scientist Daniel Voytas of the University of Minnesota in Saint Paul.

But developments in the past few months have given Voytas hope. In April, researchers announced that they had disabled Cas9 and tethered to it an enzyme that converts one DNA letter to another. The disabled Cas9 still targeted the sequence dictated by its guide RNA, but could not cut: instead the attached enzyme switched the DNA letters, ultimately yielding a T where once there was a C7. A paper published in Science last week reports similar results8.

Voytas and others are hopeful that tethering other enzymes to the disabled Cas9 will allow different sequence changes.

In May, a paper in Nature Biotechnology9 unveiled an entirely new gene-editing system. Researchers claimed that they could use a protein called NgAgo to slice DNA at a predetermined site without needing a guide RNA or a specific neighbouring genome sequence. Instead, the protein — which is made by a bacterium — is programmed using a short DNA sequence that corresponds to the target area.

The finding kicked off a wave of excitement and speculation that CRISPR–Cas9 would be unseated, but laboratories have so far failed to reproduce the results. Even so, there is still hope that proteins from the family that NgAgo belongs to — known as Ago or Argonautes — made by other bacteria could provide a way forward, says genome engineer Jin-Soo Kim at the Institute for Basic Science in Seoul.

Other gene-editing systems are also in the pipeline, although some have lingered there for years. For an extensive project that aimed to edit genes in bacteria, Church’s lab did not reach for CRISPR at all. Instead, the team relied heavily on a system called lambda Red, which can be programmed to alter DNA sequences without the need for a guide RNA. But despite 13 years of study in Church’s lab, lambda Red works only in bacteria.

Church and Feng Zhang, a bioengineer at the Broad Institute of MIT and Harvard in Cambridge, Massachusetts, say that their labs are also working on developing enzymes called integrases and recombinases for use as gene editors. “By exploring the diversity of enzymes, we can make the genome-editing toolbox even more powerful,” says Zhang. “We have to continue to explore the unknown.”

An earlier version of this story incorrectly described Jin-Soo Kim's primary affiliation: it is the Institute for Basic Science in Seoul, not Seoul National University. The story also failed to reference an earlier study of Cpf1's specificity.