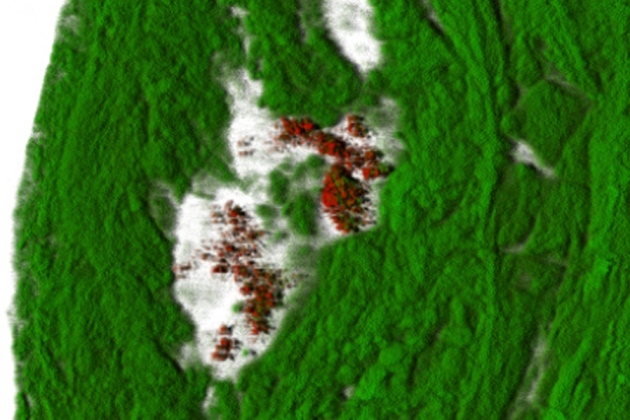 Biofilms (red) that attach to plaques could disperse and trigger blood clots in diseased arteries (green).

Stress has long been thought to trigger heart attacks, but the mechanism is unknown. Now, researchers think that bacteria could play a role. A study published today in mBio1 suggests that stress hormones can break up mats of bacteria growing on the fatty plaques in arteries, releasing the plaques and causing strokes or heart attacks.

Researchers have suspected for years that bacteria infect the plaques of hardened arteries. The plaques form a surface on which bacteria can attach and grow in masses called biofilms, held together in a scaffold. To test this, a team led by bacteriologist David Davies of Binghamton University in New York analysed arteries from 15 patients with cardiovascular disease. Using fluorescent tags that mark bacterial DNA, they discovered at least 10 species of bacteria clustered tightly around the plaques, including the biofilm-forming Pseudomonas aeruginosa.

If these biofilms are tightly attached to plaques, they may have an effect on cardiovascular disease, Davies says. Plaques in blood vessels are normally stable, but if they break up and enter the bloodstream, they can trigger blood clots that lead to heart attacks or strokes.

To test this idea, the researchers grew P. aeruginosa in artificial arteries made of silicone tubing and waited for the bacteria to form biofilms. They then flooded the tubes with the stress hormone noradrenaline, which caused the biofilms to break up.

The authors say that stress hormones in the blood trigger the body’s cells to release iron into the bloodstream. The iron causes bacteria such as P. aeruginosa to produce enzymes that sever the polymer bonds that hold the bacteria together in the biofilm matrix and attach the bacteria to the plaque. The plaque is broken up as collateral damage, Davies says. Although he says that much more research in animals and humans is needed, the work ”introduces a completely unexpected potential culprit” in the mystery of how plaques trigger heart attacks, he adds.

“It’s quite an intriguing hypothesis,” says microbiologist Primrose Freestone of the University of Leicester, UK. But she adds that the amount of noradrenaline that the authors used in the experiment is much higher than would be present in a human body.

Still, Freestone says, it is possible that noradrenaline levels are somewhat higher at the site of the plaque. And she says that the project could serve as a “springboard” for researchers to think more about the role of bacteria in cardiovascular disease.

Emil Kozarov, a microbiologist at Columbia University in New York, agrees that the idea is interesting. But he says that he would like to see whether noradrenaline breaks up plaques in mice injected with the biofilm bacteria, and whether noradrenaline disperses biofilms formed by other bacterial species.

Davies says that he plans to model the process in mice. He and his team are also planning to determine whether the arteries of healthy people contain biofilm-forming bacteria.