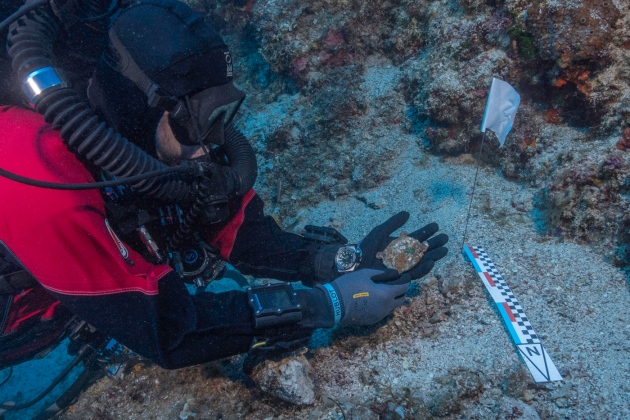 Archaeologist Brendan Foley discovers a bronze disc, at first thought to be part of the Antikythera mechanism.

Marine archaeologists investigating the ancient shipwreck that yielded the Antikythera mechanism — a complex, bronze, geared device that predicted eclipses and showed the movements of the Sun, Moon and planets in the sky — have recovered a wealth of treasures, including bronze and marble statue pieces, a sarcophagus lid and a mysterious bronze disc decorated with a bull. The artefacts were trapped under boulders in a previously unexplored part of the site near the island of Antikythera, Greece, and the researchers think that large parts of at least seven statues are still buried nearby.

The discoveries are “extremely exciting”, says Kenneth Lapatin, curator of antiquities at the J. Paul Getty Museum in Los Angeles, California. Only a handful of bronze statues survive from the ancient world, and they have almost invariably been treated and altered by previous conservators, undergoing processes that destroyed much of the information scientists might have gleaned from them. “Technology has improved so much,” says Lapatin. “We can learn from these untreated finds.”

The first-century-bc cargo ship, discovered in 1900 by sponge divers, is famous for yielding a heavily encrusted and corroded geared device that used to predict eclipses and chart the skies. The sponge divers also retrieved many other priceless items, including luxury glassware, jewellery and a two-metre-tall bronze statue, dating from the fourth century bc, nicknamed the ‘Antikythera youth’.

The bronze arm was one of the most significant recent findings.

The recovery of multiple ‘orphan’ statue pieces — limbs without matching heads or bodies, for example — suggested that several statues still lie buried here. So an international team of archaeologists and divers, co-led by Brendan Foley of the University of Lund in Sweden and Theotokis Theodoulou of the Greek Ephorate of Underwater Antiquities in Athens, is now re-excavating the 50-metre-deep wreck site to look for them.

The team has made a stream of discoveries since work began in 2014, including wine jars, giant anchors, gold jewellery and a human skeleton, which is now being analysed for DNA. But the statues have remained hidden until now.

On 4 October, the team announced that during a 16-day dive season the previous month, they found several major statue pieces, including two marble feet attached to a plinth, part of a bronze robe or toga, and a bronze male arm, with two fingers missing but otherwise beautifully preserved. A slim build and “turning hand” gesture suggest that the arm may belong to a philosopher, says Theodoulou.

In 1900–01, the sponge divers salvaged orphan limbs from a minimum of six bronze statues. The newly discovered arm pushes that total to at least seven, says Theodoulou. The team is particularly excited because the statue pieces were found in an area undisturbed by any previous excavations, buried beneath large boulders dislodged from Antikythera’s steep cliffs over the course of 2,000 years by periodic earthquakes. “We think this means that everything is down there still,” says Foley.

The discovery of seven bronze statues, if they could be recovered, would significantly boost the world’s total from this time period, which stands not much greater than 50, Lapatin estimates. Few of those are complete. And although these ancient figures might look beautiful, they are hard to study because the aggressive treatments by generations of conservators have altered and damaged the bronze.

Fresh, untreated finds such as those from Antikythera will give researchers the opportunity to use modern techniques to study a significant aspect of ancient Greek life — for example, by looking at casting methods, which precise alloys were used and whether the statues were made for export or had been previously displayed. Meanwhile, any heads found might enable researchers to identify the people depicted, and to compare their likeness with any existing portraits, for example, marble statues or images etched on coins. 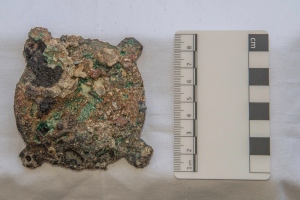 The bronze disc, which researchers at first thought might contain some of the lost gears of the Antikythera mechanism.

Foley and Theodoulou’s team also recovered an intriguing bronze disc or wheel, about eight centimetres across, attached to four metal arms with holes for pins. A layer of hardened sediment hides its internal structure, but it superficially resembles the Antikythera mechanism, and researchers had initially hoped that it might be part of that ancient device: perhaps the gearing that calculated the positions of the planets, which is missing from the find.

But preliminary X-ray imaging conducted in an Athens hospital on 25 September revealed a surprise: instead of gear wheels, the image of a bull appeared. The object might have been a decorative element, says Lapatin, perhaps attached to a box or a statue’s shield, or even — because of its sturdy construction — to the doomed ship. More-detailed radiography is planned for the next few weeks.

The X-rays of the bronze disc, and artist's reconstruction of the bull.

Other discoveries this season include a sarcophagus lid made from fine, red marble, more human remains and wooden ship planks and frames that the researchers hope will reveal information about the vessel’s size and shape.

The team plans to return to Antikythera in May 2018, to break up the boulders and excavate beneath. “It’s going to be a major operation,” says Foley. “But we think it will be spectacular.”