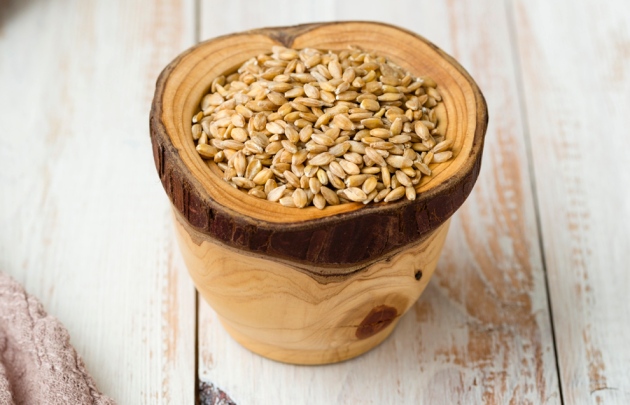 A bowl of Einkorn wheat, a cereal grain domesticated in Anatolia (modern-day Turkey) some 10,000 years ago. Ancient DNA matching this strain has been found in pre-Neolithic England.

Hunter-gatherers in ancient Britain may have imported cereals from Europe long before they turned to farming. Ancient DNA recovered from soil submerged beneath the English Channel suggests that wheat appeared in Britain some 2,000 years before Neolithic farmers began cultivating cereal grains there. But not all archaeologists are convinced by the new findings, which are reported in Science1.

The Mesolithic-to-Neolithic transition, when modern humans began to settle and grow food, marks a key step in the evolution of civilization and technology. In Europe, agriculture slowly spread from ancient Anatolia (modern-day Turkey), where domesticated plants including wheat were first farmed about 10,000 years ago, through the Mediterranean and central Europe. Archaeologists believe that farming did not reach the British Isles until about 6,000 years ago.

But wheat may not have been completely absent in pre-Neolithic Britain. At Bouldnor Cliff, a prehistoric site that lies just off the Isle of Wight and which is submerged under 11 metres of water, scientists have recovered DNA of wheat (Triticum) that matches Near Eastern strains.

The team found no cereal-plant pollen or any other archaeological evidence to suggest that wheat was grown at the site. The grain — or flour, from which the inhabitants of Bouldnor Cliff may have made basic dough — must have come from a distant place, perhaps from the Balkans or the south of France, which Neolithic farmers had already reached, the researchers conclude.

“Mesolithic Britain was not isolated from culturally more advanced mainland Europe as has been argued,” says Robin Allaby, an anthropologist and plant geneticist at the University of Warwick in Coventry, UK, who was involved in the study. “There was apparently some level of interaction, by trade or warfare or both. In any case, the peoples who frequented Bouldnor Cliff must have been aware of products and techniques developed in distant parts of Europe, and they seem to have imported goods and ideas to Britain.”

A possible land connection between Britain and Europe at the end of the last ice age might have made trading easier. Ten thousand years ago, rising sea levels — a result of melting glaciers — had already created the English Channel. But the study authors' reconstruction of coastlines, based on the age of marine sediments from the British east coast, supports the possibility that two small points of contact with northern France and the Netherlands still existed until about 7,800 years ago. But a land connection is not even necessary for the early arrival of wheat on the British Isles, says Allaby. “Peoples on both sides of the Channel would have been able at the time to traverse the shallow seas with boats,” he says.

Indeed, Bouldnor Cliff was the site of a Mesolithic boat-building yard. As the sea level rose further, the land there turned into a peat bog before it was inundated and eventually abandoned. But because the peat seals the ancient land surface, the former terrestrial soil and sedimentary DNA it includes are exceptionally well preserved. Preserved plant pollen in the sediment hints at an ancient landscape populated by oak, poplar and apple trees. DNA analysis and fossils suggest that dogs, wolves, deer and aurochs (an extinct large, wild ox) had roamed the land.

The researchers took pains to prevent other DNA from contaminating their samples. But genetic analysis is a relatively new addition to archaeologists’ toolbox, and some remain sceptical.

“Archaeology constantly throws up surprises, but these findings look puzzling to me,” says Peter Rowley-Conwy, an archaeologist at Durham University, UK. He points out that farming had hardly spread north of the Danube 8,000 years ago. “This seems too far for hunter-gatherer networks to extend,” he says. “Artefacts such as flint blades and arrowheads that appeared around that time from Portugal to the Urals never made it to Britain — it’s hard to believe that wheat should.”

The findings need to be confirmed in the greater context of existing archaeological research, he says. But Mesolithic settlements that could shed light on the issue are hard to find in mainland Britain. To understand how and when Neolithic culture arrived, says Allaby, "the answer probably lies under the sea".