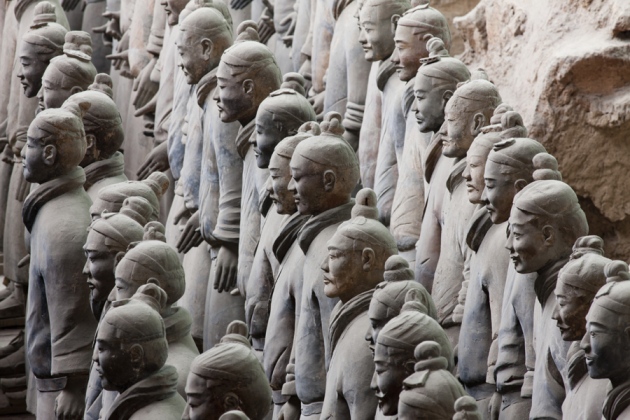 The terracotta army, which consists of individually sculpted warriors, was found inside the mausoleum of China’s first emperor, Qin Shi Huang.

It took hundreds of thousands of workers decades to create China’s terracotta army, but digital avatars made in minutes could solve the lingering mystery of one of the country’s most famous relics. By creating three-dimensional (3D) models of the 2,200-year-old collection of statues, archaeologists hope to confirm whether the soldiers were intended to represent a real army of distinct individuals.

Known broadly as computer vision, the technology was developed to enable machines such as factory robots and the Mars rovers to map a 3D world from camera images. But now it is quietly revolutionizing archaeology and palaeontology, allowing virtual bones, artefacts and whole excavation sites to be shared and studied without risk of damage.

“In the future, it’s highly likely that these sorts of methods will be the standard thing you do to record an archaeological site,” says Andrew Bevan, an archaeologist at University College London, who is part of a team using computer vision to build digital models of the terracotta army’s life-size warriors.

Since the army was discovered in 1974 in an emperor’s mausoleum near Xian, historians have debated whether the soldiers’ facial details were modelled on actual militiamen. “Are the warriors portraits of individual people? Or are they a ‘Mr Potato Head’ approach to individualism, where you slap on different noses and moustaches and ears?” Bevan says.

Computer-vision models might offer the answer, Bevan suggests. Digital photos can be taken quickly, cheaply and without disturbing the statues. Several dozen high-quality photos of a soldier, taken from multiple perspectives, can provide a computer algorithm with enough data to determine where each image was taken from and create a 3D map in a few minutes. The model — a set of x, y and z coordinates — can be plotted against other models, analysed and even used to make a cast with a 3D printer. 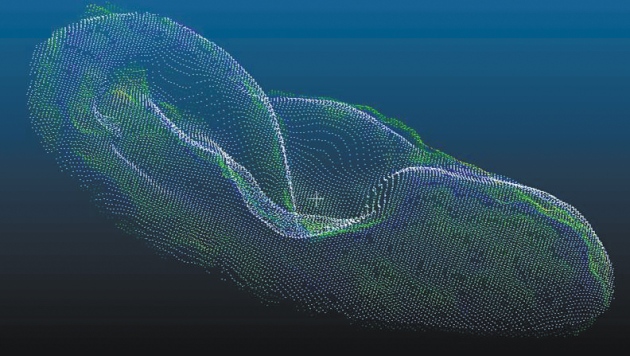 Superimposed 3D models (one in green, the other in white) reveal minute differences in ear shape.

In a pilot study published on 4 June, Bevan’s team modelled the faces of 30 warriors and found that no two ears were identical — evidence that the army consists of individuals (A. Bevan et al. J. Archaeol. Sci. http://doi.org/s7v; 2014). The researchers compared ears because these are unique and may have been modelled on real people. But they plan to analyse other anatomical features to see whether the soldiers vary in ethni­city or bear the hallmarks of distinct craftsmen. Bevan stresses that the work is at an early stage. 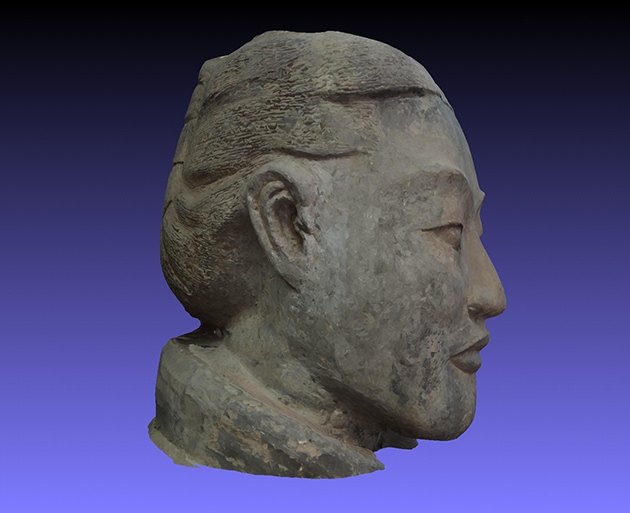 A computer-vision rendering of a soldier from the terracotta army. Click here to explore an interactive 3D model of the head, created by the team at University College London and the Emperor Qin Shi Huang's Mausoleum Site Museum.

Archaeologists and palaeontologists have used computer model­ling for decades, to map digs with laser scanners or study bones with computed tomography (CT), for example. But proponents of computer vision argue that these technologies are costly and not made for routine use in the field.

“You’re talking about having a camera versus having a £30,000 [US$50,000] piece of kit ready,” says Sarah Duffy, an archaeolo­gist at the University of York, UK. When 900,000-year-old footprints were found on eastern England’s Norfolk coast last year, she was part of a team that raced to photograph the scene and capture the footprints in 3D. The resulting model revealed that they had been left by a human ancestor — the oldest such relics discovered outside Africa (N. Ashton et al. PLoS ONE http://doi.org/rd2; 2014). The prints had nearly vanished by the time the researchers lugged a laser scanner to the site a week later.

Benjamin Ducke at the German Archaeological Institute in Berlin agrees that the technology has the potential to preserve sites that are disappearing. Last October, he used a drone equipped with a video camera to create a 3D map of a large pre-Columbian settlement in Mexico in a couple of days. His team, called Project Archaeocopter, plans to analyse sites in Uzbekistan and at Pompeii in Italy. With an infrared camera mounted on a drone, the technology could map archaeological sites obscured by dense forests, he says.

“We can expect to see entire collections of hundreds of thousands of objects digitally available.”

Powerful computer-vision software is affordable and readily available, but advocates such as Heinrich Mallison, a palaeontologist at Berlin’s Natural History Museum, see the technology as more than a time and money saver. “It means we can expect to see entire collections of hundreds of thousands of objects digitally available in a decade, so everybody can use these for research,” he says. Ducke thinks that the technology has the potential to break the “interpretative monopoly” of scholars whose theories prevail because others lack access to particular artefacts or remains.

Jean-Jacques Hublin, a palaeoanthropologist at the Max Planck Institute for Evolutionary Anthropology in Leipzig, Germany, expects museums to limit the creation and distribution of such models in their collections, in the same way as some have done for CT scans. Museums worry about losing control over their collections, but Hublin thinks that demand among scientists will inevitably push more collections online. With computer-vision technology in mind, in May the European Union began accepting applications for a €14-million (US$19-million) fund to create 3D models of examples of Europe’s cultural heritage.

But data theft is a worry, Mallison says. “I can go to a museum in Beijing, pull out my Canon, play tourist and do research on a high-resolution 3D model of their fossils.” Academics might not risk the backlash of collecting data without permission, but replica sellers could pillage museum collections with computer-vision software, says Mallison. He thinks that inter­national rules are needed to prevent this. Never­theless, he predicts that it is only a matter of time before 3D models of museum collections are widely available. “The question is, do we see it in 5 years or 10 years or 15 years?” he says.