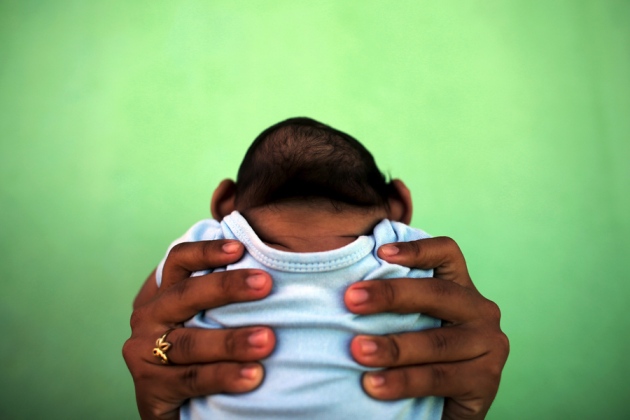 A protein that helps Zika virus infect adult skin cells might also give the virus access to stem cells that make brain cells, suggests a study carried out on donated human fetal tissue.

The result — published today in Cell Stem Cell1 — is part of a growing body of research that seeks to determine how Zika might cause birth defects, but that requires a type of tissue that is increasingly controversial for researchers in the United States.

Recent advances in neuroscience and cell technology have given hints as to why some babies born to Zika-infected mothers have abnormally small heads — a condition called microcephaly — and other problems, such as eye damage. But to fully understand what is happening in the womb, some scientists say that they need to study tissue from fetuses, which can be donated by couples who terminate pregnancies.

Researchers already knew that a protein called AXL enabled Zika to enter human skin cells. Now, Arnold Kriegstein, a neuroscientist at the University of California, San Francisco, and his colleagues show that the protein is also made by cells in the fetus that form the eye and the brain. AXL could provide a means for Zika virus to infect these cells.

“We can say for sure that Zika has the ability to infect neural progenitors, and this is a good explanation for why Zika is correlated with microcephaly,” she says.

Kriegstein says that the fetal tissue used in his study was donated by patients treated at UCSF medical facilities. But such tissue may be harder to come by, as the collection and use of fetal cells is under renewed scrutiny in the United States. Last July, an anti-abortion group called the Center for Medical Progress in Irvine, California, released video of employees from the non-profit health-care provider Planned Parenthood discussing the sale of fetal tissue from abortions for research. Members of the US House of Representatives are now investigating the use of fetal tissue in research.

US scientists worry that the controversy is affecting the availability of donated fetal tissue, and could thus hamper crucial research on the Zika virus. “Many fewer people are willing to donate, and it’s slowing us down,” says Susan Fisher, a stem-cell and developmental biologist at the University of California, San Francisco.

Fisher is studying how Zika virus is transmitted from mother to baby through the placenta, which carries blood and nutrients to the fetus during pregnancy. She has found AXL in fetal cells called trophoblasts that anchor the placenta to the mother's uterus. These cells are known to transmit infections such as cytomegalovirus from mother to baby. “This suggests that the placenta is extremely capable of transmitting Zika,” says Fisher, whose studies rely on fetal tissue donated from terminated and full-term pregnancies.

Carolyn Coyne, a virologist at the University of Pittsburgh in Pennsylvania, is also probing Zika transmission between mother and baby — but using cell lines and placentas donated after full-term pregnancies. She says that fetal tissue is particularly critical for studies of Zika because the virus appears to be able to harm a fetus throughout pregnancy4. “It is absolutely essential to study Zika infection in human fetal tissue,” says Coyne. “These types of studies need to extend to all stages of pregnancy.”

Because abortion is illegal or highly restricted in many Latin American countries, laboratory research on neural development in the regions hit hardest by Zika relies mainly on other types of human tissue, such as organoids. Researchers in Brazil, for example, are studying the lethality of different Zika viruses in neurons and organoids derived from cord blood.

Fisher used donated fetal tissue in part because an embryonic stem-cell line that she developed is ineligible for federal grant funding. Fisher derived this stem-cell line, which is capable of making trophoblast cells like those found in the placenta, from an eight-cell embryo. But current federal guidelines restrict funding for embryonic stem-cell research to cells derived from a blastocyst — an embryo about three days older than that which gave rise to Fisher's cell line.

Both Fisher and Kriegstein are planning further studies to test how Zika infects developing brain and placental cells. They argue that such studies are crucial to establish why the virus damages babies' brains, and whether this can be prevented.

The scientists will also use organoids and animal models, but they note that neither of these is a perfect substitute for human fetal tissue. For instance, researchers aren't sure how faithfully the growth of brain organoids replicates human brain development.

“It’ll be important to demonstrate in human tissue exactly how the virus is creating the pattern of damage that is emerging,” Kriegstein says. “In situations like this, where there’s considerable time pressure to try to unravel what’s going on and to protect the developing human brain, it’s especially important.”

The citation details for reference 1 were incorrect. They have now been updated.