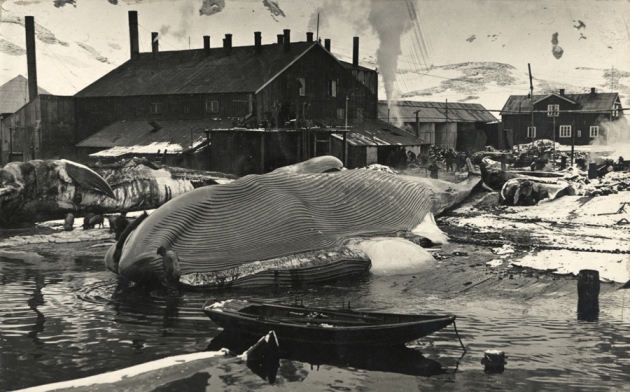 The Grytviken whaling station on South Georgia island in the First World War. It has long been abandoned.

The first global estimate of the number of whales killed by industrial harvesting last century reveals that nearly 3 million cetaceans were wiped out in what may have been the largest cull of any animal — in terms of total biomass — in human history.

The devastation wrought on whales by twentieth-century hunting is well documented. By some estimates, sperm whales have been driven down to one-third of their pre-whaling population, and blue whales have been depleted by up to 90%. Although some populations, such as minke whales, have largely recovered, others — including the North Atlantic right whale and the Antarctic blue whale — now hover on the brink of extinction.

But researchers had hesitated to put a number on the global scale of the slaughter. That was largely because they did not trust some of the information in the databases of the International Whaling Commission, the body that compiles countries’ catches and that manages whaling and whale conservation, says Robert Rocha, director of science at the New Bedford Whaling Museum in Massachusetts.

Rocha, together with fellow researchers Phillip Clapham and Yulia Ivashchenko of the National Marine Fisheries Service in Seattle, Washington, has now done the maths, in a paper published last week in Marine Fisheries Review (R. C. Rocha Jr, P. J. Clapham and Y. V. Ivashchenko Mar. Fish. Rev. 76, 37–48; 2014). “When we started adding it all up, it was astonishing,” Rocha says.

The researchers estimate that, between 1900 and 1999, 2.9 million whales were killed by the whaling industry: 276,442 in the North Atlantic, 563,696 in the North Pacific and 2,053,956 in the Southern Hemisphere. Other famous examples of animal hunting may have killed greater numbers of creatures — such as hunting in North America that devastated bison and wiped out passenger pigeons. But in terms of sheer biomass, twentieth-century whaling beat them all, Rocha estimates.

“The total number of whales we killed is a really important number. It does make a difference to what we do now: it tells us the number of whales the oceans might be able to support,” says Stephen Palumbi, a marine ecologist at Stanford University in California. He thinks that 2.9 million whale deaths is a “believable” figure. 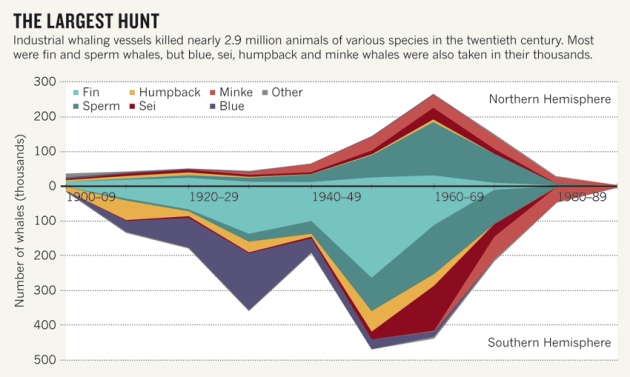 Sail-powered whaling ships took around 300,000 sperm whales between the early 1700s and the end of the 1800s. But with the aid of diesel engines and exploding harpoons, twentieth-century whalers matched the previous two centuries of sperm-whale destruction in just over 60 years. The same number again were harvested in the following decade. As one whale species became depleted, whalers would switch to another (see ‘The largest hunt’). Most commercial hunting was put on hold only in the 1980s.

“It’s an eye-opener for people to understand just how many whales were killed in the twentieth century alone. It shows how methodical and efficient whalers were,” says Howard Rosenbaum, a cetacean researcher who runs the Ocean Giants Program at the Wildlife Conservation Society, a non-governmental organization headquartered in New York City.

The latest estimate depended on detective work by Ivashchenko, who documented a huge illegal whaling operation in the Northern Hemisphere by the former Soviet Union for her 2013 doctoral thesis. Through interviews with former Soviet whalers and researchers, and reports from the whaling industry that she uncovered, she found that more than half a million whales had been caught by Soviet vessels, and that 178,811 of those were never declared to the International Whaling Commission.

Some researchers have used genetic data on certain populations to estimate how many whales existed before human hunting began. But the genetics has often suggested much larger original populations than the whaling records imply, says Rosenbaum. The estimates are now creeping closer together, he adds, as the genetics work improves and the catch data are revised upwards with inclusion of the true Soviet figures and other revisions. Understanding how many whales were taken from the oceans might mean that targets that define when a species has recovered need to be changed, he says.

Rocha adds that 2.9 million whales is a lower bound. Although motorized boats were more efficient than the original sailing vessels in capturing whales, some of the animals they mortally wounded would escape or not make it onto official records. “The actual number of whales killed is going to be more,” he says.