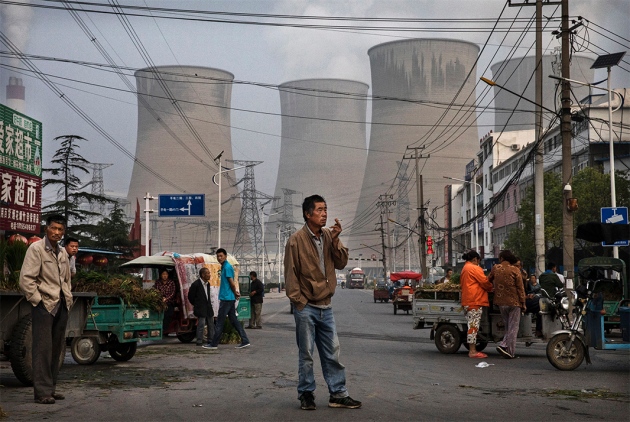 China, the world’s largest emitter of greenhouse gases, is trying to reduce its reliance on coal.

Humanity’s carbon emissions are likely to surge by 2% in 2017, driven mainly by increased coal consumption in China, scientists reported on 13 November1–3. The unexpected rise would end a three-year period in which emissions have remained flat despite a growing global economy.

Researchers with the Global Carbon Project, an international research consortium, presented their findings at the United Nations climate talks in Bonn, Germany. Countries there are ironing out details of how to implement the 2015 Paris climate accord, which calls for limiting global warming to a rise of 1.5–2 °C. The projected jump in the world’s greenhouse-gas output underlines the challenges ahead; if the latest analysis proves correct, global carbon dioxide emissions will reach a record-breaking 41 billion tonnes in 2017.

“We were not particularly surprised that emissions are up again, but we were surprised at the size of the growth,” says Corinne Le Quéré, a climate scientist at the University of East Anglia in Norwich, UK, and co-author of the work, which was published in the journals Nature Climate Change, Environmental Research Letters and Earth System Science Data Discussions. To Le Quéré, the question now is whether 2017 is a temporary blip or a return to business as usual. “If 2018 is as big as 2017, then I will be very discouraged,” she says.

Several factors caused the world’s CO2 emissions to level out from 2014 to 2016, including an economic slowdown in China, the world’s largest emitter; a shift from coal to gas in the United States; and global growth in the use of renewable energies such as solar and wind. Many climate scientists and policymakers had hoped that the pause in emissions growth represented a shift in energy use that would eventually cause global greenhouse-gas emissions to peak — and then decline.

The latest analysis projects that CO2 emissions in the United States and the European Union will continue to decline — by 0.4% and 0.2%, respectively, in 2017 — although at a slower pace than in recent years. And emissions growth in India is set to slow, rising by just 2% this year, compared with an average of 6% per year over the past decade.

But the picture is very different in China, which produces nearly 26% of the world’s output of CO2. This year, the country’s emissions of the greenhouse gas are expected to surge by 3.5%, to 10.5 billion tonnes. The main causes are increased activity at the country’s factories and reduced hydroelectric-energy production, the Global Carbon Project analysis finds.

The effort highlights nagging uncertainties about greenhouse-gas emissions trends, particularly in China, India and other countries with economies that are rapidly growing and changing, says David Victor, a political scientist at the University of California, San Diego. He is not convinced that government actions — at the national or international level — have driven the recent levelling of emissions. And although emissions are projected to grow this year, Victor says that China is still on a trajectory that would see its emissions peak well before its 2030 target.

Taken together, the projections for 2017 reinforce the notion that the world has far to go before it solves the climate problem, says Glen Peters, a climate-policy researcher at the CICERO Center for International Climate Research in Oslo and a co-author of the Global Carbon Project’s 2017 analysis.

“This is basically saying that we are not safe yet,” Peters says. “We can’t be complacent.”