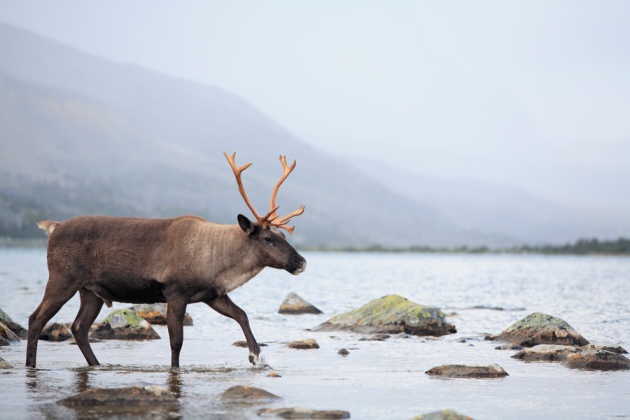 Since 2005, the Canadian government has shot nearly 1,000 wolves to protect a herd of threatened boreal caribou in the forests of Alberta, Canada. But a recent study suggests that this approach has limited benefit.

It is enough to keep the population of caribou from shrinking further, but it will not allow the animals — a geographically distinct population of Rangifer tarandus, which in Europe is known as the reindeer — to increase their number, finds the November analysis published in the Canadian Journal of Zoology1. Such an increase would require placing new limits on industrial development in Alberta, a conclusion that adds fuel to an ongoing debate about the ecological consequences of human activity in the boreal forest.

Caribou have been listed as threatened since 2002, mainly because much of their boreal forest habitat has been sliced into small fragments by a web of roads, pipelines, clear-cut swathes and well pads. Moose and other deer species do well in these open areas, and their populations have boomed — supporting an increasing population of wolves, which have learned to use the roads and pipelines to access caribou hiding in the deep woods.

Dave Hervieux, a biologist at the Alberta Environment and Sustainable Resource Development ministry, led a team that studied the government wolf-control programme in the Little Smoky range in western Alberta. The ministry has shot or poisoned 980 wolves there since 2005 to protect a herd of fewer than 100 caribou.

From 2000 to 2012, researchers flew helicopter surveys of caribou cows and calves each March, using signals from special collars to help to locate animals. After the wolf-control programme began, the number of calves that survived to about 9 months old rose from an average of 2 calves per 100 cows to an average of 19 calves.

The Little Smoky caribou population, which had been crashing, stabilized — but did not grow. Yet Hervieux says that ending the wolf kills is not an option. “If predator management stopped, the caribou would be done,” even if industrial activity halted, he argues. He adds that it might take 30 years for the boreal forest to regrow to the point at which caribou would no longer be at a disadvantage.

The situation presents an ethical quandary, says Dan MacNulty, a wolf biologist at Utah State University in Logan. “What is better, killing off these wolves or watching these caribou blink out because of our appetite for cheap oil and gas?” he asks.

Conservationists in Alberta reluctantly supported the wolf kill programme when it began, says Carolyn Campbell, a conservation specialist at the Alberta Wilderness Association in Calgary. But her group later stopped its support for the programme because because drilling and logging continued, posing other threats to caribou. "It is a completely unethical approach to just declare a war on wolves when they are a symptom and not a root cause,” Campbell says.

Despite classifying the caribou as threatened, the Canadian government released a strategy to help the population to recover only after lawsuits by environmental groups and tribes in 2012. Many of the required provincial and territorial range plans, which would spell out actions to protect caribou, have yet to appear.

That includes Alberta’s plan. Government officials, conservationists and industry officials all say that it is unclear what the document might include or when it would be released.

In the meantime, several timber companies have the right to remove trees in the Little Smoky range; Nature contacted several, and one, the Alberta Newsprint Company, responded. Spokesperson Gary Smith says that the company has observed a moratorium on new logging in the range since summer 2013, but last year cut down trees in three previously approved patches as permitted by law.

And whereas sales of oil leases in the Little Smoky range have halted, they continue in other highly fragmented caribou ranges. The two government agencies that regulate oil and gas activity in the province — Alberta Energy, which sells leases, and the Alberta Energy Regulator, which approves specific energy-development activities by leaseholders — each say that the other agency made the key decision to allow energy development in a critical habitat for a threatened species.

This culture of development, plus the dire straits that many boreal caribou populations are in, has prompted study co-author Mark Hebblewhite, a biologist at the University of Montana in Missoula, to consider whether saving the animals will require a radically different approach. “Pick two herds. Fence them. Remove predators non-lethally and just farm caribou,” he says. “That is how bad it is.”