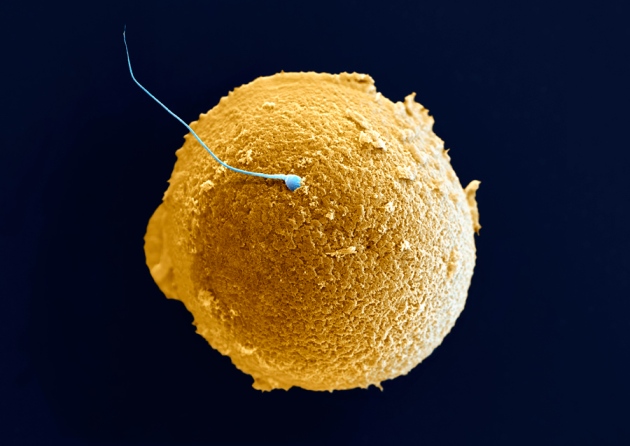 Human sex cells, or gametes, are produced early in the developing embryo.

Animals and plants prepare their cells for sex in very different ways — but no one knows why. A team of UK researchers now thinks that it has worked out the puzzle.

Humans and animals set themselves up for sex well before the act will ever take place. At the earliest stages of life, in the embryo, our germ cells begin to develop. These are the cells that will go on to form the sperm and the egg, with half the usual number of chromosomes. In females, eggs are set aside and kept in arrested development until they are needed. After puberty, males produce sperm continuously throughout life, but a specialized germ line is created early on from which sperm are made.

But corals, sponges and plants make no such cellular plans. They initially develop only body (somatic) cells, each with a full complement of chromosomes. When the time comes to mate, they produce their sex cells, or gametes, as needed by forming them out of stem cells from adult tissue.

Why the difference? According to biochemist Nick Lane of University College London, more complex animals create a devoted germline to preserve the quality of their mitochondria — specialized energy-producing structures in cells that sit outside the nucleus and have their own genes.

In a mathematical model published on 20 December, Lane and his coworkers lay out their argument. According to the team, the problem for humans and other complex animals is that if cells were allowed to divide repeatedly and form adult tissues before some of them were turned into gametes, then their mitochondria would rapidly accumulate genetic mutations and errors. Some of the gametes might acquire a high load of these mutated mitochondria, leading to poor-quality tissues in the offspring. Producing all the eggs needed early on avoids this problem.

The idea of ‘protecting’ mitochondrial DNA in quiescent eggs has been suggested previously1. But there’s a problem with that picture: some mutation is good for our mitochondria. Mutation is the engine of evolution, enabling advantageous mitochondrial genotypes to arise. Gametes made out of repeatedly replicated adult cells could therefore have useful variation. Evolution could preserve ‘good’ mutations and eliminate ‘bad’ ones, ultimately improving mitochondrial quality.

There’s a delicate balance between the benefits and drawbacks of having a germline. How do you get enough variation between gametes for selection to act, without building up mutations that will impair an organism made from those gametes?

The model devised by Lane and colleagues, reported in PLoS Biology2, offers a potential explanation for why various organisms find different compromises.

In more complex animals, the error rate in mitochondrial gene replication is relatively high. In that case, the best solution is to have a limited burst of cell division to form the female gamete precursors, giving many more germline cells than are needed, and then to cull most of them to produce a random selection of variants. This process, called atresia, is found in many organisms, including humans, but its function had puzzled scientists.

Once a nicely varied population of female gametes is obtained, further division is stopped so as not to risk accumulating too many mitochondrial mutations later in development. Such mutations do accumulate in sperm, which undergo many more rounds of cell division than do eggs. But that doesn’t matter, because their mitochondria are jettisoned when an egg is fertilized, and so are not passed on to the next generation.

But in plants and ‘basal’ animals such as corals and sponges, the error rate in mitochondrial gene replication is quite low. In this case, there’s less need to avoid replicating mitochondrial genes, and so gametes are formed later in development, reaping the benefits of genetic variation without risking poor-quality mitochondria.

Quite why the difference in replication error rates exists in the first place is still a mystery. It could be because changes in feeding strategy as early animals diversified — from filter feeding to mobile predation — drove an increase in aerobic activity, requiring more oxygen and therefore the need to pack more mitochondria into a cell, raising the error rate of replication.

The new work is “a thought-provoking study”, says biomathematician Iain Johnston of the University of Birmingham, UK. “Their case is plausible and rather inventive.” But he points out that the error rate of mitochondrial DNA replication, even within a species, is not a given — it, too, can change under selective pressure.

The model explains several diverse aspects of sexual reproduction, says Lane, but testing it will be challenging. “There is no possible experiment that could give an insight into such a broad sweep of natural history,” he says. “Only theory and modelling has the potential to get at it.”

Johnston, however, says the model is partly testable, and at least falsifiable. “The discovery of an organism with a high copying error rate that hasn’t sequestered a germ line — or one with a low error rate that has — would provide evidence against the theory," he says.

Lane adds that it should also be possible, using the model, to generate predictions about the relationship between atresia and the mitochondrial variance between gametes. Those predictions could then be checked against data from real organisms.