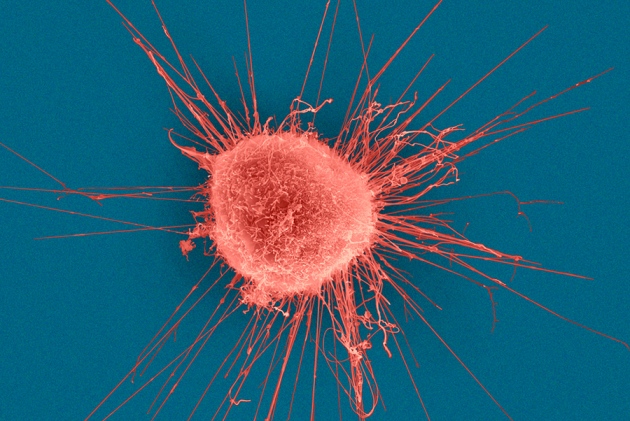 Breast-cancer cells might be susceptible to drugs that masquerade as antibodies to sidestep defences.

After decades of frustration, efforts to develop antibodies that can ferry drugs into cancer cells — and minimize damage to healthy tissue — are gathering steam. The next generation of these ‘weaponized antibody’ therapies, called antibody–drug conjugates (ADCs), is working its way through clinical trials.

Researchers will gather to discuss this renaissance on 30 November at the Symposium on Molecular Targets and Cancer Therapeutics in Munich, Germany. The improvements come after the first wave of experimental ADCs failed to deliver on its promise.

“Initially there was a lot of excitement, and then slowly many of them did not work,” says Raffit Hassan, a cancer researcher at the US National Cancer Institute in Bethesda, Maryland. Now, he says, there are two new ADCs in phase III clinical trials, and many more in earlier-stage testing.

The concept that underlies these drugs is simple: repurposing an antibody as a vehicle to deliver a toxic drug into a cancer cell. When the antibody in an ADC seeks out and docks onto a tumour cell, the cell takes it up and cleaves the molecular links that bind the drug to the antibody. This frees the drug to kill the cell from within.

But this approach has proved tricky to realize. Sometimes the molecular linkers are too tight, and do not release the drug inside the cell. Sometimes they are too unstable, and release the drug near healthy cells — limiting the dose that can be administered. Even the drugs themselves can be problematic: because most are toxic mainly to rapidly dividing cells, they can leave behind the slowly dividing cells that seed some tumours. And some have had trouble penetrating more than a few cell layers into their target tumours.

Researchers have been chasing ADCs for decades, Hassan says. The US Food and Drug Administration has approved three, but one was subsequently withdrawn from the market amid concerns that it was not effective and posed safety risks. The other two have met a happier fate: sales of Adcetris (brentuximab vedotin), approved in 2011 to treat lymphoma, and Kadcyla (trastuzumab emtansine), approved in 2013 to treat breast cancer, have been encouraging, says Ryan Million, head of the San Francisco office of the life-sciences and health-care consultancy firm Trinity Partners.

The approvals gave investors confidence in the field and sent researchers into a frenzy to improve their designs. More than 40 ADCs are now in clinical testing. Genentech, the biotechnology firm in South San Francisco, California, that developed Kadcyla, is experimenting with alternative drugs and molecular linkers. “Chemistry efforts have gotten more sophisticated in making decisions about which linker will go with each drug,” says Bernard Fine, a group medical director at the firm. The company is now working on nine ADCs.

Researchers are also mining a wealth of data from cancer-sequencing projects in search of new targets for antibodies to latch onto, says Stéphane Depil, medical director of the cancer immunotherapy programme at the Centre Léon Bérard in Lyon, France. Identifying those that are unique, or nearly so, to cancer cells has been a major challenge, he says. But growing interest in harnessing the immune system has led researchers to catalogue unique proteins expressed on the surface of malignant cells.

Some companies are trying to hit familiar targets with entirely new designs. Mersana Therapeutics, a biotechnology firm in Cambridge, Massachusetts, has attached both an antibody and a drug to a biodegradable polymer, rather than linking them to each other. This allows the company to attach 15 molecules of the drug to each polymer, rather than the usual three or four, says chief scientific officer Timothy Lowinger. Mersana is testing its approach in early clinical trials of a drug conjugate that targets HER2, a protein expressed at high levels in some breast-cancer tumours. Kadcyla targets HER2, too, but Lowinger says that Mersana’s version can bring in more drug per target, so it could be useful against cancers that express only low levels of HER2.

And at Tarveda Therapeutics, a biotechnology company in Watertown, Massachusetts, researchers have dispensed with the antibody altogether. Instead they are using a short strand of amino acids, the building blocks of proteins, to target cancer cells. The result is a drug that is about 15 times smaller and likely to penetrate deeper into the tumour, says Richard Wooster, Tarveda’s president of research and development.

Even with all this activity, the technology has not reached its peak, says Million. “There’s still lots to innovate,” he says. “But when it works, I think it will work powerfully.”