Dark streaks that hint at seasonally flowing water have been spotted near the equator of Mars1. The potentially habitable oases are enticing targets for research. But spacecraft will probably have to steer clear of them unless the craft are carefully sterilized — a costly safeguard against interplanetary contamination that may rule out the sites for exploration.

River-like valleys attest to the flow of water on ancient Mars, but today the planet is dry and has an atmosphere that is too thin to support liquid water on the surface for long. However, intriguing clues suggest that water may still run across the surface from time to time.

In 2011, for example, researchers who analysed images from NASA's Mars Reconnaissance Orbiter (MRO) spacecraft observed dark streaks a few metres wide that appeared and lengthened at the warmest time of the year, then faded in cooler seasons, reappearing in subsequent years2. "This behaviour is easy to understand if these are seeps of water," says planetary scientist Alfred McEwen of the University of Arizona in Tucson, who led that study. "Water will darken most soils."

The streaks, known as recurring slope lineae, initially were found at seven sites in Mars's southern mid-latitudes. The water may have come from ice trapped about a metre below the surface; indeed, the MRO has spotted such ice in fresh impact craters at those latitudes. 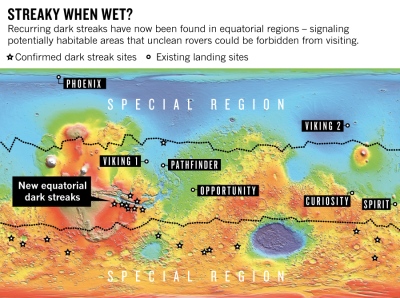 McEwen and his colleagues have now found the reappearing streaks near the equator, including in the gargantuan Valles Marineris canyon that lies just south of it. The MRO has turned up 12 new sites — each of which has hundreds or thousands of streaks — within 25 degrees of the equator. The temperatures there are relatively warm throughout the year, says McEwen, and without a mechanism for replenishment, any subsurface ice would probably already have sublimated.

He says that this suggests that water may come from groundwater deep in the crust, which could have implications for Martian life: "The subsurface is probably the best place to find present-day life if it exists at all because it is protected from the radiation and temperature extremes," he says. "Maybe some of that water occasionally leaks out onto the surface, where we could see evidence for that subsurface life."

Yet the possibility of running water could put the sites off-limits for future spacecraft unless they are carefully sterilized. The international guidelines of the Committee on Space Research (COSPAR) of the Paris-based International Council for Science say that sites that may host life, called 'special regions', should only be visited by probes that have been thoroughly treated to prevent microbes from hitching a ride from Earth. "You wouldn't want to send a dirty spacecraft to these places because you'd have the potential to not discover what you're looking for, but what you took with you," says John Rummel, chair of COSPAR's panel on planetary protection.

Spacecraft or their components that come into contact with special regions have to be sterilized meticulously with heat, hydrogen peroxide vapour or ionizing radiation to kill off as much Earth life as possible, rather than simply swabbed with alcohol. This raises the price of a mission, which could effectively end an intended visit to one of these areas, says McEwen. Indeed, heating the two Viking spacecraft in the 1970s is estimated to have represented 10% of the mission's cost. But Rummel says that trustworthy results justify added costs.

Rummel and McEwen are part of an advisory group to NASA that is studying what should be classified as a special region — currently defined as an area that gets warmer than –25°C for a few hours a year and has available water. The group is expected to present a report to COSPAR in August. Rummel says that regions with reappearing streaks could be added to the special regions under the current definition because of their potential connection with water.

But even though McEwen says that water is the most likely explanation for the streaks, he is not sure of the sources. Some of the streaks seem to begin at the tops of ridges, too close to the surface to easily be explained by subsurface aquifers. So the water may come instead from atmospheric water vapour that is pulled into salts in the soil and later released.