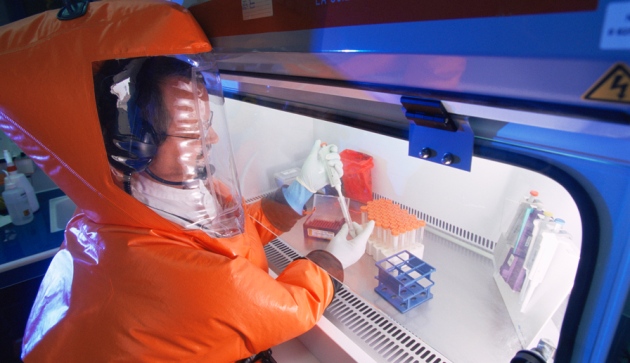 US authorities may hike biosecurity requirements for some avian flu research.

Earlier this month, US health agencies added the SARS virus to its list of select agents — pathogens and toxins that it deems to have the “potential to pose a severe threat to public health and safety”. In addition, the agencies last week opened a public consultation about whether they should designate strains of H5N1 avian influenza virus that are transmissible between mammals as ‘Tier 1’ select agents — a newly created class subject to the strictest levels of biosecurity. The consultation comes after the Intragovernmental Select Agents and Toxins Technical Advisory Committee advised the agencies that the virus could “potentially overwhelm the health care system”.

The listing of the SARS virus as a select agent — along with two recently discovered haemorrhagic-fever viruses, Lujo and Chapare — means that dozens of US labs holding the virus have until 3 April to either upgrade the bio­security of their labs or destroy or transfer their stocks. The US government estimates that 38 of the labs — 10 academic, 22 commercial and 6 government labs — do not currently have the extra biosecurity measures required to carry out select-agent research, including stricter lab-access rules and vetting of staff.

Shinji Makino, a SARS researcher at the University of Texas Medical Branch in Galveston, whose biosafety-level-3 (BSL-3) lab is one of the 38 affected, is “disappointed” by the move. His university owns the BSL-4 Galveston National Laboratory, which has the highest biosafety containment rating and so is select-agent compliant, and Makino is now seeking lab space there to continue his research.

The restrictions could interfere with sharing the virus or reagents between labs based in the United States or overseas, warns Michael Buchmeier, deputy director of the Pacific Southwest Center of Excellence for Bio­defense and Emerging Infectious Diseases at the University of California, Irvine. “The threat of criminal prosecution and severe penalties will have a chilling effect on the kinds of collaborative efforts that have characterized SARS work up until now,” he says.

For H5N1 researchers, the proposal to add mammalian-transmissible forms of the virus to the Tier 1 list is the latest twist in a year-long international storm that erupted over experiments by Ron Fouchier at the Erasmus Medical Center in Rotterdam, the Netherlands, and Yoshihiro Kawaoka at the University of Wisconsin–Madison. Critics have questioned the benefits of the work, which showed that a few genetic tweaks allowed the avian virus to spread easily in ferrets, an animal model used for research into human flu. They say that if this virus escaped from a lab it might cause a pandemic in humans. In the face of these concerns, flu researchers agreed last January to a self-imposed moratorium on such work, which has yet to be lifted.

The US Department of Agriculture already lists H5N1 as a select agent on the basis of the risks to animal health. But labs handling Tier 1 select agents must take security precautions that go beyond the already stringent requirements for handling select agents. These include instituting extra physical barriers, video surveillance and stricter staff vetting and monitoring.

The Tier 1 subset of select agents was created following the FBI’s conclusion that a government scientist, Bruce Ivins, was responsible for the anthrax mailing attacks in 2001. It became effective on 5 October and includes the pathogens responsible for smallpox, Ebola, anthrax, foot-and-mouth disease and rinderpest (see ‘Top tier’).

The Department of Health and Human Services and the Centers for Disease Control and Prevention proposed adding some forms of H5N1 to the list on 18 October, and the public, as well as scientists, have 60 days to respond. If the extra restrictions are imposed, they are likely to influence the way the research is regulated globally, because the United States is the largest funder of flu work.

Not before time, claim the critics. Mammalian-transmissible H5N1 viruses definitely meet all the stated criteria for a Tier 1 select agent, given their potential deadliness, the lack of immunity in humans and the absence of sufficient drugs or vaccines to cope with a pandemic, says Richard Ebright, a molecular biologist and biodefence expert at Rutgers University in Piscataway, New Jersey.

But Fouchier argues that by creating a burden that would keep all but a few labs from working on the virus, listing H5N1 as a Tier 1 agent could ultimately make the world less secure. “We need as many labs to do research as possible, as this virus remains a direct threat to animal and public health,” he says. “Restricting the research on this pathogen will not increase global safety and security; it will make things worse.”