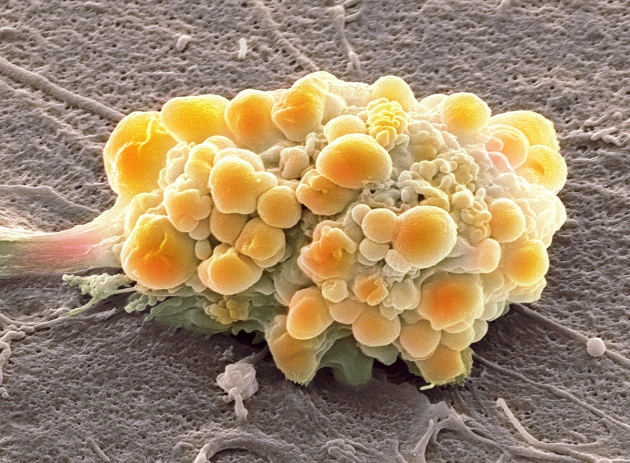 The cell line U87 came from a glioma (such as the tumour shown here) — but beyond that its origin is unknown.

Biomedical scientists are often urged to check that their cell lines are not contaminated or mislabelled. But as a new study shows, any effort to authenticate a cell line is only as good as the reference standard against which the cells are compared.

A cell line that is widely used to study brain cancer does not match the cells used to create the line nearly 50 years ago, or the tumour purported to be its source, researchers report on 31 August in Science Translational Medicine1. In fact, no one is quite sure of the true provenance of the cell line distributed by most cell repositories.

“It is a good cautionary tale to say, ‘Question your assumptions and do as many appropriate controls as you can to make sure you really have what you think you have,’” says Jon Lorsch, director of the US National Institute of General Medical Sciences in Bethesda, Maryland.

And because few cell lines are ever verified against their primary-source material, “this paper is probably just the tip of the iceberg”, says Christopher Korch, a geneticist at the University of Colorado Denver.

Many groups are trying to tackle the problem of misidentified cell lines to improve the reproducibility of research findings. This year, the US National Institutes of Health started requiring grant applicants to describe how they will authenticate their cell lines. And journals such as Nature have recently begun to ask authors to check their cells against a database of 475 lines (and counting) that are known to be mixed up.

But no organizations have called for the kind of archival sleuthing that produced the new study. “It’s hard enough to get people to do the standard authentication,” says Leonard Freedman, president of the Global Biological Standards Institute, a non-profit organization in Washington DC that has found that most life scientists never authenticate their cells2. “This is much more elaborate.”

The cell line in question, U87, was established in 1966 at Uppsala University in Sweden, using tissue from a 44-year-old woman with an aggressive brain cancer known as glioblastoma. U87 has since become a workhorse of brain-cancer research, subject to countless investigations that have yielded around 2,000 scientific papers.

The enthusiasm for U87 initially puzzled Bengt Westermark, a tumour biologist at Uppsala. “I couldn’t understand why people would work with such boring cells,” he says. As a graduate student in the 1970s, Westermark studied eight different brain-cancer cell lines. U87 was “hopeless to work with”, he says, because it grew so much more slowly than the others.

Years later, Westermark got his hands on the version of U87 that is distributed by the American Type Culture Collection (ATCC), a cell repository in Manassas, Virginia, that houses the world’s largest collection of biological materials. He could see from the cells’ growth properties that this U87 was clearly different from the cells that had given him so much grief in graduate school. Westermark decided to do a formal comparison.

Fortunately, Uppsala still had the preserved tumour tissue that spawned the original cell line. This enabled Westermark’s team to verify the identity of the archival U87 sample in their freezer. The researchers then used DNA-fingerprinting techniques to show that the ATCC’s U87 was different — and that it didn’t match any other cell lines created at Uppsala, either.

According to Mindy Goldsborough, ATCC’s chief science and technology officer, the repository acquired its U87 line in 1982 from the Memorial Sloan KetteringCancer Center in New York City, which itself had received the cell line from Uppsala in 1973. And by the time it arrived at the ATCC, U87 had a Y chromosome — despite the fact that it was supposed to have come from a female patient. This suggests that the mix-up probably happened at Sloan Kettering or during one of the hand-offs.

In light of the new revelations, the ATCC now plans to update the background details in its listing for U87, which it describes as male. But the origin of the U87 line remains a mystery.

A comparison of gene-expression profiles conducted by Westermark's team suggests that the ATCC cell line probably came from a brain tumour. “It’s bad news that it’s not what it should be,” Westermark says, “but it’s good news that it’s probably a glioblastoma.” This means that studies of U87 still reflect brain-cancer biology and don’t need to be tossed out, he adds.

Still, many cancer researchers think that it is time to move beyond U87 and other “classical” cell lines — regardless of where they came from — because the culture conditions historically used to grow the cells change their biological nature. Westermark and others now favour newer cell lines that have been propagated on the types of growth medium that ensure genetic and epigenetic stability. Through its Human Glioma Cell Culture biobank, Uppsala provides these sorts of cells to other researchers for a small processing fee.

“There is an increasing understanding that what we’ve historically used is so poorly representative of the human disease,” says Howard Fine, a neuro-oncologist at the Weill Cornell Brain Tumor Center in New York City. “So, any time someone can shoot down the [U87] cell line, I’m happy.”