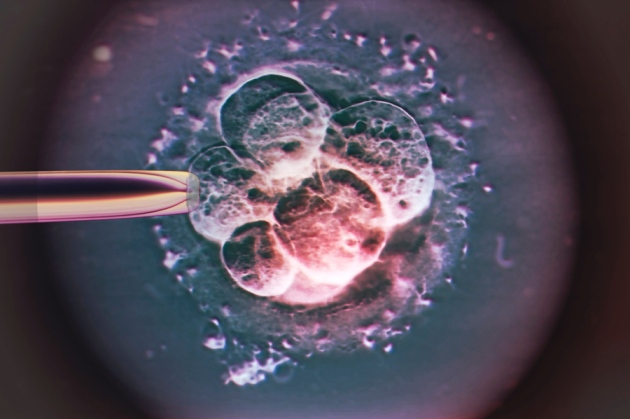 Replacing diseased mitochondria in a human embryo could prevent the transmission of some inherited diseases.

The US Food and Drug Administration (FDA) should approve clinical trials of a gene-therapy technique to create embryos with genetic material from three people, the US National Academies of Sciences, Engineering and Medicine said on 3 February. The goal would be to prevent mothers from passing down disabling or fatal genetic disorders.

The controversial gene-therapy technique involves replacing the faulty energy-producing mitochondria in a mother's egg with healthy mitochondria from the egg of a second woman who does not carry the disease. The aim is to prevent the transmission of diseases caused by mutations in mitochondrial DNA. But concerns about the safety of mitochondrial replacement, and the psychological and social implications of children with three genetic parents, have given US regulators pause. And a federal law approved late last year prevents the FDA from allowing any such trials in humans.

In its report, the academy panel suggests limiting the tests of mitochondrial replacement to male embryos as a safety precaution. Male offspring would not be able to pass their modified mitochondria to future generations, because a child inherits its mitochondria from its mother.

The report also outlines several extra steps to monitor the safety of mitochondrial replacement. These include making every attempt to follow the children born as a result of the technique for years and sharing the resulting data with scientists and the public.

If mitochondrial replacement is proven safe in male offspring, it could be expanded to female embryos, the advisory panel said.

The approach stands in contrast to that of the United Kingdom, which last year approved mitochondrial replacement with no restrictions on the sex of a modified embryo. Some ethicists who advised the UK government on the implications of mitochondrial replacement argued that the risks of the technique are poorly understood, so there is no justification for using one sex to quantify those risks.

For Shoukhrat Mitalipov, a reproductive-biology specialist at the Oregon Health and Science University in Portland, the advisory panel’s recommendation is a hollow victory. The FDA commissioned the US$1.1 million academy review in 2014 after Mitalipov applied to perform a clinical trial of mitochondrial replacement therapy with human embryos. But the fiscal year 2016 government spending bill enacted in December includes language preventing the FDA from approving any applications to implant modified human embryos into women.

The FDA says that it cannot comment on any individual application, but confirms that the law covers mitochondrial transfer, even if the resulting genetic modifications cannot be passed to a third generation.

“The future seems very hazy compared to a few months ago,” Mitalipov says, given the restrictions included in the spending bill. Still, his lab is beginning to breed monkeys treated with mitochondrial replacement, with the hope of understanding how this genetic modification could affect subsequent generations of offspring.

In an unusual move, the 2016 spending legislation also directs the FDA to appoint an independent committee — including experts from “faith-based institutions” — to review the academy report and report back to Congress. The FDA says that it is reviewing the report and cannot comment on its future plans.

Jeffrey Kahn, a bioethicist at Johns Hopkins University in Baltimore, Maryland, who led the academy panel, notes that it included a religious expert. As for the resulting report, he says, ”I feel like it's had a fairly rigorous review for all issues.”

Others disagree with the panel’s conclusions. The new report “realized all the concerns and leapt to the conclusion that things should go forward despite all the concerns,” says Marcy Darnovsky, executive director of the non-profit Center for Genetics and Society in Berkeley, California, who has opposed mitochondrial replacement in humans on both safety and ethical grounds.

Darnovsky says that she would like to see an international agreement and legislation to ban techniques that edit embryos’ nuclear genomes. “I would have more faith in the argument if allowing this technology isn’t going to pave the way for more concerning forms of germline editing,” she says.