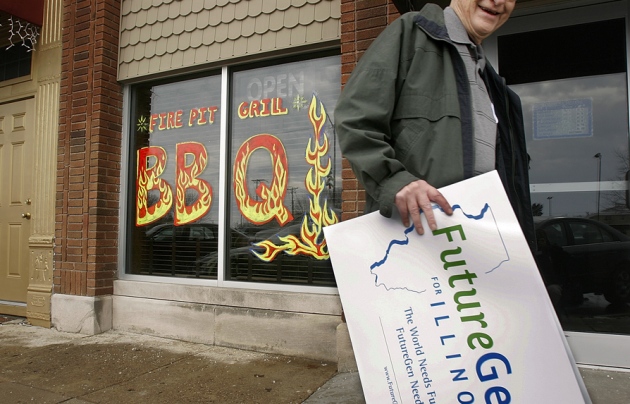 The FutureGen project had a US$1-billion investment from the US Department of Energy.

The US Department of Energy (DOE) has pulled out of the FutureGen project — for a second time, the effort's organizers said on 3 February. Unveiled in 2003, FutureGen was supposed to be the first commercial-scale power plant in the United States to capture and sequester its carbon dioxide emissions.

With project costs rising, then-president George W. Bush abandoned the effort in 2008; two years later, his successor, Barack Obama, created FutureGen 2.0. The revised project would have retrofitted a coal-fired power plant in Meredosia, Illinois, to capture CO2 and pipe the gas into a saline aquifer more than 1,200 metres below ground. Now the DOE says that it is pulling out once again, owing to ongoing questions about private investment in the US$1.7-billion project. Nature examines the decision and its significance for the field of carbon capture and sequestration (CCS).

Why did the DOE pull out of the project?

The US government had invested $1 billion in FutureGen; this came from an economic-stimulus law passed in 2009, which specifies that the money must be spent by September 2015. Legal challenges by groups including the Sierra Club, an environmental organization based in San Francisco, California, have delayed the process of getting permits for the project, which is overseen by the FutureGen Alliance, a consortium of energy and mining companies. The DOE says that it does not believe there is enough time to complete the project before the September 2015 deadline.

What happens to FutureGen now?

FutureGen officials say that they are not giving up just yet, but it will be difficult to reverse course at this point. And without the $1 billion in federal funding, private investors are likely to walk away as well.

What does FutureGen’s demise mean for CCS?

As originally planned, FutureGen was to be the United States’ flagship demonstration of a technology that many hoped would help to provide climate-friendly power on a large scale. But the field of CCS is littered with abandoned demonstration projects, and FutureGen may be remembered as merely one more along the way.

Although FutureGen remained one of the largest projects in the world before the DOE pulled the plug, it was not the most advanced CCS effort. Most notably, the Boundary Dam Power Station in Saskatchewan, Canada, is already capturing and sequestering CO2 from one of its plants, and the electric utility firm Southern Company of Atlanta, Georgia, is currently building a new power station in Kemper County, Mississippi, that will also sequester CO2 emissions.

Why were these similar projects able to move forward?

The projects in Saskatchewan and Mississippi both rely on selling their CO2 to oil companies, which pump the gas into old fields to increase the amount of oil they can produce. Such ‘enhanced oil recovery’ projects have an economic advantage over projects such as FutureGen, in which the CO2 is merely pumped underground as a pollutant.

What is holding back the CCS industry today?

The biggest factor in the United States and around the globe is the lack of significant long-term policies that put some kind of price on CO2 emissions. Capturing and sequestering CO2 costs money. As long as companies are allowed to vent the gas into the atmosphere, it will remain cheaper to do so.

In recent years, relatively cheap natural gas has encouraged energy companies to simply abandon coal altogether. And now that the price of oil has fallen, it will be harder for them to sell captured CO2 to oil companies.

The upshot is that the pipeline for new CCS projects is drying up, says Howard Herzog, a CCS researcher at the Massachusetts Institute of Technology in Cambridge. “FutureGen is a footnote for me — it would have been nice, but the writing is on the wall,” he says. “These other factors are more important than whether FutureGen got built or not.”