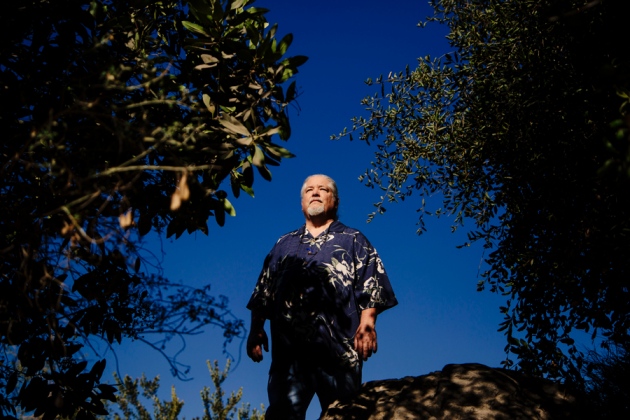 Mark Armitage was fired from his job as a lab technician at California State University, Northridge.

In May 2012, Mark Armitage made a discovery that he had dreamed of for years. While digging in Montana, he uncovered one of the largest triceratops horns ever found in the Hell Creek Formation, a legendary stack of fossil-bearing rocks that date to the last days of the dinosaurs. Armitage drove the horn back home to Los Angeles, California, where his microscopic examination revealed that it contained not only fossilized bone but also preserved layers of soft tissue. “They were brown, stretchy sheets. I was shocked to see anything that was that pliable,” he says.

In February 2013, he published his findings in Acta Histochemica, a journal of cell and tissue research (M. H. Armitage and K. L. Anderson Acta Histochem. 115, 603–608; 2013). Two weeks later, he was fired from his job at California State University, Northridge (CSUN), where he managed the biology department’s electron and confocal microscopy suite.

Now he is embroiled in a long-shot legal fight to get his job back. In July, his lawyers filed a wrongful-termination suit claiming that religious intolerance motivated the dismissal: as a young-Earth creationist, Armitage says that finding soft tissue in the fossil supports his belief that such specimens date to the time of the biblical flood, which he puts at about 4,000 years ago.

The suit alleges that faculty members hostile to Armitage had him fired because they could not stand working with a creationist who had been published in a legitimate scientific journal. He and his attorneys at the Pacific Justice Institute, a conservative legal organization based in Sacramento, California, that focuses on religious and family issues, have repeatedly made that claim in the press. But specialists in US labour law suggest that his claim of religious intolerance might have difficulty standing up if the case goes to trial.

In recent years, a schoolteacher, academic and NASA employee who were creationists have claimed that they were fired unjustly for their religious beliefs. (None were reinstated.) But what makes this case different is that Armitage managed to survive for years in a mainstream academic institution and to publish research in a respected peer-reviewed journal.

Armitage acknowledges that he did that by keeping his views on the age of the fossil out of the paper. Written with biologist Kevin Lee Anderson of Arkansas State University-Beebe, the study simply reported that the horn was found in Hell Creek (which has a well-accepted age of 65 million to 70 million years). “It was just morphology,” says Mary Schweitzer, a palaeontologist at North Carolina State University at Raleigh who reviewed the work before publication, and made the first discovery of soft tissue in dinosaur bones in 2005. “It was fine.”

Creationists often appeal to soft-tissue preservation as evidence that dinosaur fossils are thousands rather than millions of years old, says palaeontologist Jack Horner of the Museum of the Rockies in Bozeman, Montana. “Science is about building hypotheses and then attempting to falsify them,” he says. “Creation science or any kind of pseudoscience is just the opposite. It is coming up with an idea or a notion or anything else and finding evidence to support it.”

According to his lawsuit, Armitage never tried to conceal his beliefs from his employer. The filing says that when he was interviewed for his job at CSUN in November 2009, he did not hide that he holds degrees from the Christian-fundamentalist Liberty University in Lynchburg, Virginia, and the Institute for Creation Research, previously in San Diego, California. In an interview with Nature, Armitage said that he was also equally open about his roughly 30 technical articles on microscopy and his 2008 self-published book Jesus is like my Scanning Electron Microscope.

The lawsuit also claims that Armitage excelled in his job, receiving numerous letters of commendation. “I’m not a microscopist but as far as I could tell, Armitage was a good one,” Paul Wilson, a biologist at CSUN, told Nature.

CSUN declined to comment on Armitage’s performance or its reasons for ending his employment. However, Jeffrey Noblitt, associate vice-president of marketing and communications at CSUN, did stress in an email that Armitage’s position had been “temporary”.

Armitage freely admits that he often engaged students in conversations, giving his opinion on issues such as the age of the remarkably well-preserved cells in the triceratops horn. “To me, the obvious conclusion is they’re young. They can’t be 68 million years old,” he says.

In terms of getting his job back, those conversations might be Armitage’s undoing. US anti-discrimination laws require employers to reasonably accommodate an employee’s beliefs or religious practices, unless doing so would cause ‘undue hardship’ to the employer, says Justine Lisser, a spokesperson for the US Equal Employment Opportunity Commission.

If Armitage made his living bending metal in a machine shop, an employer would find it difficult to show how his views caused undue hardship, she says. But in an academic setting, telling biology or palaeontology students that life began only a few thousand years ago more clearly undermines the institution’s goals. “It would be an easier showing of undue hardship,” says Lisser, “because it’s more related to the essence of what the person is doing.”