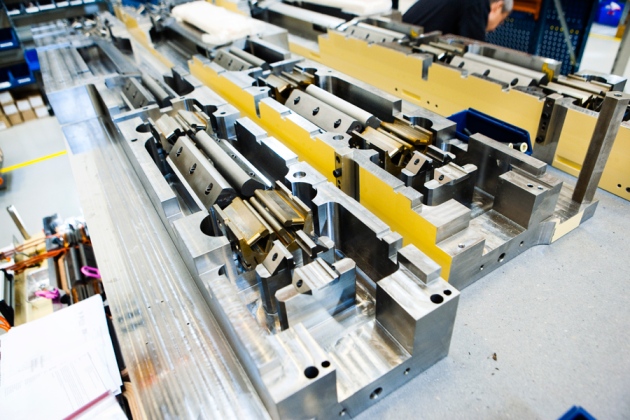 Every day, in dozens of synchrotrons around the globe, electrons are whip­ped around in circular storage rings to provoke them into emitting X-rays, useful for imaging materials, identifying chemical-reaction products and determining crystal structures.

But photon scientists do not want just any old storage ring. For more than a decade, they have dreamt of ‘ultimate’ storage rings — ones that use specialized magnets to produce X-ray beams that are as tightly focused as theory allows.

Now, researchers at the largest US synchrotron, the Advanced Photon Source (APS) at the Argonne National Laboratory in Illinois, are taking steps to develop this technology. In the process, they hope to leapfrog several inter­national facilities that have a head start.

In Sweden, ultimate-storage-ring technology is being pioneered at MAX IV, a 528-metre-circumference synchrotron in Lund. Scientists there first sought to increase the intensity and brightness of the synchrotron’s X-ray light in 2006 by focusing electron beams more tightly. The design relied on groups of seven magnets, known as multi-bend achromats, that could be used in as many as 20 places around the ring to nudge the paths of electrons back and forth until they lined up more-or-less perfectly. Machine director Mikael Eriksson recalls that when he toured US light sources to describe the project, “few believed it”.

Eriksson now has believers. In a report posted online on 29 August, researchers at the Argonne lab describe how they are hoping to upgrade the 1.1-kilometre-circumference APS with multi-bend achromats (see go.nature.com/asxrqb). “There’s a new technology that has come along and it’s pretty revolutionary,” says APS director Brian Stephenson. Current storage rings have at most double-bend achromats, which contain two magnets rather than seven. Physicists had thought that including more magnets would make the beam unstable by bending it too much and introducing too many fluctuations. But the work at MAX IV showed that very compact magnets enable bending paths that are short enough to stop fluctuations from building up.

The US Department of Energy, which funds the APS, still needs to approve the plan. In July, one of the department’s advisory committees suggested that US labs were being left behind while other countries push towards ultimate storage rings. The committee had also recommended pursuing a next-generation X-ray laser, useful for making ‘molecular movies’ of chemical reactions, among other things (see Nature 500, 13–14; 2013). But such a laser would have limitations: its strongly peaked light pulses would destroy delicate materials. Ultimate storage rings, by contrast, satisfy a need for more gradually peaked pulses of light. 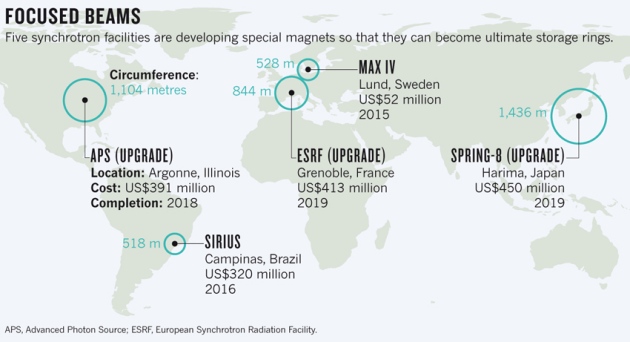 Researchers say that these storage rings could revolutionize X-ray imaging by making it possible to map evolving chemical processes. Current X-ray sources are not bright enough to track changes in materials with nanometre and nanosecond resolution, because there are not enough coordinated photons in the beams. Ultimate storage rings would change that. “A whole class of new problems opens up,” says Paul Evans, a materials scientist at the University of Wisconsin–Madison. For example, he says that the rings could be used to investigate what happens chemically and electrically at the interface between materials inside a battery as it runs out.

The APS is seeking to tack the installation of ultimate-storage-ring technology on to a separate upgrade that had already been approved. Cost calculations are still ongoing, but Stephenson hopes that the multi-bend achromats can be included without raising the upgrade budget much above US$391 million. MAX IV is implementing the technology for only 340 million Swedish kronor ($52 million), but that ring is smaller and the price tag would not include the overhead costs that are charged at US energy-department labs.

After its upgrade, the APS could surpass MAX IV by approaching the theoretical limit for the most focused beam possible. The Swedish synchrotron will contain 20 multi-bend achromats, whereas the APS upgrade calls for around 40. In 2012, physicists at SLAC National Accelerator Laboratory in Menlo Park, California, showed that the number of multi-bend achromats around a larger ring could be pushed even higher without fundamentally destabilizing the electron beam. “The key is to make the bending gentle,” says Yunhai Cai, head of beam physics at SLAC.

Alongside APS, the European Synchrotron Radiation Facility (ESRF) in Grenoble, France, has also opted for a multi-bend-achromat upgrade, after a working group concluded last October that the technology was affordable. ESRF director-general Francesco Sette says that accelerator physicists there showed that multi-bend achromats could work with the facility’s existing injector, a part of the machine that supplies extra electrons to the main ring a few times each day. He had previously thought that a new injector would be needed. “We are today in full swing to launch as soon as possible,” he says.

Storage rings in Brazil and Japan will also be upgraded with multi-bend achromats, giving MAX IV a window of only one year from its projected completion date of 2015 before it faces competition (see ‘Focused beams’).

Some have suggested that particle-physics tunnels, too, could eventually be turned into light sources with multi-bend achromats. SLAC has an idle 2.2-kilometre-circumference tunnel that originally housed a particle accelerator used to compare the decay rates of matter and antimatter. And a 6.3-kilometre tunnel used by the now-closed Tevatron particle accelerator at Fermilab near Batavia, Illinois, is another candidate for conversion. Eriksson says that building ultimate storage rings of that size would not be realistic for Sweden, given the relative size of its science budget.

He knows that Sweden’s time in the vanguard will be short-lived, and has mixed feelings about seeing other countries adopting the technology that he and his colleagues pioneered so enthusiastically. “We are both happy and a little sorry,” he says.