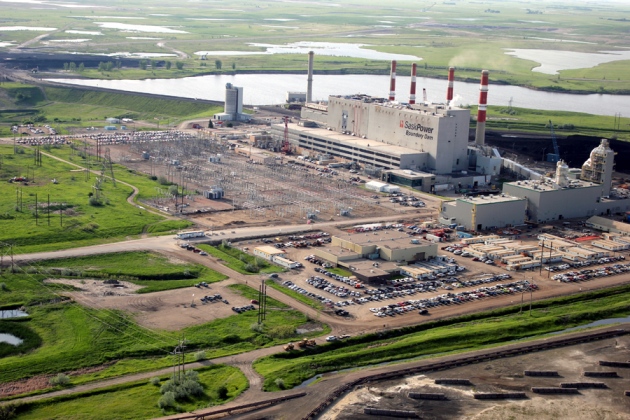 The Boundary Dam Power Station in Saskatchewan, Canada, hopes to be the first commercial coal-fired power plant to capture some of its carbon dioxide emissions.

When Unit 3 at the Boundary Dam Power Station in Saskatchewan, Canada, switches on later this year after a lengthy refit, it will mark a historic moment for dirty coal power. It will be the first time that a commercial-scale plant supplying electricity to the grid captures and stores a large fraction of its carbon dioxide emissions.

“We’re getting interest from all around the world,” says Robert Watson, chief executive of provincial-government-owned plant operator SaskPower Corporation in Regina. The firm plans to sell about 1 million tonnes of CO2 a year — up to 90% of Unit 3’s emissions — to oil company Cenovus Energy of Calgary, Canada, which will pipe the compressed gas deep underground to flush out stubborn oil reserves.

The project — meant to launch in April but pushed back by renovation delays — looks set to start just ahead of a larger, newly built advanced coal plant in Kemper County, Mississippi, run by Mississippi Power, a subsidiary of Southern Company in Atlanta, Georgia. That plant, which will turn the low-grade coal lignite into burnable gases, is designed to capture 3.5 million tonnes of CO2 each year, or about two-thirds of what it will produce. Like Boundary Dam, it will sell the gas for oil recovery. 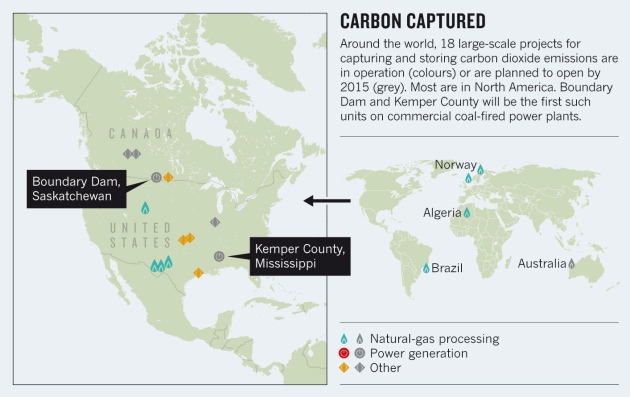 Concerns about the costs of carbon capture and storage (CCS) persist. The technology has progressed extremely slowly, reflecting a lack of enthusiasm for financing large projects. Yet the International Energy Agency (IEA) in Paris says that without CCS it could cost 40% more to decarbonize electricity enough to meet international climate targets by 2050. But the two projects are giving CCS supporters something to cheer about. “This year is really important for CCS,” says Stuart Haszeldine, a geologist at the University of Edinburgh, UK.

The concept is hardly science fiction: the oil industry has been piping CO2 underground to aid in oil recovery for almost half a century. It already purchases some supplies from industrial projects that routinely separate out the gas during procedures such as processing natural gas or making fertilizer (see ‘Carbon captured’). And small-scale CCS pilots have shown how solvents can capture CO2 from power-plant turbines. “The technology is ready to go,” says Howard Herzog, a CCS researcher at the Massachusetts Institute of Technology in Cambridge. “The problem is that policies aren’t in place to make projects economic.”

The extra equipment and energy needed to separate and store CO2 mean that neither of the pioneering power projects comes cheap. Both have relied on a combination of government subsidies, electricity price hikes and particular local circumstances to get going as other attempts have fallen by the wayside. The Kemper County project is costing US$5.2 billion, and Mississippi Power expects to increase local electricity prices by 24% to claim back about half its costs. The Boundary Dam refit will cost Can$1.3 billion (US$1.2 billion), and SaskPower — the sole electricity supplier in the province — hopes for a 15.5% price increase over the next three years. SaskPower decided to retrofit its plant in part to satisfy  Canadian regulations that will cap emissions from new and old units from 2015.

Boundary Dam will also aid research, by separating off a side-stream of CO2 for an experiment called Aquistore. This project will inject up to 300,000 tonnes of gas per year, depending on Cenovus’s operations, into a 3.5-kilometre-deep saline aquifer (a thin layer of brine-soaked porous rock) for storage. Unlike the oil firm, Aquistore will closely monitor what happens to the gas.

In the bigger picture, CCS progress remains stagnant. Coal-burning alone belched out 15 billion tonnes of CO2 worldwide in 2012, 43% of total CO2 emissions; thousands of CCS projects would be needed by 2050 to reach targets to put a serious dent in emissions. In 2009, the IEA published a road map calling for 100 large CCS projects by 2020, but last July, with projects failing to materialize, it downgraded that to just 30. Experts say that is still ambitious. The problem is that large emitters such as power stations and steel or cement works have no economic incentive to capture and bury their waste gases. “The slow progress with CCS reflects very closely the level of global climate-policy ambitions,” says Juho Lipponen, head of the IEA’s CCS unit. For example, there is no appetite for taxing carbon emissions.

Some argue that there is no point in putting high prices on carbon or setting stringent emissions standards while CCS technology is uncertain, expensive and yet to be proven on a large scale. But CCS experts retort that capture technology will get cheaper rapidly as engineering experience accrues, and that it will be possible to store the gas, given the right geological settings.

The two coal-CCS plants, however costly, are globally significant because they could help to end this vicious cycle, says Vivian Scott, who studies CCS policy at the University of Edinburgh. If they are successful, they could demonstrate that CCS can be delivered at commercial scales, he says, and “break the catch-22”.