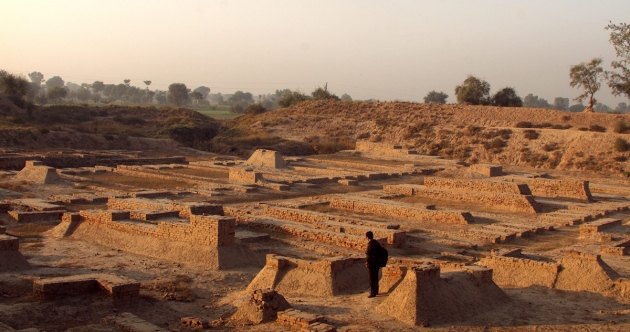 The ruins of the ancient city of Harappa, now in Pakistan, one of the major centres of a civilization that disappeared probably because of climatic upheaval.

The decline of Bronze-Age civilizations in Egypt, Greece and Mesopotamia has been attributed to a long-term drought that began around 2000 bc. Now palaeoclimatologists propose that a similar fate was followed by the enigmatic Indus Valley Civilization, at about the same time. Based on isotope data from the sediment of an ancient lake, the researchers suggest that the monsoon cycle, which is vital to the livelihood of all of South Asia, essentially stopped there for as long as two centuries.

The Indus Valley, in present Pakistan and northwest India, was home to a civilization also known as the Harappan Civilization. It was characterized by large, well-planned cities with advanced municipal sanitation systems and a script that has never been deciphered. But the Harappans seemed to slowly lose their urban cohesion, and their cities were gradually abandoned.

The link between this gradual decline and climate has been tenuous because of a dearth of climate records from the region. So Yama Dixit, a palaeoclimatologist at the University of Cambridge, UK, and her colleagues examined sediments from Kotla Dahar, an ancient lake near the northeastern edge of the Indus Valley area in Haryana, India, that still seasonally floods.

The team assigned ages to sediment layers using radiocarbon dating of organic matter. In various layers, they collected the preserved shells of tiny lake snails (Melanoides tuberculata), which are made of a form of calcium carbonate (CaCO3) called aragonite. The team also looked at the oxygen in the argonite molecules, counting the ratio of the rare oxygen-18 isotope to the more prevalent oxygen-16.

Kotla Dahar is a closed basin, filled only by rain and runoff and without outlets. Thus precipitation and evaporation alone determine its water volume. During drought, oxygen-16, which is lighter than oxygen-18, evaporates faster, so that the remaining water in the lake and, consequently, the snails' shells, become enriched with oxygen-18. The team's reconstruction showed a spike in the relative amount of oxygen-18 between 4,200 and 4,000 years ago. This suggests that precipitation dramatically decreased during that time. Moreover, their data suggests that the regular summer monsoons stopped for some 200 years.

The result, reported last week in Geology1, supports the idea that monsoon failure led to the civilization’s decline, although David Hodell, a co-author of the study and a palaeoclimatologist also at the University of Cambridge, hastens to add that uncertainties in the shell and archaeological records mean that the dates could be off by some 100 years in either direction.

Anil Gupta, the director of the Wadia Institute of Himalayan Geology in Dehradun, India, says that the work fills a gap in the geographic record of ancient droughts. But large questions remain. “What drove this climate change 4,100 years ago? We don’t see major changes in the North Atlantic or in the solar activity at that time.”

Recently, another team, led by palaeoclimatologist Sushma Prasad of the German Research Centre for Geoscience in Potsdam, Germany, did a similar analysis on a sediment core from Lonar Lake in central India2. They found that in that area, drought began as many as 4,600 years ago. But the results are consistent with those of Dixit’s group, Prasad says. “We see a drying event starting earlier, but at about 4,200 years ago it became very intense.”

If a lack of monsoons did spell the end of the Indus Valley civilization, says Hodell, “it is an example — and there are other examples of this — of how ancient societies have had to contend with climate. There are some lessons for us and our future, in which we will have to deal with anthropogenic climate change”.