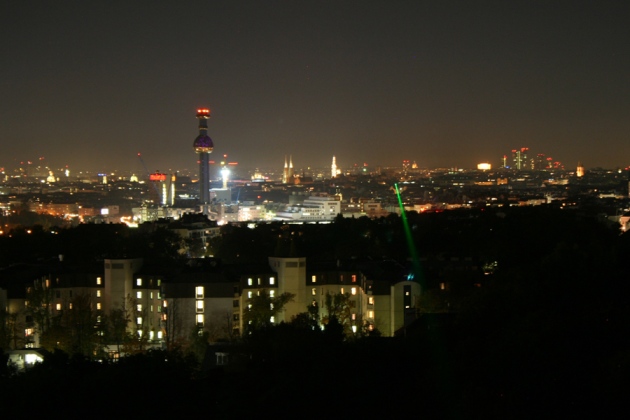 Beams of light carved into a corkscrew shape have carried data more than 3 kilometres over Vienna’s skyline, in an effort to increase the information-carrying capacity of electromagnetic waves. The results defy theoretical predictions that atmospheric turbulence would destroy the data.

Physicists and engineers have developed an array of tricks to increase the amount of data that can be crammed into optical or radio waves: chopping a broad wavelength band into several narrower channels, for example, or sending distinct data streams along circularly polarized waves that rotate either clockwise or anticlockwise.

But 'twisted light' potentially offers a much greater capacity boost. Light waves can carry orbital angular momentum (OAM) — when the fluctuations of the light's electromagnetic waves are staggered along different parallel light rays. This is analogous to a row of soldiers marching in lockstep but moving their arms at different times.

Adding orbital angular momentum to a laser beam can produce a theoretically infinite range of corkscrew patterns, known as modes (see video below).

Crucially, different OAM modes can travel long distances without interfering with each other, even if they are carried in overlapping light beams with identical wavelengths. “You can multiply the data rate by the number of modes you have,” says physicist Mario Krenn, a member of Anton Zeilinger's team at the University of Vienna that reports the twisted-light experiment in the New Journal of Physics1. 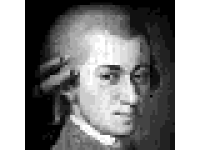 Mozart's portrait as trasmitted over Vienna.

The team used green laser light with 16 different OAM modes to send data from the top of a radar tower to a small detector across the city, successfully transmitting small black-and-white pictures of Wolfgang-Amadeus Mozart and the physicists Ludwig Boltzmann and Erwin Schrödinger — all of them Austrians.

Each OAM mode was assigned to a different shade of grey, from black to white. A quick burst of one mode indicated a dark-grey pixel; a different mode signalled that the next pixel was white; and so on. Pattern-recognition software helped to identify each mode as it arrived, achieving an error rate of just 1.7%. The modes switched four times per second, and the images built up pixel by pixel.

As data-transmission rates go, it is not much better than a human beeping in Morse code. But the experiment showed that OAM modes can survive for much longer trips through the atmosphere than expected, and raises hopes that the same success would be seen if the modes were used as separate, simultaneous channels.

“It’s impressive,” says Alan Willner, an electrical engineer at the University of Southern California in Los Angeles, who last year used light with four distinct OAM modes to transmit 400 gigabits per second through 1.1 kilometres of special fibre-optic cable (see 'Corkscrew' light could turbocharge the Internet’). “It gives us confidence that signal processing has a lot of potential for mitigating the effects of turbulence.”

Other researchers have applied the technique to making radio communications more robust, using three different OAM modes as separate channels to carry data over about 450 metres (see ‘Adding a twist to radio technology’). But those efforts have been criticized by some electrical engineers, who argue that over greater distances the waves will spread out too much, making the OAM modes impossible to detect reliably without using impracticably vast receivers.

Visible laser light should not suffer so much from this spreading, potentially allowing OAM modes to travel for dozens of kilometres or more. Zeilinger’s team notes that the amount of atmosphere between the ground and space is roughly equivalent to about 6 kilometres of sea-level atmosphere, suggesting that OAM modes might make it all the way to space without being mixed up in transit.

In this video the Vienna researchers explain their twisted light experiment.