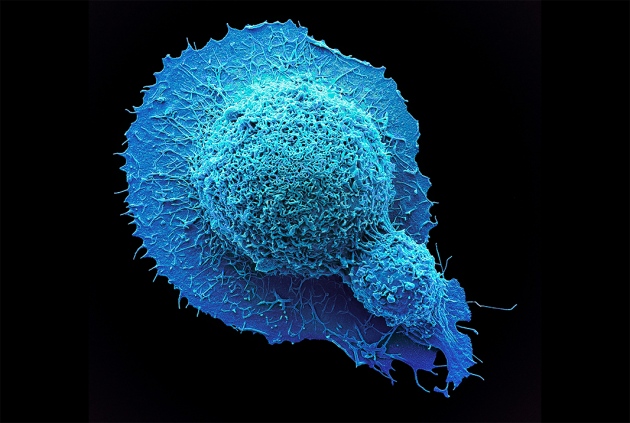 Colorectal-cancer cells may have met their match in a treatment just approved by US regulators.

The US Food and Drug Administration (FDA) has issued its first approval of a cancer drug that targets tumours with specific mutations, regardless of where in the body the tumour first took root.

This deviates from the agency’s previous approach: although a drug’s use may have been linked to the presence of a particular molecular marker, the FDA still required individual approvals to deploy that drug based on the tumour's location.

The announcement on 23 May expands the use of pembrolizumab, manufactured by pharmaceutical giant Merck & Co. of Kenilworth, New Jersey. The drug boosts the body’s ability to attack tumours by blocking a protein called PD-1, which normally holds the immune system in check. The FDA had previously approved pembrolizumab for use in several cancers, including lung and skin cancer. But physicians can now use it in any solid tumour that has a particular defect in its ability to repair damaged DNA.

Researchers have been anticipating such marker-based approvals for roughly a decade, as the rise of molecular profiling — characterizing a tumour based on the genes and proteins that it expresses — has promised a shift in cancer treatment. Similar approvals may be on the horizon as companies begin to structure more of their clinical trials to gather data on a drug’s effects across multiple tumour locations.

“It’s exciting,” says cancer biologist Trever Bivona of the University of California, San Francisco. “It’ll signal a very clear shift in the way the whole ecosystem operates: the FDA, the companies and the oncologists.”

Yet achieving this milestone has been more difficult than many cancer researchers initially expected. Despite early enthusiasm for the approach, researchers have come to respect the influence of a tumour’s location on its response to treatment, says cancer researcher René Bernards of the Netherlands Cancer Institute in Amsterdam. “It was a case of irrational exuberance,” he says. “When push comes to shove, the clinical responses were not that impressive.”

Bernards speaks from experience. In 2010, researchers reported a successful trial of a drug called vemurafenib, which targets a mutated form of the protein B-RAF1. Subsequent studies found that the drug worked in 48% of melanomas with that mutation2. The results came as cancer genome sequencing efforts were gathering steam, building massive catalogues of mutations found across different cancers. The vemurafenib success fuelled hopes that the drug would work in other cancers with the same B-RAF mutation.

But in colon cancers with those mutations, the data were dismal: only about 5% of patients responded to the drug3.

The episode has since become the poster child for the importance of location, Bernards says. His team studied cancer cells grown in culture, and found an additional pathway — active in colon-cancer cells but not in most skin-cancer cells — that could allow colon cancers to escape the effects of vemurafenib4. “Context does seem to matter,” he says. “Big time.”

But the success of pembrolizumab shows that a marker-based approach can still work in some cases. In 2015, researchers reported that about 71% of trial participants whose tumours had a defect in their ability to repair damaged DNA benefited from pembrolizumab treatment, regardless of where those tumours were located5. The flaw disables a pathway that repairs mistakes made by the enzymes that copy DNA during cell division. Those mistakes create mutated proteins that can signal to the immune system that something is amiss, says James Eshleman, a pathologist at Johns Hopkins University School of Medicine in Baltimore, Maryland.

Still, the landmark approval opens doors to other companies betting on this approach. Investigators at Loxo Oncology in Stamford, Connecticut, are betting that their drug larotrectinib will also be able to override location-specific cues. Larotrectinib targets TRK-fusion proteins, which are created when two genes fuse together. The resulting proteins spur tumour growth, and Loxo has been testing its drug in any tumour with the fusions. The company will report data from its trials on 3 June at the annual meeting of the American Society of Clinical Oncology in Chicago, Illinois.

It is unusual for companies to launch such ‘tissue-agnostic’ trials, says Bivona. But he expects the FDA approval to encourage more companies to try that route — particularly when researchers are targeting a rare molecular marker. Enrolling participants with the same marker across different tumour types will help boost the size of trials, he notes. “You can get a quicker readout on the effectiveness of the drug,” says Bivona. “Practically speaking, I would say this is the most important upside of this approach.”