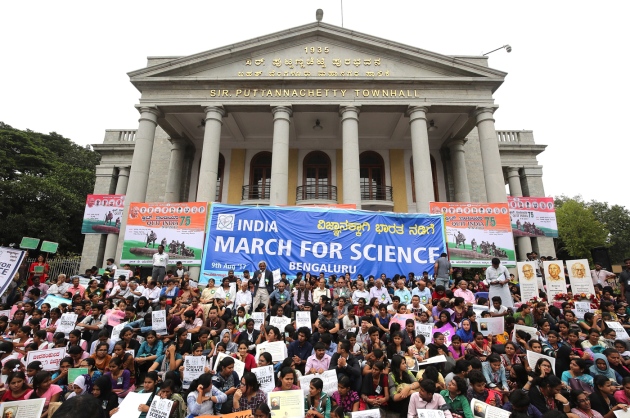 Students and researchers march in support of science in Bangalore, India.

Thousands of scientists, university students and science enthusiasts gathered in dozens of Indian cities to march in support of science on 9 August — lamenting their country’s low levels of funding for research, and complaining about government promotion of ‘unscientific ideas’.

But several scientists Nature spoke to said they stayed away from the event, either because they had been directly asked not to attend, or because they feared repercussions from higher authorities if they did. They included some researchers at the Institute of Genomics and Integrative Biology (IGIB) in Delhi, who said they had been sent an email on 8 August directing them not to take part in the march, without specifying a reason. Other researchers, who did not want to be identified, said they had been asked not to engage in anti-government activity.

The Indian demonstrations come 4 months after the global March for Science on 22 April, which saw people gather in at least 600 cities around the world in support of scientific research and evidence-based policymaking. On that day, only two Indian cities, Hyderabad and Coimbatore, took part. “We felt that the global march was more to do with the [US President Donald] Trump administration’s anti-science perspective, and not related to Indian science problems,” says Satyajit Rath, an immunologist at the Agharkar Research Institute in Pune who attended a march in his city. “In retrospect, we should have participated more keenly in the global march,” he says.

At 11 a.m., protestors in Bangalore, a southern city that is one of India’s key science hubs, were among the first to set off; more than 1,000 people were there, according to the Breakthrough Science Society, the advocacy group that coordinated Wednesday's events across India. The society, which is headquartered in Kolkata, says that in total, some 40 cities saw marches.

In Delhi, India's capital, the march was a tamer affair. Some 200 people took to the streets, carrying placards with messages such as “Defend science, not defund science” and “Stop killing science for your personal and political agenda”. Asked why IGIB scientists had been told not to attend the Delhi event, the institute's director, Sanjay Kumar, said that it was a safety measure. "Scientists' safety is our responsibility. How can one predict what can happen if the large gathering turns into a mob," he said.

The March for Science events focused attention on India's stagnant investment in research and development. Despite promises from successive governments to increase investment to 2% of gross domestic product (GDP), the proportion invested hasn’t changed significantly from around 0.9% for the past decade. March organizers say the government should invest 3% of GDP in research.

Scientists who did not march also share concerns over the allocation of resources to research. “It’s a very difficult time for research in India,” says Satyajit Mayor, director of the National Centre for Biological Sciences in Bangalore. “There is no real focus on expanding the research base in the country.” 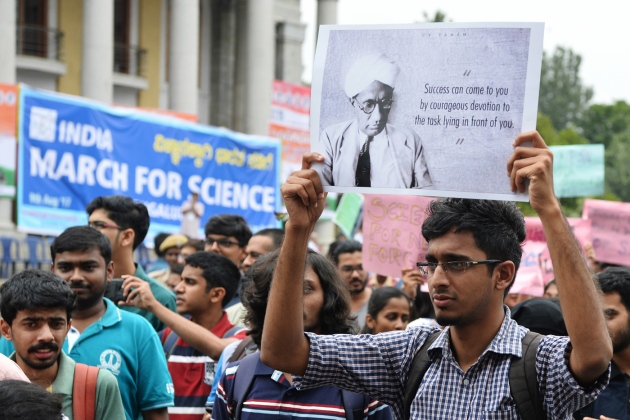 Protestors in Bangalore called for an increase in research funding.

But Ashutosh Sharma, secretary of India’s Department of Science and Technology (DST), disagrees in part with the protesters’ complaints. Funding for India's ministry of science and technology (which allocates cash to the DST among other science agencies) has risen by double-digit percentages annually since 2014–15, he points out — outstripping the country's economic growth — while the DST's funds for basic and applied science have almost doubled in the past five years.

The marchers also protested against the government’s support for what they call unscientific ideas. Rath cites a government push for research institutions to investigate the health benefits of cow products such as milk and urine, apparently motivated in part by religious groups' veneration of the cow as a sacred animal. “It is incumbent upon the representatives of the government to acknowledge that scientific knowledge is based on free and open enquiry,” Rath says. “Research should not be used for validation of prejudices and ideology.”

Details of scientists who were asked not to attend the march have been added.