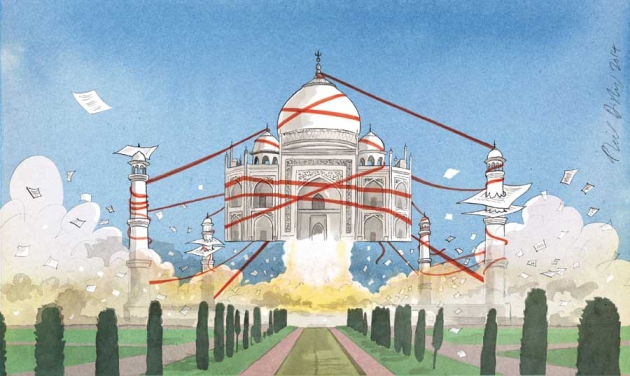 India's general elections this month and next could be among the most important since it gained independence in 1947. After ten years of a largely indecisive and an often scandal-ridden coalition government, there are strident demands for better governance, economic reform, the promotion of manufacturing and improvements in agriculture, health care and environmental management.

Sadly, science and its administration, once seen as central to Indian development, are not currently on the agenda, despite some trenchant critiques from scientists and science policy-makers1, 2. Repeated government promises to increase the expenditure on research and development (R&D) to 2% of India's gross domestic product have not been kept. R&D spend remains at about 0.9% of GDP — compared with 1.12% in Russia3 (down from 1.25% in 2009), 1.25% in Brazil and 1.84% in China2 (see 'Brick benchmarking').

That said, the stagnation afflicting Indian science is as much structural as it is financial. Before the machinery of government took over and mismanaged research in the mid-twentieth century, several foundational scientific discoveries were made in India. Between about 1900 and 1930, Jagadish Chandra Bose made innovations in wireless signalling (borrowed by Italian electrical engineer Guglielmo Marconi); Meghnad Saha developed an ionization formula for hot gases that has a central role in stellar astrophysics; Satyendra Nath Bose's theoretical work in quantum statistics led to Bose–Einstein statistics; Chandrasekhara Venkata Raman did Nobel-prizewinning work on light scattering; and in mathematics, Srinivasa Ramanujan was equally pioneering.

But since 1947, there has not been a single Nobel-prizewinning scientific or technological discovery, despite India's successes in space, radio astronomy, biology and pharmaceuticals and the worldwide reputation of its US$100-billion information technology (IT) industry. Three other Indian-born scientists have won a Nobel prize — biochemist Har Gobind Khorana (in 1968), astrophysicist Subrahmanyan Chandrasekhar (in 1983) and molecular biologist Venkatraman Ramakrishnan (in 2009) — but for work done entirely outside India. No mathematician from India has won the Fields Medal. And Indian institutes and universities do not feature in the world's top 200 higher-education institutions (see go.nature.com/bc69uq).

The basic problem is that Indian science has for too long been hamstrung by a bureaucratic mentality that values administrative power over scientific achievement. And, to preserve local control, research is still done mostly by small teams working in isolation rather than through collaboration — a key generator of impact4. 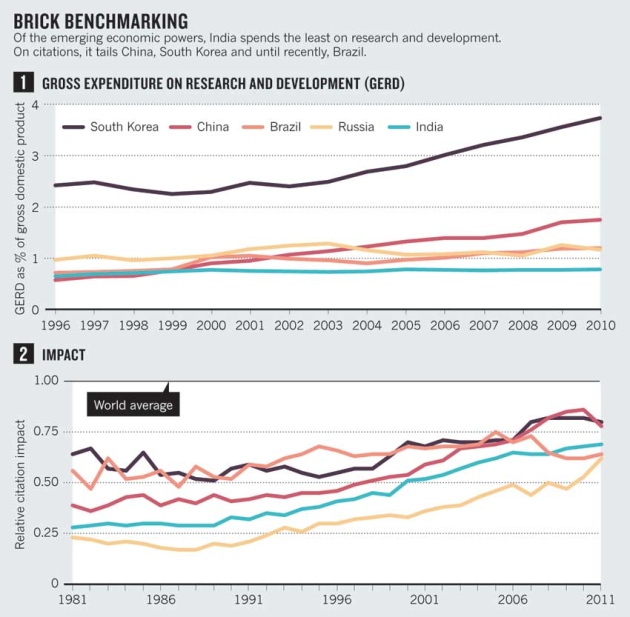 More than two decades ago, the threat of imminent national bankruptcy forced India's government to liberate its economy from the notorious 'licence–permit raj', which had strait-jacketed commerce and industry since 1947. What will it take in 2014 to reinvigorate India's decrepit scientific empires, trapped for decades in a similarly rigid bureaucracy?

The problem has a long history. The Council of Scientific and Industrial Research (CSIR) was formed in 1942, before independence, to establish five national laboratories aimed at converting research discoveries into industrial applications. It was soon widely derided. Raman, referring to the first director-general of the CSIR, chemist Shanti Swarup Bhatnagar, said: “Bhatnagar built the National Laboratories to bury scientific instruments”5. The situation today is no better. A former CSIR director-general, chemical engineer Raghunath Anant Mashelkar, remarked in 2013: “India can't remain a nation of imitators.”

In 1954, India's Department of Atomic Energy (DAE) was created using a different model, later replicated for other scientific departments, such as those for space, science and technology, electronics, biotechnology and ocean development. Its first head, nuclear physicist Homi J. Bhabha, was made a secretary to the government, on a par with top administrators in home affairs, finance and defence. This gave atomic energy official credibility, but placed it in a bureaucracy that was not designed to foster innovation.

Gradually, the DAE's independence was ground down and its scientists and technologists slotted into administrative grades in which they could progress no faster than their non-scientific peers. Research achievement offered few rewards, other than a patriotic pat on the back. The other scientific departments quickly went down the same route. Scientists began to measure success by their administrative position and left research to juniors, who saw what they had to do to move up the hierarchy. If good science was done along the way, it was incidental. Today, although India ranks tenth in the world for output of scientific papers, it ranks 166th for average citations per paper (see go.nature.com/xl3ldg). Almost 20% of patents filed at the World Intellectual Property Organization in 2010 were from China, with just 1.9% from India (below Russia's 2.1% but above Brazil's 1.1%)6.

Nearly 60% of India's science budget2 is now spent on the CSIR, scientific departments and the Defence Research and Development Organisation (DRDO) — an enormous and impenetrable empire set up in 1958. None of these national institutions has stimulated scientific excellence. Indian scientists do outstanding work, but not in India. The latest examples of this long-familiar situation include the award of the 2014 Marconi Prize in the United States to engineer Arogyaswami Joseph Paulraj of Stanford University in California, who worked in the Indian navy and at the Centre for Development of Telematics for some years before emigrating in the early 1990s, and the appointment in February of Indian-born Satya Nadella as chief executive of Microsoft.

The problems at the national level are mirrored in institutions. First, scientists are promoted on the basis of years of service, rather than achievement, and once at the top they stay until retirement age; long after, in some cases. Even at the prestigious Tata Institute of Fundamental Research (TIFR) in Mumbai, which is less rule-bound than many other institutions, research groups are almost invariably headed by those who have been there the longest.

Second, although research in the leading institutions is well funded — with more money available than requested in credible grant applications, a striking contrast to the situation in many nations — the funding is subject to unsuitable restrictions applicable to the entire government bureaucracy. These include limited foreign travel and no travel support for research students, ruling out regular participation in leading conferences and research gatherings.

Third, the movement of researchers from one institution to another is discouraged, because administrators prefer senior positions to be filled by internal promotion rather than lateral hiring.

One would expect respected bodies of scientists to question the government's virtual abandonment of science. But none of India's science academies (such as the Indian National Science Academy and the Indian Academy of Sciences) has taken any action — even on the widely reported cases of plagiarism by their fellows7.

Indian science needs public funding, but not government control. In many countries, the promotion of science is devolved to agencies outside the main government structures, such as the United Kingdom's Engineering and Physical Sciences Research Council, the European Research Council, the US National Science Foundation and Singapore's Agency for Science, Technology and Research.

The first step towards reinvigorating Indian science must be to create an empowered funding agency, staffed by working scientists, some of whom could be non-resident Indians. A possible model is the European Research Council, which deals with a complex of national governments no less formidable than India's 29 state governments, yet manages to focus on supporting research excellence. The crucial requirement is obviously that an Indian scientific research council be permitted to set its own criteria for the evaluation of research proposals, independent of direct government control, and disburse government funds accordingly.

A second step must be to ensure planned rotation of institutional roles and responsibilities. This occurs in most university departments in the Western world — typically, every four or five years for the chair of a UK university department. Governing bodies should limit the tenure of the heads of scientific institutions and groups to, say, five years, after which they would be expected to return to active research. This change would work best by choosing heads young enough to have future research careers. Bhabha was 35 years old when he was appointed director of the TIFR in 1944; his example has not been repeated.

Third, the formation of trans-institutional groups that can undertake coordinated work in a few well-chosen areas should be encouraged at the funding stage. This contrasts with the existing 'national missions' of the government. The $160-million Nano Mission (launched in 2007) has funded more than 150 individual projects, 11 centres of excellence and 6 industry-linked projects — but has required no collaboration between institutions. For building competence and achieving results, it would have been much more effective to encourage collaborative efforts across institutions in, for instance, medical applications, solar and fuel cells, and water purification. Such collaboration has been achieved successfully, for example, in the European Strategic Program on Research in Information Technology, the projects of which span several countries and agencies.

Fourth, how to spend that 2% of GDP when it finally materializes? Leading institutions such as the Indian Institutes of Technology and many others are already well provided for, by any standards8. New research money should be spent on regenerating the scores of poorly provided university laboratories that lack the funds to procure and maintain modern scientific equipment; they currently receive only around 10% of the R&D budget but are expected to produce most of the country's PhDs2.

Indian scientists working in conventional disciplines will be loath to admit it, but there is now a model of technological success in India — in the growth of the IT industry. The creation and export of software to the developed nations grew, even during the licence–permit raj of the 1970s and 80s, because software did not fall into any government category9. Its commercial success was driven primarily by young engineers in their 20s working in a competitive environment unfettered by government regulations.

Ironically, academic computer science in India barely benefited from this boom until recently, when a few enterprising IT companies such as Tata Consultancy Services, Microsoft and Infosys instituted well-planned funding to pay attractive stipends to young computer scientists taking up research careers.

One lesson from India's IT industry is that it is essential to draw the private sector into major research programmes. Industry at present contributes about 30% of India's total spend on R&D2, most of it devoted to improving productivity and reducing cost and energy consumption, rather than product development. It is essentially shut out of basic research because of government rules that prohibit, or severely inhibit, public–private collaboration. Although the massive public-sector defence industry relies mostly on purchasing foreign-made weapons and little on the laboratories of the DRDO, it is still unwilling to partner with Indian companies to grow competence and capability.

Another lesson is that science could attract talented young people if it provided them with a more exciting work environment and a career path that rewards achievement. A scientific career has the potential to be at least as challenging and stimulating as one in IT, even if not as financially rewarding.

The Indian pioneers of the early twentieth century, such as Raman, made their theoretical and experimental breakthroughs with almost no government support; their research suffered from government apathy but not bureaucratic interference. The strong urge for discovery that drove them could return — if there were greater rewards for innovation, fewer for administration and longevity.