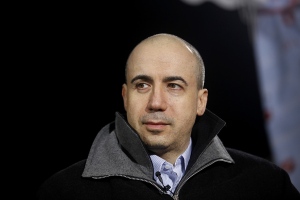 Billionaire investor Yuri Milner has set up a prize for theoretical physics.

A billionaire Internet mogul has awarded a record US$27 million to nine physicists for their work on fundamental theory. Yuri Milner, who has made his fortune investing in social-media companies, announced the newly created Fundamental Physics Prize this morning. The winners work on difficult problems ranging from the Universe's early inflation to string theory (see 'Theoretical millionaires').

At $3 million a head, the new prize dwarfs the Nobel Prize, which this year is valued at around SEK8 million ($1.2 million). It also exceeds other well-known awards such as the Kavli Prize and the Shaw Prize, which are valued at $1 million each.

News of the award came as a shock, even to the winners. "It was a complete surprise," says Edward Witten, a theoretical physicist at the Institute for Advanced Study in Princeton, New Jersey, who won an award for his work on string theory.

At 50 years old, Milner is something of an overnight sensation in California's Silicon Valley. In the past three years, he has invested heavily in social-media companies including Twitter, Facebook and Spotify. Today his various investment funds are worth an estimated $12 billion, and his private worth is set at $1 billion.

He created the prize out of a love of theoretical physics, which he studied at Moscow State University and the Russian Academy of Sciences during the 1980s and early 1990s. The initial prizewinners were chosen by Milner himself. Unlike other awards, such as the Nobel Prize in Physics, the new prize can be given to theorists whose ideas have not yet been supported by data. The goal is to reward groundbreaking concepts that are driving theoretical thinking forward.

"The intention was to say that science is as important as shares trading on Wall Street," Milner told Nature. The money comes with no strings attached, but he hopes that the prize will raise public recognition of theoretical physics and that the award recipients will deliver public lectures that will become as popular as Richard Feynman's famous lectures on physics.

The new awards were not recieved warmly by all in the theoretical community. Some of the winners work on theories, such as string theory, that are basically untestable, says Peter Woit, a mathematician at Columbia University in New York, who is a well-known critic of speculative ideas. And others work on theories, such as supersymmetry and extra dimensions, that are under serious strain as a result of new measurements at the Large Hadron Collider (LHC), a massive particle accelerator located near Geneva, Switzerland (see 'Theorists feast on Higgs data'). "A bunch of people are getting $3 million for doing something that is untestable or has just been shown to be wrong," he says.

Moreover, he says, the prizewinners come from a few elite institutions (four of the nine are from the Institute of Advanced Study). The net effect may be to reinforce the old guard, rather than encouraging new thinking, he warns.

In response, Milner says that he is not yet convinced that the LHC has disproven ideas such as supersymmetry. "I think the LHC has not shown its full potential; I think we should talk about it in the next few years," he says.

As for the panel's composition, he admits that "any nine names I would have chosen would not be a perfect set". Future prizewinners can be nominated by any third party and will be chosen by a committee of winners from previous years. As the prize committee gradually expands, Milner believes that any imbalances in the panel will self correct. Each year, the laureates will also select three junior researchers to receive a $100,000 'New Horizons' prize. The committee can also forgo the nomination process and award an ad hoc Fundamental Physics Prize.

For now, the winners contacted by Nature are still in shock. Andrei Linde, a cosmologist at Stanford University in California, found out about his good fortune only late last week. How will he spend his money? "This is a problem that is much more complicated than the physics problems I'm trying to solve," he says.

The next prizes will be awarded in the first quarter of 2013.

Internet entrepreneur Yuri Milner's Fundamental Physics Prize Foundation has selected nine researchers to receive US$3 million each. Here is the foundation's description of the winning work:

Nima Arkani-Hamed — For original approaches to outstanding problems in particle physics, including the proposal of large extra dimensions, new theories for the Higgs boson, novel realizations of supersymmetry, theories for dark matter, and the exploration of new mathematical structures in gauge theory scattering amplitudes.

Alan Guth — For the invention of inflationary cosmology, and for his contributions to the theory for the generation of cosmological density fluctuations arising from quantum fluctuations in the early universe, and for his ongoing work on the problem of defining probabilities in eternally inflating spacetimes.

Maxim Konstevich — For numerous contributions which have taken the fruitful interaction between modern theoretical physics and mathematics to new heights, including the development of homological mirror symmetry, and the study of wall-crossing phenomena.

Juan Maldacena — For the gauge/gravity duality, relating gravitational physics in a spacetime and quantum field theory on the boundary of the spacetime. This correspondence demonstrates that black holes and quantum mechanics are compatible, resolving the black hole information paradox. It also provides a useful tool for the study of strongly coupled quantum systems, giving insights into a range of problems from high temperature nuclear matter to high temperature superconductors.

Nathan Seiberg — For major contributions to our understanding of quantum field theory and string theory. His exact analysis of supersymmetric quantum field theories led to new and deep insights about their dynamics, with fundamental applications in physics and mathematics.

Ashoke Sen — For uncovering striking evidence of strong-weak duality in certain supersymmetric string theories and gauge theories, opening the path to the realization that all string theories are different limits of the same underlying theory.

Edward Witten — For contributions to physics spanning topics such as new applications of topology to physics, non perturbative duality symmetries, models of particle physics derived from string theory, dark matter detection, and the twistor-string approach to particle scattering amplitudes, as well as numerous applications of quantum field theory to mathematics.