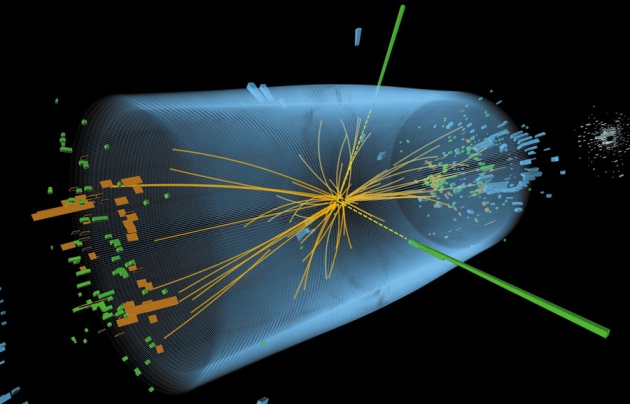 The popping of champagne corks may have subsided since scientists presented convincing evidence for the existence of the long-sought Higgs boson on 4 July1, but the work has just begun for theoretical particle physicists, who are revelling in the biggest glut of data they’ve had since the 1990s. Many are working evenings and weekends to interpret the results, and they have already generated a publication boom, with dozens of papers about the discovery appearing on the preprint server arXiv.org during the past two weeks.

Some are using the fresh data from the Large Hadron Collider (LHC) at CERN, Europe’s particle-physics laboratory near Geneva in Switzerland, to eliminate theoretical models. Others are probing for hints of new particles. Most are still hoping that their investigations will produce a grand theory to replace the almost infallible standard model of particle physics, a framework that predicts the behaviour and properties of all fundamental particles and every force except gravity. Despite its success, the standard model contains some mathematical chinks hinting that there must be a deeper truth about how the Universe works — and theorists the world over dream of finding it first.

However, for those who have spent their careers pursuing a more powerful extension of the standard model called supersymmetry (SUSY), the data offer scant succour. The theory predicts a suite of particles that are ‘super-partners’ to all the known particles, along with several types of Higgs boson. Many theorists regard SUSY as the most promising route to a broader theory of particles and forces, and a possible solution to puzzles such as the nature of cosmic dark matter.

But the LHC has yielded few signs of SUSY. Aside from a handful of tantalizing observations, the Higgs boson seems to match the standard model’s predictions perfectly. Under the weight of the LHC’s hard evidence, SUSY and other beloved theories are feeling the strain. “There’s going to be a huge massacre of theoretical ideas in the next couple of years,” predicts Joe Lykken, a theoretical physicist at Fermilab in Batavia, Illinois.

The Higgs is often described as the last missing piece of the standard model. It is a manifestation of the Higgs field, which is thought to confer mass on the other known particles. The results presented earlier this month measured the mass of the Higgs boson at about 125 gigaelectronvolts (GeV), roughly 133 times the mass of a proton. Filling in that part of the particle-physics jigsaw is a triumph, but it also exposes a fundamental vulnerability of the standard model. Its equations predict that as the Higgs interacts with other particles, the boson’s mass should fluctuate wildly. That researchers were able to pin down its mass to 125 GeV suggests that some stabilizing mechanism is at play; and theorists have previously invoked extra dimensions, new forces and exotic particles, including those predicted by SUSY, to fix the problem.

The latest data seem to rule out some of the more left-field possibilities. The very existence of the Higgs knocks out a Higgs-free version of the standard model known as Technicolor, for example. And hopes of finding extra dimensions that would mysteriously swallow up energy from collisions in the LHC are evaporating faster than the postulated microscopic black holes that also failed to make an appearance. “I was one of the people who pushed the idea of extra dimensions that we could see in our lifetime,” says Lykken. “Now that we have data, I’m becoming much more conservative.” Lykken has turned to the possibility that an exotic ‘imposter’ particle is creating a phantom Higgs signal inside the machine2.

Many of the recent arXiv papers focus on the slivers of hope for SUSY that are buried in the new data. The Higgs particle found at CERN seems to be decaying into pairs of photons about twice often as expected, potentially a sign that it is interacting with a super-partner of the Top quark, according to Fermilab’s Dan Hooper3. If the signal grows stronger as more data are collected, it could offer the first evidence of SUSY’s extra particles.

But the mass of the Higgs particle is too large to be explained by the simplest, or ‘minimal’, supersymmetry models. So some theorists are moving on to greener pastures outside the LHC’s confounding reach, developing ‘near-minimal’ versions of the theory that could explain both the heavier mass of the Higgs and the apparent absence of super-particles. It will take years’ more data to test some of the most promising ideas, says Gordon Kane, a theorist at the University of Michigan, Ann Arbor, and a longtime SUSY champion4.

It is too soon to write off SUSY, agrees Frank Wilczek, a physicist at the Massachusetts Institute of Technology in Cambridge who was awarded the Nobel Prize in Physics in 2004 for his work on the standard model. “The last man standing, as far as ambitious ideas beyond the standard model go, is supersymmetry.”

But there’s a growing sense that SUSY is being painted into a corner. “If you’re the optimistic type, you could look to these small deviations and hope they can grow,” says Tomer Volansky, a theorist at Tel Aviv University. He is setting aside dreams of replacing the standard model while he concentrates on working out how closely the Higgs’ decay patterns match predictions5. “Right now,” he says, “I want to listen to the data rather than thinking about theories.”