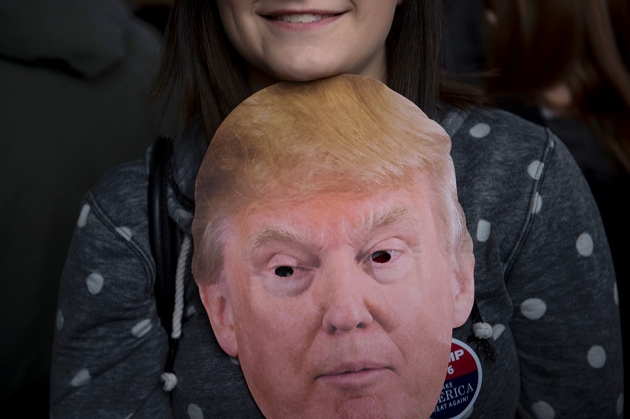 Like his opponent, Donald Trump has not emphasized science issues during his campaign.

Kaylee, a structural biologist at Yale University in New Haven, Connecticut, stays quiet when her colleagues talk about politics and religion. As a Catholic with conservative tendencies, she feels that her beliefs are unwelcome in academic institutions, where liberal views often prevail. The strain is particularly acute this year: Kaylee favours Donald Trump for US president.

Trump, a Republican, has run a brash, often divisive, campaign that has prompted some leading members of his own party to disavow him. He has drawn criticism for his treatment of women, his pledge to block Muslim immigration to the United States, and his plan to build a wall along the US–Mexico border. Still, Kaylee says, “I am 100% certain I will not vote for Hillary Clinton,” Trump’s Democratic opponent, despite her fears that supporting Trump could harm her job prospects. (For this reason, Kaylee — a postdoc — asked Nature to refer to her by a pseudonym.)

Her fears do not surprise Neil Gross, a sociologist at Colby College in Waterville, Maine. Surveys have shown that conservative faculty members are a minority in US universities, although the proportion varies by field (see ‘Field reports’). “My sense is that the candidacy of Donald Trump has really intensified disputes that were there already in academic life,” Gross says. “If Republicans in academia and science felt uncomfortable before, I think the candidacy of Mr Trump has made them all the more uncomfortable.” 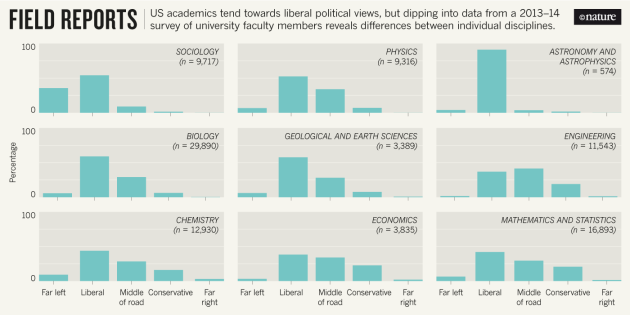 Many of the researchers interviewed for this article say that Trump and Clinton’s positions on science have not influenced their vote — in part because the candidates have largely ignored these issues on the campaign trail. “We’re living in a two-dimensional world: how much do you like each candidate, and how much do you hate each candidate?” says Stanley Young, assistant director for bioinformatics at the National Institute of Statistical Sciences in Research Triangle Park, North Carolina, who backs Trump. “The popular impression I get is Clinton would go forward with business as usual and Trump is likely to upset things a bit. There’s a lot that could be improved in science.”

David Deming, a geophysicist at the University of Oklahoma in Norman, doesn’t think it matters whether Trump and Clinton have much personal knowledge of science. “Trump said he’d appoint good people and I believe him,” says Deming, who has written newspaper opinion pieces in support of Trump.

Other scientists who plan to vote for the Republican say they have been let down by US President Barack Obama, and think that Clinton — another Democrat — would bring more of the same. To them, Trump represents change. “The current status quo seems like it’s not working for a lot of Americans,” says one Trump-supporting chemist at the University of Pittsburgh in Pennsylvania, who asked for anonymity. “I’m hopeful for a modest improvement, and that’s about as much as I can hope.”

William Briggs, a statistician at Cornell University in Ithaca, New York, likes the fact that Trump has not emphasized science. “The federal government has become far too involved in setting the scientific agenda,” says Briggs, who argues that Obama has misused science in politically charged debates over climate change and energy policy. “I think Hillary would worsen that.”

Kaylee, who disagrees with Trump’s views on women and minorities, says that her desire for a more conservative Supreme Court is driving her vote. With the next president likely to nominate at least one Supreme Court justice — a lifetime appointment — she sees Trump as a tool to move the court’s ideological balance to the right. Otherwise, Kaylee would vote for a ‘write-in candidate’ who won’t appear on the presidential ballot: her lab’s principal investigator, who has given her a safe space to express conservative views.

But not everyone is so lucky. And as the 8 November election nears, talk of the hard-fought presidential race grows trickier to escape. Some scientists who support Trump worry that political discussions in the lab will not only harm their careers in the long term, but also hinder current collaborations with colleagues, and waste time.

“I’ve avoided discussions among my real-life peers for a while,” says the anonymous chemist at the University of Pittsburgh, who prefers to talk about politics online. “A lot of people, if they’re not willing to come out in favour of Hillary, will give the third-party dodge.”