Nathan Phillips steps out onto the roof of Boston's Prudential Tower and looks down at the city 50 stories below. Up here, the rush of the wind has replaced the cacophony of car horns, screeching brakes and conversations filling the streets. And the rarefied air carries none of the odours that wrinkle an urban nose. The roof is “essentially a different atmospheric environment from the rest of the city”, says Phillips, an ecologist at Boston University in Massachusetts.

That rarefied air is what brings Phillips to the top of the tower. He has set up four book-sized collectors, one at each corner of the roof, to capture air blowing across the city. Black tubing carries the air samples to a tank inside the building, where a computer analyses their levels of carbon dioxide, carbon monoxide, methane and water vapour.

Like most cities, Boston brews up a blend of gases that covers the urban area like a dome. The top of the Prudential Tower is inside or outside this metropolitan atmosphere, depending on the weather. From his rooftop eyrie, Phillips looks towards three other sampling sites around the city and another some 70 miles west, in the green hills outside the pollution zone.

Phillips and his colleagues are using data from these sites to model how carbon dioxide and other gases move through the city, and how the mix differs from the air in rural areas. The work is part of an interdisciplinary project to study Boston's 'metabolism' — how elements are exchanged between natural and human systems. Phillips and his team are now focusing on atmospheric carbon — particularly carbon dioxide and methane. Next, they plan to look at carbon in the city's soils and water, and to track the flow of water, nitrogen and pollutants. “The goal is to understand the function of a major city,” Phillips says.

Cities under the microscope

The work is part of the growing field of urban ecology, in which scientists study cities as if they were ecosystems. In the past, artificial and natural elements have been studied separately, but urban ecologists seek to understand the interplay between them — such as how heat and high carbon dioxide levels boost plant growth, how trees cool cities and how green spaces improve animal habitat.

Using ecological methods to tease apart those relationships can improve urban areas for people as well as natural systems, says Phillips. “The scientific study of cities should yield practical benefits in terms of making our cities more sustainable,” he says.

There is a growing need for this kind of research. With cities launching efforts to slash carbon emissions, reduce water use and improve habitats, scientists are beginning to evaluate how such policies affect the overall health of the urban environment. “You need science to help you understand how you are going to best progress towards those goals,” says Steward Pickett, an urban ecologist at the Cary Institute of Ecosystem Studies in Millbrook, New York.

Viewed from the top of the Prudential Tower, Boston is all buildings, cars, pavement and people. But the metropolis also contains nearly 2 million trees, countless tonnes of soil and microbes and a web of wildlife that includes rats, coyotes, deer, more than 100 bird species and the occasional bear or moose in the suburbs. This mix makes for complex relationships — urban trees, for instance, are affected not only by soil pollutants and heat radiating from asphalt, but also by water-metering policies and landscaping. They can provide cooling shade, but they can also block winds that would blow away pollutants. To study these various factors requires a blend of biological, physical and social sciences.

In 2009, the US National Science Foundation (NSF) and the US Forest Service gave urban ecology a boost by providing US$6 million to fund 21 projects, including Phillips's, that directly address the environmental concerns of cities. Many scientists see these grants, dubbed 'Urban Long-Term Research Areas: Exploratory' (ULTRA-Ex) awards, as the first step towards fostering a much-needed research network for long-term projects in urban ecology.

The NSF has funded this type of work since the late 1990s, when it set up Long-Term Ecological Research (LTER) sites in Phoenix, Arizona, and Baltimore, Maryland. But such examples are rare. This year, an analysis of more than 8,000 ecological studies found that only 4% assessed densely populated areas1, despite calls from some ecologists and the NSF for more investigation of how people shape environments.

“What has been very surprising,” says Morgan Grove, a research forester at the Forest Service who is involved in the Baltimore LTER study, “is how much of a demand there is for urban-ecology science and data.”

The results are not always what civic leaders want to hear. An ULTRA-Ex team at the University of California, Los Angeles (UCLA), for example, raised questions about the impacts of a plan to plant one million trees in that city. The study found that some property owners are reluctant to plant trees along streets, because of maintenance costs and concerns that trees reduce visibility and lead to more crime, says Stephanie Pincetl, a land-use researcher at UCLA, who led the study. And because trees vary in water requirements and how much shade they provide, some species could increase the need for irrigation in the arid region2.

“The scientific study of cities should yield practical benefits in terms of making our cities more sustainable.”

Another ULTRA-Ex project in Cleveland, Ohio, is studying the effects of converting vacant lots into urban farms. This process could benefit cities with shrinking populations, like Cleveland's, and save millions of dollars in annual maintenance costs, says Michael Walton, an ecologist at Cleveland State University, who is leading the project. Researchers at Ohio State University in Wooster have analysed pollutants, nutrients and food webs in soil from vacant lots, and found that they are generally suitable for planting crops3. Other studies show that gardens established in these plots can, over time, develop healthy populations of pest-killing microbes and ants4, suggesting that urban farming will not necessarily boost pesticide use in cities. Such studies are becoming more common worldwide, as organizations such as the Stockholm Resilience Centre commit to studying social and ecological interactions in cities.

With two ULTRA-Ex projects that are now joining forces, Boston is emerging as a major centre of urban-ecology research. While Phillips studies the city's gaseous metabolism, Paige Warren, an ecologist at the University of Massachusetts in Amherst, is leading a group to assess how efforts to plant vegetation throughout Boston have affected air quality, people and wildlife. “There should be predictable consequences, but we haven't studied them that much,” says Warren.

Phillips and his team are collaborating with Steven Wofsy, an atmospheric scientist at Harvard University in Cambridge, Massachusetts, to model how carbon dioxide moves throughout the city. In addition to the rooftop measurements, the researchers are driving around Boston in a car outfitted with a sampling device to gather high-resolution data on street-level carbon dioxide. They are also studying how carbon dioxide levels and shade from buildings affect plants — and how trees, in turn, absorb carbon dioxide and cool buildings.

Such studies will be crucial as nations move to reduce greenhouse-gas pollution, because cities are responsible for more than two-thirds of global carbon dioxide emissions from energy use. Most of what is known about cities' overall carbon output comes from combining emissions estimates for traffic, buildings and industries, but there is considerable uncertainty in such inventories. Road transportation is thought to account for about one-third of US greenhouse-gas emissions, but credible inventories for that source in Massachusetts can differ by nearly 40%, says Lucy Hutyra, an environmental scientist and co-leader of the ULTRA-Ex project at Boston University. As cities begin to take carbon regulation more seriously, “we need to have a transparent, robust, verifiable reporting of carbon dioxide emissions”, she says. Otherwise, cities cannot track their successes and failures. 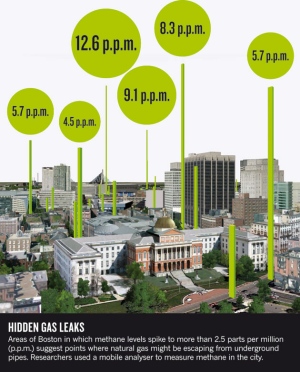 As the researchers complete the first analyses from their atmospheric model of Boston's carbon dioxide concentrations, they are finding some surprises. Their data indicate that traffic emissions in the core of the city are higher than some estimates have suggested.

Phillips and Hutyra are also working to identify natural-gas leaks from underground pipes5, and they have found more than 3,000 so far (see ‘Hidden gas leaks’). Their aim is to quantify how such leaks contribute to greenhouse-gas emissions and affect nearby plants and soil. Phillips says that methane from natural gas depletes oxygen in soils, causing plant roots to rot.

It is not yet clear whether any ULTRA-Ex sites will receive funding to establish expanded research programmes — which Tom Baerwald, a programme manager at the NSF, estimates would cost around $1 million a year.

For Phillips, future funding concerns take a back seat as he wraps up his work on the Prudential Tower. His data show that carbon dioxide levels in Boston average 388 parts per million (p.p.m.) in summer — when photosynthesis is in high gear — and 413 p.p.m. in winter. But the breeze on this August day has brought fresh air to the rooftop, and the carbon dioxide concentration is a modest 379 p.p.m. That value, says Phillips, “is probably what you'd read over Hawaii right now”. With that, he packs up and boards an elevator for a ride down to the urban air of Boston proper.