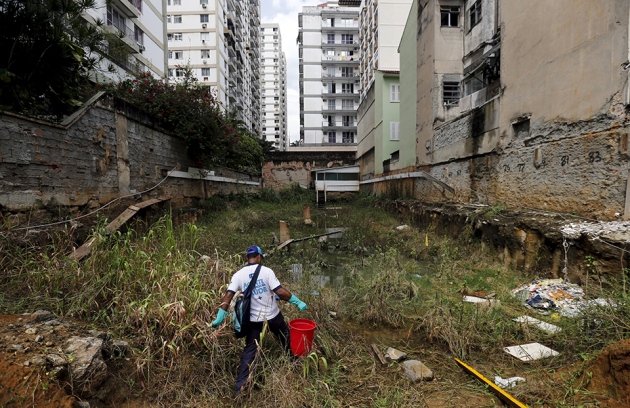 Fighting the spread of mosquitoes that carry Zika virus can help slow the rate of infection.

Public-health officials say that the first human trials of a Zika vaccine could begin this year. But they caution that it will take until at least next year, and possibly much longer, to determine whether a vaccine works.

In the meantime, they are trying to avoid a repeat of their experience with the Ebola epidemic, during which most vaccine trials began too late — just as the rate of infection began to taper off. As a result, scientists missed out on the chance to prove that the vaccines prevent people from becoming infected.

“I really don’t think that’s going to be the case with Zika,” says Anthony Fauci, director of the US National Institute of Allergy and Infectious Diseases in Bethesda, Maryland. “I seriously doubt that the vaccine trials are going to be completely impeded by a lack of cases.”

Fauci is among the scientists, government officials and representatives of the private sector who are meeting today in Bethesda, Maryland, to discuss how to speed up the development of vaccines, diagnostics and treatments against the Zika virus, which is spreading through the Americas and may be linked to debilitating birth defects.

The rate of Zika infections may drop off over time, because most people who are infected will probably develop immunity to Zika and thus cannot become reinfected. But even then, “we’ll probably need a routine vaccination to control the infection”, says Alexander Precioso, director of the clinical trials and pharmacovigilance division of the Butantan Institute in São Paulo, Brazil. That’s because mosquito-borne infections — such as Zika, dengue and yellow fever — tend to recur in waves, waxing and waning as the virus hits new populations of susceptible people, such as children.

The Butantan Institute is one of 18 agencies and companies around the world that are developing Zika vaccines. Its experimental product is an “inactivated” vaccine, based on killed, purified Zika virus, that could be tested in people by 2018 or 2019. At least four other groups are pursuing this strategy.

Inactivated vaccines are thought to be the safest type of inoculation for pregnant women, who are thought to be especially vulnerable to Zika. Babies born to mothers infected with Zika may be at greater risk of certain birth defects, such as microcephaly — an abnormally small head. On 9 March, a group of experts convened by the World Health Organization said that the development of an inactivated Zika vaccine for use in women who might become pregnant is a top research priority.

But other types of vaccine are further along in development. The US National Institutes of Health (NIH), for instance, is developing a DNA-based vaccine in which genetic material from the Zika virus would be used to induce an immune response. The agency has already used that technology in an investigational vaccine against West Nile virus.

The NIH will soon begin to manufacture the vaccine and could start to test it in healthy volunteers in the United States as early as December, Fauci says. If that goes smoothly, the NIH would then test the vaccine in a larger study in countries where Zika is spreading: “We’re going to do that where there are the most cases,” Fauci says.

In the long term, a vaccine made from a weakened Zika virus — a “live attenuated” vaccine — might be the most effective, Precioso says, because it mimics the natural course of infection more closely than other types. The NIH and several other agencies, as well as private companies, are developing live attenuated vaccines — including one that targets both Zika and dengue. But because such vaccines are complex to develop, they will probably not enter safety trials until next year.

In the meantime, says Precioso, his institute and others will press ahead with other strategies: “We’re trying to see what we can do right now to control these widespread cases.”