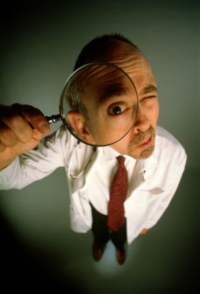 Who took the xenon?

The evidence is in every breath of air, but answers are harder to come by. Xenon, the second heaviest of the chemically inert noble gases, has gone missing. Our atmosphere contains far less xenon, relative to the lighter noble gases, than meteorites similiar to the rocky material that formed the Earth.

The missing-xenon paradox is one of science’s great whodunits. Researchers have hypothesized that the element is lurking in glaciers, minerals or Earth’s core, among other places.

“Scientists always said the xenon is not really missing. It’s not in the atmosphere, but it’s hiding somewhere,” says inspector, sorry, professor Hans Keppler, a geophysicist at the University of Bayreuth in Germany. He and his colleague Svyatoslav Shcheka are the latest geoscientists to tackle the case, in a report published today in Nature1.

They went looking for answers in minerals. Magnesium silicate perovskite is the major component of Earth’s lower mantle — the layer of rock between the crust and the core, which accounts for half the planet’s mass. The sleuthing scientists wondered whether the missing xenon could be squirreled away in pockets in this mineral. “I was quite sure that it must be possible to stuff noble gases into perovskite,” says Keppler. “I suspected xenon may be in there.”

The researchers tried dissolving xenon and argon in perovskite at temperatures exceeding 1,600 ºC and pressures about 250,000 times those at sea level. Under these extreme conditions — similar to those in the lower mantle — the mineral sopped up argon yet found little room for xenon.

Those results may sound disappointing, but they gave Keppler and Shcheka an idea. What if xenon isn’t hiding at all?

More than 4 billion years ago, Earth was molten. Meteorites bombarded the planet, causing it to lose much of its primordial atmosphere. Keppler and Shcheka suggest that argon and the other noble gases hid in perovskite, but most of the xenon could not dissolve in the mineral, and disappeared into space.

“This is completely different from what everybody else is saying. They are saying the xenon is here but it's hiding somewhere. We are saying it is not here because very early in Earth’s history it had no place to hide,” says Keppler.

When Earth cooled, argon and other noble gases started seeping out of the perovskite and filling the atmosphere. Xenon, dissolved in the mineral at only trace levels, could in turn make up only trace amounts of the atmosphere.

As further support for their hypothesis, the scientists point out that the relative ratios of three noble gases — xenon, krypton and argon — in the atmosphere roughly correspond to their solubility in perovskite.

The theory may also explain why lighter isotopes of xenon are even more depleted from the atmosphere than heavier ones. “Nobody has ever been able to explain this,” says Keppler. He and Shcheka suggest that over billions of years, when xenon was seeping into space, lighter isotopes were most likely to escape.

Not so fast, says Chrystele Sanloup, a geoscientist at Pierre and Marie Curie University in Paris: “I don't think this discovery accounts for the missing xenon.” She notes that the theory does not totally explain all of the excess heavy xenon in the atmosphere, nor for additional xenon made from the radioactive decay of uranium and plutonium in rocks.

Besides, any explanation for Earth’s missing xenon should also apply to Mars, where the atmosphere also has a dearth of the noble gas. Keppler and Shcheka suggest that here, too, the ancient xenon escaped into space: the planet’s puny gravitational field prevented it from holding onto the gas. As a result, all xenon currently found on Mars is what little could dissolve in perovskite.

But Sanloup doubts that Mars has enough (if any) perovskite to explain the xenon in its atmosphere. Until the mystery of missing Martian xenon is solved, she says, the jury is still out on where Earth’s went.

This article orginally described the Earth's lower mantle as molten. It is in fact solid. It also stated that Keppler's experiments were performed at 250 times atmospheric pressure. It should have read 250,000 times. The text has been changed to correct both of these errors.