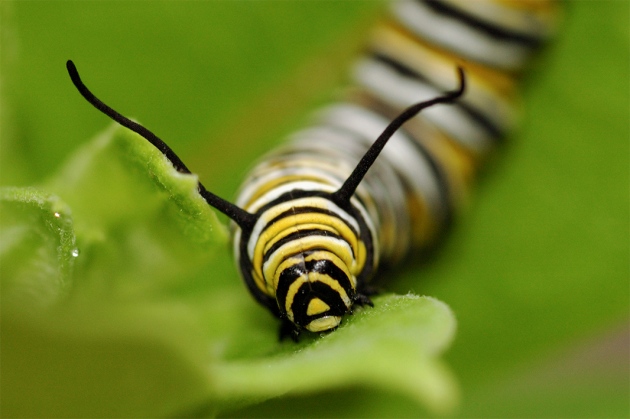 Some caterpillars, such as this monarch (Danaus plexippus), do just fine without all the microbes that keep human guts working.

Many animals, including humans, can’t live healthy lives without the microbes in their guts. These intestinal residents break down food and help to fight off disease-causing microorganisms. But the latest research suggests that some species, including caterpillars, can do just fine without them. It’s possible, say scientists who have studied these symbiotic bacteria, fungi and other microbes, that gut microbiomes might be less ubiquitous than previously assumed.

Tobin Hammer, an evolutionary ecologist at the University of Colorado, Boulder, investigated the intestinal microbes of 124 species of wild, leaf-eating caterpillars from the Americas by sequencing a gene commonly used to identify microorganisms. In a preprint posted to the bioRxiv server, Hammer and his team report that they found no sign of what he calls “resident” microbes — a group of organisms that have co-evolved with their hosts1.

The paper is the latest in a small but growing list of studies that have failed to find gut microbiomes in various animal and insect species. Researchers have had some trouble getting such papers published, probably because it's hard to prove a negative, says Hammer.

Conventional wisdom holds that herbivores, such as cows, need gut microbes to break down the fibres in plant cell walls. Because all of the caterpillars that Hammer studied ate leaves, he thought they would harbour a diverse and complex microbiome.

“But it’s important to remember: caterpillars are not mini cows,” says Hammer. When scientists look at faecal matter from large herbivores, they find a lot more microbe DNA than plant DNA. But with caterpillars, the opposite seems true. The few bacteria and viruses Hammer found appeared to come from the insect’s food and environment.

The ecologist also tested whether any gut microbes in the caterpillars helped the insects to survive in some way. He hatched 72 tobacco hornworms (Manduca sexta), a common North American moth, and dosed the caterpillars with varying levels of antibiotics intended to wipe out any microbes the insects contained. But the treatments had no impact on the hornworms' health or survival.

Past studies have also indicated that caterpillars don’t have microbiomes, says Melissa Whitaker, an ecologist who studies the relationships between caterpillars and bacteria at Harvard University in Cambridge, Massachusetts. But those studies looked only at a handful of species; Hammer’s study looked at more than 100. Previous research also lacked experimental data on whether the microbes present in caterpillars were beneficial. Taken together, Whitaker thinks that the implications of Hammer's work are huge.

“They’re one of the largest groups of herbivores,” Whitaker says. A project at University College London, UK, estimates that there are about 180,000 known caterpillar species. “If they’re not relying on the bacteria in their guts to help with their diet, what are they relying on?” says Whitaker. “It’s got to be something entirely different. It’s fascinating.”

Whitaker thinks that results like Hammer’s might be more common than they seem in the literature. “I think there’s some selection bias,” she says. Researchers might be reluctant to submit their negative results, and journals may be equally reluctant to publish them.

It’s a familiar story — when Whitaker first started looking at caterpillar gut bacteria, she was convinced there was something wrong with her data or her methods. Eventually, however, it became clear that there were no intestinal symbionts to find2.

Other scientists have had similar experiences. Jon Sanders, a postdoc at the University of California, San Diego, investigates the co-evolution of microbes and their hosts. In a study of Peruvian ants, Sanders found that some ground-dwelling species seemed to lack an intestinal microbiome entirely. His paper spent a year and a half in review before it was rejected. Sanders eventually posted it to bioRxiv3, and it’s now in review at the journal Integrative and Comparative Biology.

Entomologist Matan Shelomi, affiliated with the Max Planck Institute for Chemical Ecology in Jena, Germany, spent years studying the gut microbiomes of herbivorous stick insects (Phasmatodea). He discovered that there were no microbes in the insects’ guts4. Later, he found evidence that the Phasmatodea could break down pectin5 — another fibre found in plant cell walls — using genes stolen from bacteria early on in the insects' evolutionary history. Shelomi eventually published his findings6, but “it took a lot of work and arguing during the peer-review process”, he says.

It's possible that some vertebrates lack gut microbiomes, too. “Anecdotally, I’ve heard from researchers having similar problems in birds and fish,” says Hammer. His study included data from several vertebrate species as controls. Some, such as goats, do harbour a gut microbiome. But when Hammer looked for gut microbes in faeces from geese and bats, he found none.

There is still only a handful of published studies pointing to microbe-free guts. But now that people are looking, Whitaker, Hammer, Shelomi and Sanders all think that there will be other, similar findings in the future.

“As a discipline we’re really ready to claim that everything is related to the microbiome and every organism has one,” says Whitaker. “It only takes one exception before all of that goes out the window.”