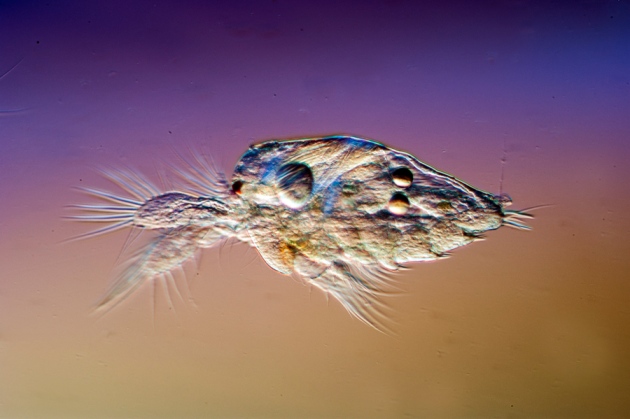 A half-a-millimetre-long larva of the copepod Macrocyclops albidus, inside which parasites engage in a tug-of-war for mind control.

If two tapeworms infect the same host, they can team up to boost their influence over its behaviour. But if they find themselves at cross-purposes, they may actively sabotage each other in a competition to seize control, researchers have suggested1.

Scientists have long known that parasites can influence host behaviour. Some nematodes, for example, can make otherwise cautious ants turn bright red and raise their abdomens in a berry patch. This increases the ant's chances of being mistaken for a fruit and being consumed by a bird, which is the host for the next stage of the nematode's life cycle. It has even been suggested that the protozoan Toxoplasma gondii may be responsible for changes in human behaviour, such as risk taking.

In many cases, parasites go through different life-cycle stages in different hosts, and so must affect their host's actions to allow the parasite to move at the right time. But if the host contains multiple parasites of different ages, the parasites will have competing interests as to when that happens.

Nina Hafer and Manfred Milinski, who study parasites at the Max Planck Institute for Evolutionary Biology in Ploen, Germany, infected small crustaceans called copepods (Macrocyclops albidus) with multiple Schistocephalus solidus tapeworms. These live in copepods and then move to fish for their next life-cycle stage.

Work by a team that included Milinski2 and by others has previously shown that infecting copepods with younger tapeworms that are not ready to live in fish results in copepods that are less active than uninfected animals — and hence less likely to be eaten by fish. When the parasites are ready to move, they make the copepods become more active than their tapeworm-free relatives, although the mechanism of manipulation is unknown. The copepods are therefore more likely to be spotted and to be eaten by a passing fish.

Hafer and Milinski found that when two tapeworms in the same copepod were ready to move hosts, they combined to make the copepod even more active than a single parasite would, the researchers report in Evolution1. But when an older tapeworm was sharing a host with a younger one, the older animal always won out. The younger tapeworms failed to influence their hosts at all when in conflict with their older brethren, and did not lower the activity compared with hosts infected with only one parasite.

The activity of the host does not reach an intermediate level as a result of the two competing parasites. This suggests that the older parasite is “sabotaging” the younger one's activity, says Hafer, because “we don’t expect the non-infective parasite to stop what it’s doing,” says Hafer. The older parasite even won out when it was in competition with two younger individuals.

Frank Cézilly, who studies host–parasite interactions at the University of Bourgogne in Dijon, France, says that the work is interesting and solid because it used laboratory-raised hosts, eliminating the risk that the copepods had previously been exposed to parasites.

However, Cézilly urges caution in claiming that one parasite is actively ‘sabotaging’ the other, in the absence of an understanding of the mechanism by which the parasites are influencing their host. “It could be sabotage, but it could be just that the younger parasite can’t overcome [pre-existing] manipulation by the older parasite,” he says.