In astronomy, every photon counts. So astronomers build ever-bigger telescope mirrors to catch light, but they also pay close attention to how reliably the cameras at the back of the telescopes record each photon.

Ben Mazin, an astronomer at the University of California, Santa Barbara, believes that he is on the cusp of a camera breakthrough: his lab is working on a superconducting detector that could eventually replace the charge-coupled devices (CCDs) that have become de rigueur in both consumer and astronomical digital cameras. Mazin’s detectors, known as microwave kinetic inductance detectors (MKIDs), can simultaneously count photons, measure their energy and record each one’s time of arrival — something that CCDs can do only after the light is split with a prism or a grating, an extra step that adds to the loss of photons. 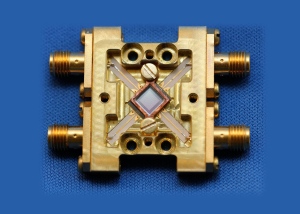 On 12 January, at a meeting of the American Astronomical Society in Austin, Texas, one of Mazin’s graduate students presented the first results from an array of 1,024 MKIDs that has been installed at the 5.1-metre telescope at Palomar Observatory in California. The detectors captured individual photons with microsecond precision as they streamed in from a bright pulsar in the Crab Nebula. CCDs have read-out times too slow for such measurements.

Mazin says that if MKIDs could be scaled up into bigger arrays, they could be useful in the search for gravitational waves and the direct detection of planets outside the Solar System. “We’re a step towards a perfect detector,” he says. The major drawback is that the detectors must be cooled to 100 millikelvin, which makes them difficult to use in small spaces or on a spacecraft.

Nevertheless, Fred Chaffee, director of the Gemini Observatory, which runs 8.1-metre telescopes in Hawaii and Chile, is impressed. “This looks like the dream detector we’ve all been waiting for,” he says. “Very, very slick.”

With CCDs, incoming photons knock electrons loose in a semiconducting material, causing a small but measurable change in charge. By contrast, MKIDs rely on resonating circuits made of superconducting materials, in which the electrons move in 'Cooper pairs' that are bound by low-temperature quantum effects. When a photon strikes the circuit, it breaks apart one or more Cooper pairs, shifting the resonant frequency of the circuit and increasing energy losses. These two signals can be measured by a microwave probe of the circuit.

The detectors were invented by Jonas Zmuidzinas, an astronomer at the California Institute of Technology (Caltech) in Pasadena, and his colleagues in 20031, to fulfil a need in X-ray astronomy. Zmuidzinas says that the devices are now coming into their own in that part of the spectrum: a 2,000-pixel array of MKIDs is being deployed later this year at the 10.4-metre dish of the Caltech Submillimeter Observatory in Hawaii. But Mazin, who was part of Zmuidzinas's team, has committed himself to adapting MKIDs for visible-light astronomy, a tougher market given that CCDs are good enough in most cases.

One area in which MKIDs would offer substantial improvement is the effort to detect the tiny variations in radio signals from millisecond pulsars that could prove the existence of gravitational waves. A key source of error comes from a smearing effect caused by the signals passing through plasma in the interstellar medium. This smearing affects radio waves but not optical light, so if Mazin can measure the precise arrival time of optical photons associated with the millisecond pulsars, the error can be eliminated.

Another application would be in the direct detection of extrasolar planets. Astronomers need an enormously steady image to gather the very faint light from planets. Adaptive optics systems deform the shape of a telescope mirror to correct for atmospheric turbulence and minimize jitters in the image. But this correction has to happen fast, in real time, and the image recorded by CCDs cannot be read out fast enough. So the systems shunt light to a separate detector that does the quick atmospheric analysis and directs the deformable mirror. MKIDs could cut out this step and measure the distortions directly.

Eventually, says Mazin, the detectors could be used in space-based planet-finding telescopes. Those telescopes are probably a decade or two away — but that is fine with Mazin, because there is still plenty of room to improve MKIDS. “We’re on the bleeding edge, no doubt about that,” he says.