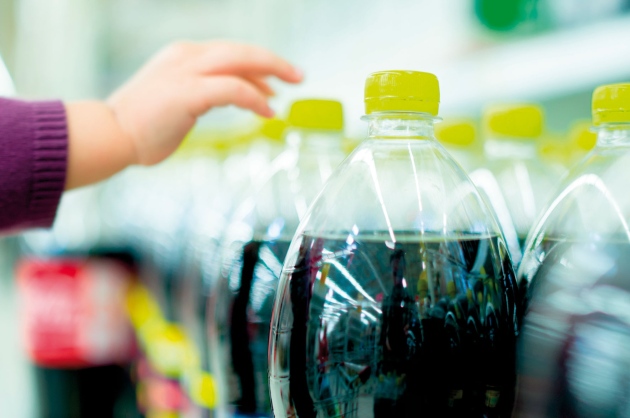 The WHO recommends that adults have less sugar per day than is found in one glass of many soft drinks.

Scientists are gearing up for a battle with the food industry after the World Health Organization (WHO) moved to halve its recommendation on sugar intake.

Nutrition researchers fear a backlash similar to that seen in 2003, when the WHO released its current guidelines stating that no more than 10% of an adult’s daily calories should come from ‘free’ sugars. That covers those added to food, as well as natural sugars in honey, syrups and fruit juice. In 2003, the US Sugar Association, a powerful food-industry lobby group based in Washington DC, pressed the US government to withdraw funding for the WHO if the organization did not modify its recommendations. The WHO did not back down, and has now mooted cutting the level to 5%.

“These are reasonable limits,” says Walter Willett, head of nutrition at the Harvard School of Public Health in Boston, Massachusetts. “Five per cent of calories is just a bit less than in a typical serving of soda, and we have good evidence of increased risk of diabetes with that intake, which of course increases with greater intake.”

But Marion Nestle, a nutrition researcher at New York University, predicts that grocery manufacturers are not going to take the proposal lying down. “If people follow this advice, that would be very bad for business,” she says. 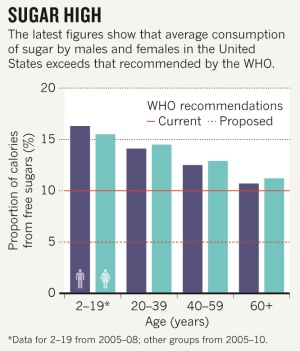 The WHO made its recommendations in draft guidelines that were released for public consultation on 5 March. In halving the 10% figure, it cited the need to fight obesity — worldwide incidence reached 11% in 2008 — and to prevent tooth decay. Five per cent of daily calories is equivalent to about 25 grams, or 6 teaspoons, of sugar. Many people around the world consume more than that — young adults in the United States, for example, get more than 14% of their calories from free sugars, according to the US Centers for Disease Control and Prevention in Atlanta, Georgia (see ‘Sugar high’).

Jim Mann, a nutrition researcher at the University of Otago in New Zealand, who worked on one of the meta-analyses and helped to develop the guidelines, says that the science supporting a drop in sugar consumption has become more conclusive since 2003. But the biggest difference is in the process the WHO uses to produce its recommendations.

For the first time in the production of nutrition guidelines, the agency adopted the Grading of Recommendations Assessment, Development and Evaluation (GRADE) system, a more formal, standardized approach to developing guidelines compared with a literature review. It requires a clear statement of the research question, uses the gold-standard methodology for literature review and meta-analysis developed by the Cochrane Collaboration — a non-profit group headquartered in Oxford, UK, dedicated to the systematic analysis of medical research — and weighs up biases and confounding factors before an expert committee develops recommendations. This pain-staking process “doesn’t give much leeway for opinions”, says Mann.

His analysis showed a strong confirmation of the benefits of the 10% limit, especially for preventing tooth decay, with “good clues” that it would be worth going lower, although the evidence for that is weaker.

This is likely to form the focus of the sugar lobby’s attacks, researchers say. Most industry groups have refused to comment until they have prepared submissions to the consultation, but a few have already criticized the lower limit. The US Sugar Association, for example, released a statement pointing out that the US Institute of Medicine and the European Food Safety Authority have said in the past (in 2005 and 2010, respectively) that there was no conclusive evidence to justify such a limit on free sugars.

Industry submissions to the consultation are likely to be forceful. When the WHO recommended the 10% limit, it faced a ferocious attack on the credibility of its science from several camps — including the administration of then US President George W. Bush. The administration said that the WHO report did not meet US data-quality standards, was not properly peer-reviewed, and failed to separate scientific and policy recommendations.

Nestle thinks that if the WHO is willing to face that kind of pressure again, it must have confidence not only in its science, but also in the political climate. “There’s so much evidence now that says that people would be healthier if they ate less sugar, it may be that things have changed,” she says.

This time around, the WHO is taking steps to counter excessive lobbying. Anyone who wishes to submit a comment on the draft guidelines must first complete a declaration-of-interest form. And the organization says that it will stand firm against any push-back from the food industry. “If pressure comes to the organization, then we’re very well equipped to resist that type of pressure,” said Francesco Branca, director of the WHO’s Department for Nutrition for Health and Development, at a press conference.