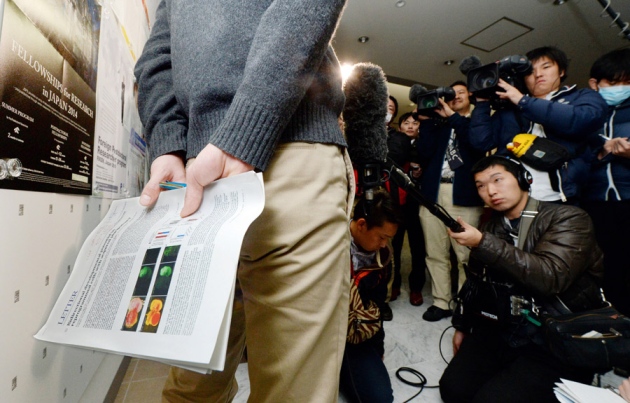 The Asahi Shimbun via Getty

A RIKEN spokesperson talks to reporters after two Nature stem-cell papers by researchers at RIKEN's Center for Developmental Biology in Kobe, Japan, were criticized by other scientists.

The veracity of two papers that detailed a method to reprogram mature cells into an embryonic state by exposing them to stress has come under more pressure. Days after the first author’s institute reported “serious errors” in the papers’ methodology, questions were raised over the same researcher’s doctoral dissertation and the cells used in the study.

On 14 March, RIKEN, Japan’s largest research organization, which runs the Center for Developmental Biology (CDB) in Kobe where first author Haruko Obokata and several of her co-authors work, announced the interim findings of its investigation into allegations of irregularities in the method. One RIKEN investigator advised them to retract the papers. Then, in further developments, Obokata called into question the quality of her own doctoral thesis, which is already under investigation by the university that granted it. And a co-author on the reprogramming papers says that he is sending some of the cells produced in the experiments for independent verification.

The two papers made headlines around the world when they were published in Nature on 30 January (H. Obokata et al. Nature 505, 641–647 and 676–680; 2014). The technique, which the team called stimulus-triggered acquisition of pluripotency (STAP), is important because cells reprogrammed into an embryonic state are ideal for studying the development of disease or the effectiveness of drugs.

But within weeks, the papers were attacked by scientists over their use of several duplicated images and by those who could not reproduce the work, prompting RIKEN to investigate.

At the press conference, a five-person panel, including RIKEN director and Nobel-prizewinner Ryoji Noyori, noted six problems. Two were dismissed as unintentional mistakes. Four others — including an image of an electrophoresis gel that seemed to have had a lane added in later, and plagiarism in part of the methods section — were deemed more serious and are still under investigation. The panel offered no clear answers about whether the STAP phenomenon is real, but noted that RIKEN co-author Hitoshi Niwa was attempting to replicate the method. It added that there were no signs of fraud.

“What did I inject into those blastocysts? This is what I want to know.”

Panel member Masatoshi Takeichi, director of the CDB, also told reporters that the three co-authors from the institute — Obokata, Niwa and Yoshiki Sasai — had agreed to retract the paper at his request. But a statement in Japanese by the trio, delivered at the press conference, said only that they were “considering a retraction and contacting outside authors to discuss that possibility”. Charles Vacanti, of Harvard Medical School in Boston, Massachusetts, who is the senior corresponding author on the first of the two papers (H. Obokata et al. Nature 505, 641–647; 2014), has made it clear that he has no intention of retracting unless there is compelling evidence that the data are incorrect.

To add confusion, the first 20 pages of Obokata’s thesis, completed in 2011 at Waseda University in Tokyo, were found by NatureNews to be taken from a US National Institutes of Health primer on stem cells, and one image in the results section has been reproduced from a commercial website without a citation. Moreover, Vacanti, who was listed on the thesis as a member of the examination committee that approved it, told Nature News: “I was not presented with or asked to read a copy of her dissertation.”

Last week, Obokata wrote to an unnamed professor at Waseda University indicating that she wanted to retract the thesis. She has not, however, formally requested a retraction.

A desire to resolve the STAP controversy has led to an investigation into the identity of the cells in the papers. Teruhiko Wakayama of the University of Yamanashi, a senior author on the second paper (H. Obokata et al. Nature 505, 676–680; 2014), helped to test the pluripotency of Obokata’s STAP stem cells by injecting them into mouse embryos. By turning into different cell types within these mice, the cells proved they had the developmental capacity that STAP promises. But he has now sent the cells that Obokata gave him to an independent institute for genetic analysis to see if they are really STAP cells. “What did I inject into those blastocysts?” Wakayama asks. “This is what I want to know more than anything else.” He hopes to have his answer in the next few months.