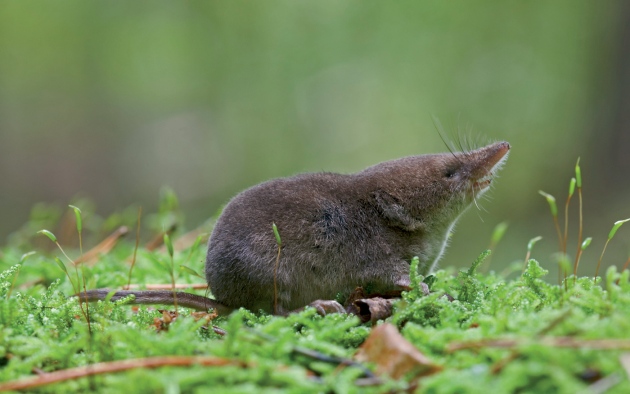 Skulls of the common shrew (Sorex araneus) shrink by about 15% in winter and regrow the next summer.

Common shrews shrink their heads — including their skulls — in winter, researchers have found. They believe that this dramatic example of downsizing may help the animals to survive when food is scarce.

Individual wild common shrews (Sorex araneus) captured and tagged in Germany showed large reductions in skull size and body mass over the winter. Their spines also got shorter, and major organs, including the heart, lungs and spleen, shrank. Even their brain mass dropped by 20–30%, according to Javier Lázaro, a biologist at the Max Planck Institute for Ornithology in Radolfzell, Germany. In spring, the animals started to regrow.

“We hypothesize that these seasonal changes could have adaptive value,” says Lázaro, who led the work. Shrews have an extremely fast metabolism, he points out, and reducing their body mass during winter might increase their chances of survival, because they wouldn’t need so much food. In particular, he adds, “reducing brain size might save energy, as the brain is energetically so expensive”.

The researchers trapped live shrews, then anaesthetized, X-rayed and weighed them. They also fitted each animal with a microchip, so they could monitor changes in shrews that were recaptured over their roughly 14-month lifespan. Twelve animals were captured during each key life stage: the first summer of their lives, the next winter and the following spring and summer.

The results are published in Current Biology1 on 23 October. The shrews’ skulls shrank by about 15% from summer to winter, an effect that the X-ray images suggest was caused by resorption of tissue at the joints between skull bones. This bone then regenerated in spring, although the skulls didn’t quite return to their original summer size.

“Tracking of individual animals is crucial here — this is really great work,” says zoologist Leszek Rychlik of Adam Mickiewicz University in Poznań, Poland. Rychlik has previously found2 that common shrews in northeastern Poland show seasonal changes in body mass on a population level. But Lázaro’s team is the first to show that the skulls of individual shrews shrink.

Lázaro and his colleagues are now investigating which brain structures change most from season to season, and whether the animals experience any cognitive impairments in winter. If they do, it might not matter too much, says Rychlik. “Their winter life is more boring,” he says. “They are less active, less involved in interactions, not busy with reproduction and searching for partners. They are just focused on foraging and saving energy.”

Just how many species might shrink their brains for winter is not known. Even at the population level, seasonal comparisons are often not possible, because biologists tend to collect specimens in summer rather than winter. In work being prepared for publication, Rychlik has found seasonal differences in skull size and body mass in two other members of the red-toothed-shrew sub-family: the pygmy shrew (Sorex minutus) and the Eurasian water shrew (Neomys fodiens). Some of Lázaro’s co-authors have also found3 similar differences in two species of weasel.

These differences were observed in dead animals, but “we think they are caused by the same individual shrink–regrow process”, says Lázaro. He adds that a similar ability might exist in other small, high-metabolism animals that live in seasonal environments and don’t hibernate or use other strategies to save energy. Although still exceptional, he says, “the phenomenon might be more common than we think”.