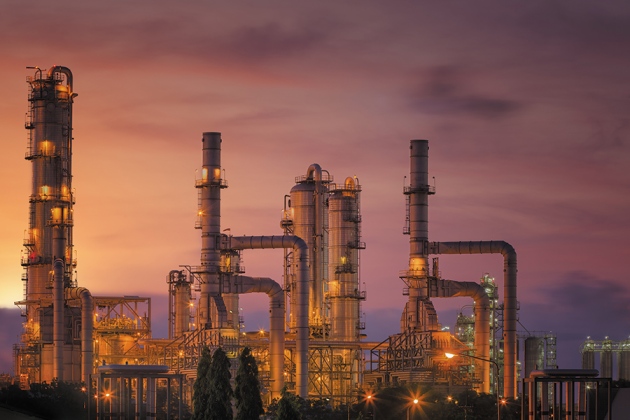 Most industrial chemists spend their days separating the components of large quantities of chemical mixtures into pure or purer forms. The processes involved, such as distillation, account for 10–15% of the world's energy consumption1, 2.

Methods to purify chemicals that are more energy efficient could, if applied to the US petroleum, chemical and paper manufacturing sectors alone, save 100 million tonnes of carbon dioxide emissions and US$4 billion in energy costs annually3 (see 'Cutting costs'). Other methods would enable new sources of materials to be exploited, by extracting metals from seawater, for example.

Unfortunately, alternatives to distillation, such as separating molecules according to their chemical properties or size, are underdeveloped or expensive to scale up. Engineers in industry and academia need to develop better and cheaper membranes and other ways to separate mixtures of chemicals that do not rely on heat.

Here, we highlight seven chemical separation processes that, if improved, would reap great global benefits. Our list is not exhaustive; almost all commercial chemicals arise from a separation process that could be improved.

Hydrocarbons from crude oil. The main ingredients for manufacturing fossil fuels, plastics and polymers are hydrocarbons. Each day, refineries around the world process around 90 million barrels of crude oil — roughly 2 litres for every person on the planet. Most do so using atmospheric distillation, which consumes about 230 gigawatts (GW) globally3, equivalent to the total energy consumption of the United Kingdom in 2014 or about half that of Texas. In a typical refinery, 200,000 barrels per day of crude oil are heated in 50-metre-tall columns to liberate thousands of compounds according to their boiling points. Light gases emerge at the cool top (at around 20 °C); progressively heavier fluids leave at lower and hotter points (up to 400 °C). 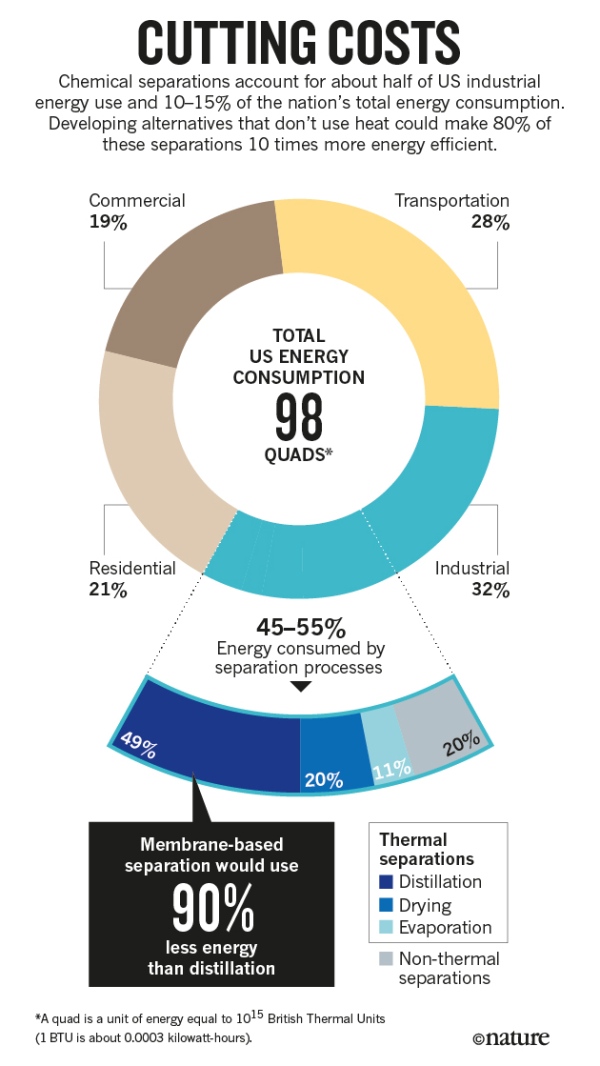 Finding an alternative to distillation is difficult because crude oil contains many complex molecules, some with high viscosities, and myriad contaminants, including sulfur compounds and metals such as mercury and nickel. It is feasible in principle to separate hydrocarbons according to their molecular properties, such as chemical affinity or molecular size. Membrane-based separation methods, or other non-thermal ones, can be an order of magnitude more energy efficient than heat-driven separations that use distillation. But little research has been done.

Researchers need to find materials that are capable of separating many families of molecules at the same time, and that work at the high temperatures needed to keep heavy oils flowing without becoming blocked by contaminants.

Uranium from seawater. Nuclear power will be crucial for future low-carbon energy generation. Although the trajectory of the nuclear industry is uncertain, at current consumption rates, known geological reserves of uranium (4.5 million tonnes) may last a century4. More than 4 billion tonnes of uranium exist in seawater at part-per-billion levels.

Scientists have sought ways to separate uranium from seawater4 for decades. There are materials capable of capturing uranium, such as porous polymers containing amidoxime groups. But these molecular 'cages' also capture other metals, including vanadium, cobalt and nickel.

Chemists need to develop processes to remove these metals while purifying and concentrating uranium from seawater. In 1999–2001, Japanese teams captured around 350 grams of uranium using an adsorbent fabric4. Starting up a new nuclear power plant requires hundreds of tonnes of uranium fuel, so the scale of these processes would need to be vastly increased. In particular, efforts to reduce costs for adsorbent materials are needed.

Similar technologies could capture other valuable metals4, such as lithium, which is used in batteries. The quantity of lithium dissolved in the oceans is ten times larger than that in known land-based resources; the limited size of the latter may become a long-term barrier to energy storage.

Alkenes from alkanes. Manufacturing plastics such as polyethene and polypropene requires alkenes — hydrocarbons such as ethene and propene, also known as olefins. Global annual production of ethene and propene exceeds 200 million tonnes, about 30 kilograms for each person on the planet. The industrial separation of ethene from ethane typically relies on high-pressure cryogenic distillation at temperatures as low as −160 °C. Purification of propene and ethene alone accounts for 0.3% of global energy use, roughly equivalent to Singapore's annual energy consumption.

As with crude oil, finding separation systems that do not require changes from one phase to another could reduce by a factor of ten the energy intensity of the process (energy used per unit volume or weight of product), and offset carbon emissions by a similar amount5. For example, porous carbon membranes are being developed that can separate gaseous alkenes and alkanes (also called paraffins) at room temperature and at mild pressures (less than 10 bar)6. But these cannot yet produce the more than 99.9% pure alkenes needed for chemicals manufacturing.

In the short term, 'hybrid' separation techniques might help — membranes can be used for bulk separation and cryogenic distillation for 'polishing' the product. Such approaches would reduce the energy intensity of alkene production by a factor of 2 or 3, until membranes become good enough to replace distillation entirely. A major hurdle is scaling up the membranes — industry might require surface areas of up to 1 million square metres. Deployment on this scale will require new manufacturing methods as well as advances in materials' properties.

Greenhouse gases from dilute emissions. Anthropogenic emissions of CO2 and other hydrocarbons, such as methane released from refineries and wells, are key contributors to global climate change. It is expensive and technically difficult to capture these gases from dilute sources such as power plants, refinery exhausts and air.

Liquids such as monoethanolamine react readily with CO2, but because heat must be applied to remove CO2 from the resulting liquid, the process is not economically viable for power plants. If the approach was applied to every power station in the United States, CO2 capture could cost 30% of the country's growth in gross domestic product each year7. Cheaper methods for capturing CO2 and hydrocarbon emissions with minimal energy costs need to be developed.

A complicating factor is deciding what to do with the purified product. CO2 could be used in a crude-oil production method known as enhanced oil recovery, or in vertical farming and as chemical and biorefinery feedstocks. But human activities emit so much of the gas8 that in practice much of it will need to be stored long term in underground reservoirs, raising other issues. 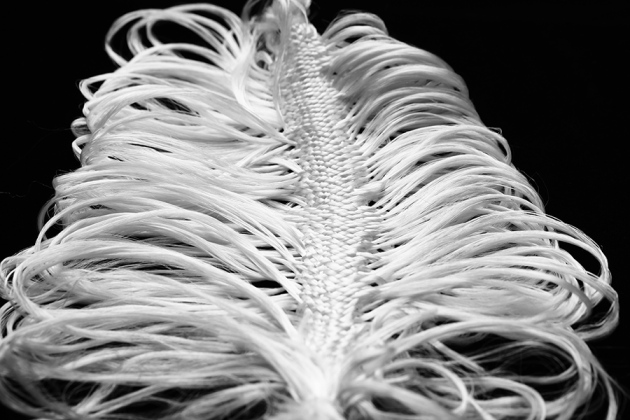 High-capacity (HiCap) polymers can separate metals such as uranium from solution.

Rare-earth metals from ores. The 15 lanthanide metals, or rare-earth elements, are used in magnets, in renewable-energy technologies and as catalysts in petroleum refining. Compact fluorescent lamps use europium and terbium, for example, and catalytic convertors rely on cerium. Producing rare earths economically is a problem of separation, not availability. Despite their name, most of the elements are much more plentiful in Earth's crust than gold, silver, platinum and mercury. Unfortunately, rare earths are found in trace quantities in ores and are often mixed together because they are chemically similar.

Separation of rare earths from ores requires mechanical approaches (such as magnetic and electrostatic separation) and chemical processing (such as froth flotation). These are inefficient: they must contend with the complex compositions of mined ores, use large volumes of chemicals, and produce lots of waste and radioactive by-products. Improvements are sorely needed.

The recycling of rare earths from discarded products is increasing. Bespoke processes could be designed because the chemical and physical compositions of the products are well defined. A variety of metallurgical and gas-phase extraction methods have been explored, but recycled rare earths are not yet part of most supply chains9, 10. Research is needed to reduce the ecological impact of key items containing rare earths over their whole life cycle.

Benzene derivatives from each other. The supply chains of many polymers, plastics, fibres, solvents and fuel additives depend on benzene, a cyclic hydrocarbon, as well as on its derivatives such as toluene, ethylbenzene and the xylene isomers. These molecules are separated in distillation columns, with combined global energy costs of about 50 GW, enough to power roughly 40 million homes.

The isomers of xylene are molecules with slight structural differences from each other that lead to different chemical properties. One isomer, para-xylene (or p-xylene), is most desirable for producing polymers such as polyethylene terephthalate (PET) and polyester; more than 8 kilograms of p-xylene is produced per capita each year in the United States. The similar size and boiling points of the various xylene isomers make them difficult to separate by conventional methods such as distillation.

Advances in membranes or sorbents could reduce the energy intensity of these processes. As for other industrial-scale chemical processes, implementing alternative technologies for separating benzene derivatives will require that their viability be proved on successively larger scales before commercial implementation. Constructing a chemical plant can cost US$1 billion or more, so investors want to be sure that a technology will function before building new infrastructure.

“A major hurdle is scaling up membranes.”

Trace contaminants from water. Desalination — whether through distillation or membrane filtration — is energy and capital intensive, making it unfeasible in many dry areas. Distillation is not the answer: thermodynamics defines the minimum amount of energy needed to generate potable water from seawater, and distillation uses 50 times more energy than this fundamental limit.

Reverse-osmosis filtration, a process that applies pressure across a membrane to salty water to produce pure water, requires only 25% more energy than the thermodynamic limit5. But reverse-osmosis membranes process water at limited rates, requiring large, costly plants to produce a sufficient flow. Reverse osmosis of seawater is already done on commercial scales in the Middle East and Australia. But the practical difficulties of handling more-polluted water — including corrosion, biofilm formation, scaling and particulate deposition — mean that expensive pretreatment systems are also needed.

Developing membranes that are more productive and resistant to fouling would drive down the operating and capital costs of desalination systems to the point that the technique is commercially viable for even highly polluted water sources.

Academic researchers and policymakers should focus on the following issues.

First, researchers and engineers must consider realistic chemical mixtures. Most academic studies focus on single chemicals and infer the behaviour of mixtures using this information. This approach risks missing phenomena that occur only in chemical blends, and ignores the role of trace contaminants. Academics and leaders in industrial research and development should establish proxy mixtures for common separations that include the main chemical components and common contaminants.

Second, the economics and sustainability of any separation technology need to be evaluated in the context of a whole chemical process. Performance metrics such as cost per kilogram of product and energy use per kilogram should be used. The lifetime and replacement costs of components such as membrane modules or sorbent materials need to be factored in.

Third, serious consideration must be given early in technology development to the scale at which deployment is required. Physical infrastructure such as academic and industrially operated test beds will be needed to take new technologies from the lab to pilot scales so that any perceived risk can be reduced. Managing this will require academia, government agencies and industry partners to collaborate.

Fourth, current training of chemical engineers and chemists in separations often places heavy emphasis on distillation. Exposure to other operations — such as adsorption, crystallization and membranes — is crucial to develop a work force that is able to implement the full spectrum of separations technologies that the future will require.

The original text gave the incorrect units for atmospheric distillation. It should have read 230 GW globally.