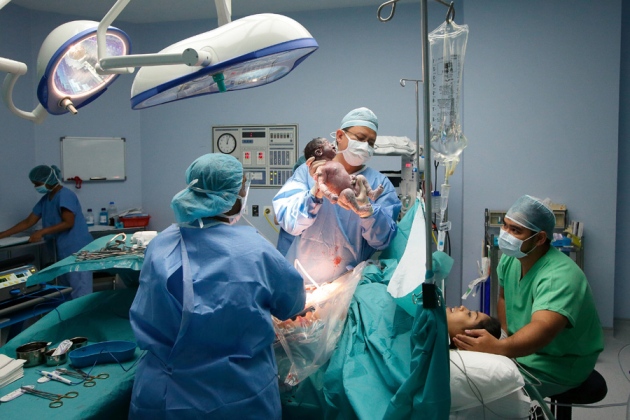 A baby born by caesarean section lacks the microbes it would be covered in if born vaginally.

Researchers have altered the microbiomes of babies born through caesarean section by swabbing them with microbes from their mothers’ vaginas, they report in a first-of-its kind study published on 1 February in Nature Medicine1.

The procedure — tested on just four newborns — is an attempt to simulate the microbial exposures that babies born through caesarean section (C-section) surgeries lack. C-section babies have a slightly higher risk of developing obesity, asthma and other ailments than do children born vaginally. There are also differences between the microbial communities on their skin, in their guts and elsewhere. But no study has established a link between health problems of babies born through C-section and the composition of their microbiomes.

“It’s something that, on first principles, just makes evolutionary sense,” says Rob Knight, a microbiologist at the University of California, San Diego, who was part of the work. “Until very recently, every surviving mammal that was delivered into the world was essentially coated in its mother’s vaginal community.” Knight himself performed the procedure with his wife after their daughter was born via emergency C-section in 2011, although that was not part of any study.

In some countries, especially those in Latin America, C-sections account for more than half of all births. “You wonder, 'What are we doing with all these babies born without the natural primordial bacteria?’,” says Maria Dominguez-Bello, a microbial ecologist at New York University who led the study.

In 2012, Dominguez-Bello began to recruit expectant mothers for the study. The team enrolled 7 women who delivered vaginally and 11 who had a C-section — 4 of whom underwent the microbial transfer. Just before surgery, the researchers sampled the mother’s vaginal microbes with sterile gauze. Within 2 minutes of birth, this gauze was swabbed all over the newborns’ bodies.

The paper reports on microbial differences seen only in the first month of life, but Dominguez-Bello says that they are long-lasting. Her team is working on a follow-up study that looks at the effects of the procedure in about 75 children after a year. “After one year, I can tell you how the baby was born with pretty high precision,” she says.

It will be much more difficult to determine whether the transfers have any consequences on health. Dominguez-Bello estimates that her team will need to enrol around 1200 children and follow them for at least 3–5 years to explore whether the procedure leads to any differences in body composition or rates of asthma or allergies.

Alexander Khoruts, a gastroenterologist at the University of Minnesota in Minneapolis, says that it will be difficult to work out whether the restorations have any effect on health later in life. Systematic differences between mothers who deliver naturally and those who get C-sections could complicate any interpretation, Khoruts notes.

“What I fear is that some patients might come to the clinic and start demanding this sort of protocol, which I don’t think is ready for primetime,” Khoruts adds. Mothers who attempt this themselves could unwittingly transfer infections to their children, notes Josef Neu, a neonatologist at the University of Florida College of Medicine in Gainesville.

Dominguez-Bello receives regular enquiries about the procedure from mothers, and she shares her team’s protocol, which includes testing for some infections, such as group B Streptococcus. But “I tell them that I’m not an MD, and this is not a standard procedure, so I’m not in any possession to recommend this,” she says.

Some families are not waiting for conclusive research to try the procedure for themselves. “In one sense, the science isn’t settled yet," says Knight. "In another sense, compared to other choices you might be making this is a very natural choice. Had you not delivered your baby by C-section there’s no way you could escape coating your baby in these bacteria.”