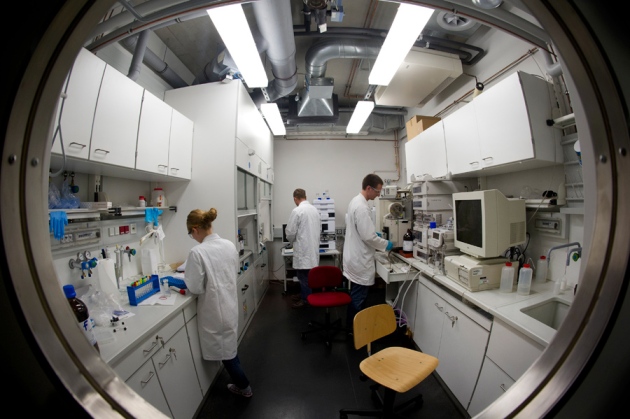 An international poll provides a lens into lab workers’ attitudes to workplace welfare.

Scientists may have a false sense of security about the safety of their laboratories, according to early results from the first international survey of researchers’ workplace attitudes and practices.

Some 86% of the roughly 2,400 scientists who responded said that they believe their labs are safe places to work. Yet just under half had experienced injuries ranging from animal bites to chemical inhalation, and large fractions noted frequent lone working, unreported injuries and insufficient safety training on specific hazards (see ‘A question of safety’).

“Understanding this disparity will be key to positively changing safety culture,” says James Gibson, head of environmental health and safety at the University of California, Los Angeles (UCLA). The university’s Center for Laboratory Safety, a research initiative set up in March 2011, commissioned the study as part of a wave of US-led efforts to examine safety culture following the shocking death of a 23-year-old research assistant, Sheharbano Sangji. She received horrific burns in a UCLA lab fire four years ago (see Nature http://doi.org/dnws3n; 2009), and her supervisor, organic chemist Patrick Harran, may face a criminal trial over her death. Other incidents, including a second lab death, at Yale University in New Haven, Connecticut, in 2011 (see Nature 472, 270–271; 2011), have added to the concerns. 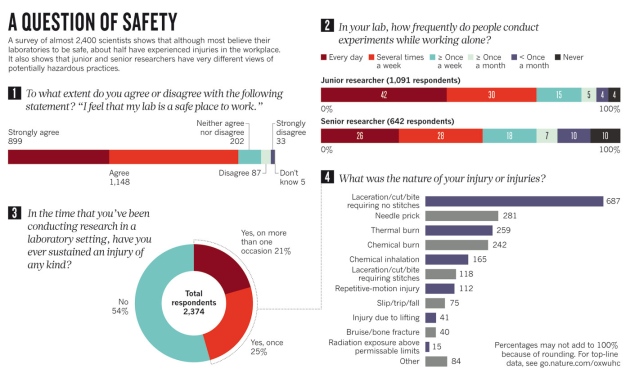 Top-line data are available at go.nature.com/l7wdrq

The study “is the most comprehensive attempt at gathering data on attitudes to safety that I’ve seen — and one more piece of information in a growing body of reports that point to the need to improve the culture around safety in our academic laboratories,” says Dorothy Zolandz, director of the US National Academies Board on Chemical Sciences and Technology. Nature Publishing Group,the publisher of Nature, helped to launch the survey, as did the firm BioRAFT, which provides software for safety compliance and receives investment from Digital Science, a sister company to Nature Publishing Group. UCLA’s Center for Laboratory Safety plans to analyse the data more closely later this year, but shared early results with Nature.

Some of the anonymized survey participants — who were mostly from the United States and United Kingdom, but also hailed from Europe, China and Japan — felt that any injuries they sustained were just part of the job. “Was scratched by a monkey,” one scientist wrote. “It’s bound to happen in that line of work, no matter how careful you are.” Another was bitten while extracting venom from rattlesnakes; a third reported being sprayed on the face and hands with sulphuric acid, leading to US$3,000 of dermatology treatments. The most common injuries were minor — cuts, lacerations and needle pricks — but 30% of respondents said they had witnessed at least one ‘major’ lab injury, something that required attention from a medical professional. More than one-quarter of junior researchers said that they had experienced an injury that they hadn’t reported to their supervisor.

Yet the overwhelming majority of respondents asserted that their labs were safe places to work, that they had received sufficient safety training to minimize injury and that appropriate safety measures had been taken to protect employees. This level of comfort is similar to that found in other, smaller surveys, says Ralph Stuart, secretary of the American Chemical Society’s health and safety division (which has conducted its own surveys on the matter).

But more specific questions in the survey reveal that safety standards are often not adhered to. Only 60% said they had received safety training on specific hazards or agents they worked with, and around half agreed that lab safety could be improved, with chemists (60%) most likely to feel this, and neuroscientists (30%) significantly less so.

One of the biggest gulfs picked up by the survey was differences in attitudes to safety between those in junior roles (such as postdocs and PhD students) and those in more senior positions (such as professors, heads of department and principal investigators). Around 40% of junior scientists said that people worked alone in their lab every day — compounding the risk to health should an accident occur — compared with just 26% of senior respondents (see graph 2), raising the possibility that supervisors are not always aware of the safety culture in their own group.

Overall, about two-thirds of researchers said that people worked alone in their lab at least several times a week. And only 12% of younger scientists said that safety was “paramount, and takes precedence over all other lab priorities”, compared with 36% of senior scientists.

Younger researchers may have a clearer view of safety practices: controlling for other factors, junior researchers worked longer hours at the bench than their bosses. More than half of juniors worked over 40 hours per week, compared with just one-fifth of seniors, with almost 150 people overall reporting more than 60 hours per week.

Another finding — which comes as no surprise to health and safety experts — was the difference in how US and UK scientists assess risks before they start an experiment, which is, in part, a consequence of differences in legal requirements. Almost two-thirds of British scientists said that they used their organization’s approved form for risk assessments — which is mandated by the nation’s Health and Safety Executive — compared with only one-quarter of Americans. More than half of US scientists instead said they assessed risk “informally”.

The biggest barriers to improving safety in the lab were “time and hassle” and “apathy”, scientists said. “If I could have selected apathy three times over, I would have,” one scientist wrote. These factors were closely followed by lack of understanding of safety requirements, lack of leadership and a focus on compliance requirements over safety. “Compliance does not equal to (sic) safety. More paperwork does not equal a safer lab; if anything, it makes it less safe,” wrote one researcher. Another complained: “Safety training is very obviously aimed at instituting blind compliance to avoid liability. It is not aimed at teaching lab workers about why each safety measure is put in place.”

Those feelings might explain researchers’ mixed attitudes to the value of safety training, inspections and safety rules. Two-thirds of those surveyed thought that lab inspections improved safety, with senior scientists significantly more likely to agree than juniors. Yet two-fifths felt that safety training “focused on training compliance regulations rather than on improving laboratory safety”, although 32% disagreed. And close to one-fifth of researchers said that lab safety rules had negatively impacted their lab productivity.

“These respondents are wrong, and this is a reflection of an urban myth [about the value of safety procedures] — it is highly frustrating,” comments Neal Langerman, who runs the consulting company Advanced Chemical Safety, based in San Diego, California.

Some health and safety experts think that the survey — which involved almost 100 questions — was too broad and unfocused to draw definite conclusions. They also criticized its non-randomized sampling technique: the survey was sent out by e-mail to scientists who had registered on nature.com, and to research leaders, who were encouraged to pass it on to their lab scientists. But the experts acknowledged that it was a necessary and useful starting point for further investigation.

“This survey is a baseline study that leaves more questions than answers, but a perception survey is supposed to raise questions that need to be looked at,” said Lou DiBerardinis, head of health and safety at the Massachusetts Institute of Technology (MIT) in Cambridge. DiBerardinis is on one of four teams to receive seed funding in 2012 from the Center for Laboratory Safety to study safety. He is working on a project led by MIT anthropologist Susan Silbey to track changing safety cultures by monitoring inspection records over seven years.

Zolandz says that this year, the National Academies Board on Chemical Sciences and Technology will team up with behavioural scientists to develop practical guidance for researchers on how to establish a better safety culture. In the various efforts that have followed Sangji’s death, “that’s one piece of the puzzle that’s been missing”, she says. “How do you get people to buy into safety?”