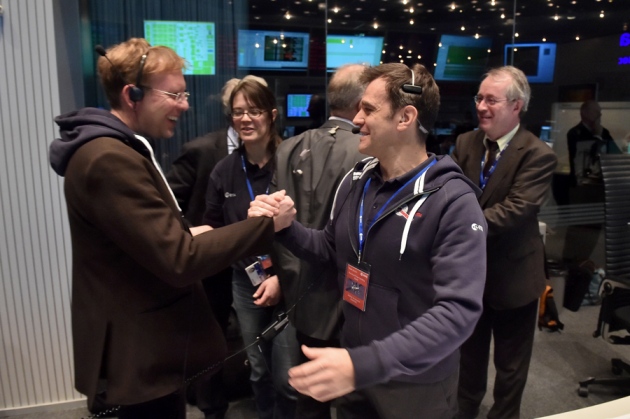 Scientists at the European Space Operations Centre cheered the progress of the Philae spacecraft as it moved closer to its target.

The European Space Agency's (ESA) Philae spacecraft landed on the surface of a comet on 12 November, in a first for space exploration. Scientists erupted in joy when the first signals from the craft reached the European Space Operations Centre in Darmstadt, Germany, confirming that ESA's Rosetta mission had reached its destination.

“We couldn’t be happier than we are now,” said Andrea Accomazzo, Rosetta’s spacecraft-operations manager. ESA scientists confirmed that Philae had not only touched down safely, but was also in radio contact with its parent craft, had power and was sending data. “We are sitting on the surface. Philae is talking to us,” said Philae lander manager Stephan Ulamec.

But despite the jubilation and relief, the landing did not go off without a hitch. Early data suggest that Philae’s harpoons failed to fire or at least to secure the lander, and it seems that the craft bounced before settling on the surface of the comet, called Churyumov-Gerasimenko, or 67P. “Maybe today we didn’t land once, but twice,” Ulamec told a packed auditorium.

The troubles came after a series of small glitches, including a failure in the craft's on-board computer the night before the event. That was fixed with a reboot, but Philae scientists have also confirmed that the lander's thrusters, intended to pin Philae to the comet's surface while the harpoons fired, did not work as planned.

Details about Philae's current status are still hazy. But the uncertainty has done little to dampen the spirit of scientists for whom the landing is the pinnacle of a decade-long mission.

That Philae made it to the surface at all was a momentous achievement for the Rosetta team. Its namesake spacecraft has been travelling to 67P for 10 years. After it arrived in August, ESA scientists had just weeks to choose a landing site for Philae on the irregular and difficult-to-navigate comet, which is shaped like a rubber duck.

Scientists eventually picked an elliptical target with an area of just 1 square kilometre. Hitting it required the Rosetta craft to navigate with extreme accuracy around the 4-kilometre-long 67P — all while being buffeted by gases streaming off the comet.

Even before the event, Accomazzo, an experienced ESA flight manager, had called Rosetta the most complex and ambitious mission he had ever undertaken. Officials from NASA, which contributed three instruments to Rosetta, praised the effort. “How audacious, how exciting, how unbelievable, to dare to take that step to land on a comet,” said Jim Green, the agency's director of planetary science.

Now scientists will attempt to determine how the landing problems have affected Philae. Fluctuations in the radio link between Philae and Rosetta, along with a rotation in Philae's solar-power generator, hint that the landing craft may have lifted off the surface at a very slow speed. But after two hours, this motion seemed to have stopped, leading Ulamec to conclude that it had landed again.

Mark McCaughrean, senior science adviser at ESA, says the theory is "cute if true". "We won't know until we have all the data,” he says.

This was not the only surprise awaiting researchers. As the first pictures rolled in showing aerial views of the landing site, Ulamec confirmed that Philae ended up on a surface that was much softer than the Rosetta team had been expecting. Ulamec says that Philae has now sent back not just “housekeeping” data, but also scientific observations, including images and information on surface properties. Instruments designed to test the composition of the comet are also working well, he adds.

Plans for Philae's first science mission — which will run until the craft's main batteries run out of juice sometime in the next 2.5 days — include taking more photos and drilling 23 centimetres into the comet’s surface to retrieve a sample for analysis on the lander's on-board laboratory. In collaboration with Rosetta, Philae will also use radar to probe the interior of 67P.

Rosetta dipped below the horizon of the comet overnight, severing Philae’s contact with Earth for several hours.

The first panoramic pictures from Philae’s Comet nucleus Infrared and Visible Analyzer (CIVA) camera were due to be published in the hours after landing. But an early end to the lander's data link — which could have been caused by a hill on the horizon or something more ominous — delayed the release until the next morning. 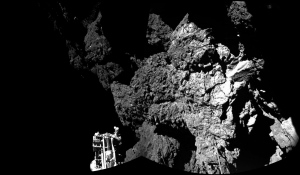 The first images from CIVA show Philae safely on the surface of the comet.

Nonetheless, the lander made it to 67P in one piece, and remains on the comet. "It's just an astonishing day. It's a privilege to be part of it," said McCaughrean.

Philae will need to keep riding its luck if it is to extend its mission beyond the initial phase. Carrying on beyond the next few days will mean using solar panels to charge a second set of batteries, which can happen only if the panels remain clear of dust.

If the solar panels charge the batteries successfully, Philae could continue taking data until as late as March next year, when conditions on the comet surface are expected to become too hot for the lander to operate.

Live from mission control in Darmstadt, Germany — the moment that ESA received word that Philae was safely on the surface of the comet.

Relive the whole experience by reading our live blog, and playing videos covering the build-up and descent of the Philae lander to the comet's surface.