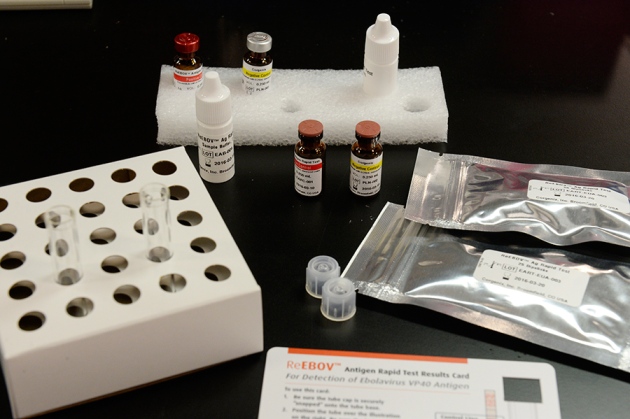 An inexpensive, rapid test kit for Ebola was approved in February, but has not yet been deployed in the field.

A test kit that diagnoses Ebola rapidly using just a finger prick of blood could save lives in the ongoing epidemic in West Africa. But researchers are perplexed as to why the diagnostic kit has not been deployed in the field, despite both the World Health Organization (WHO) and the US Food and Drug Administration approving it four months ago for emergency use.

“A lot of people are frustrated,” says Nira Pollock, an infectious-diseases researcher at the Boston Children’s Hospital in Massachusetts, and the senior author of an independent field-validation study of the test kit, published on 26 June1 in The Lancet. The results were presented to the WHO and health ministries in affected countries in March. “Many groups on the ground would like to deploy the test, but can’t, because national regulators haven’t approved it.”

The test, developed by the medical-diagnostics company Corgenix, of Broomfield, Colorado, detects Ebola specific proteins that are in the blood. Like a pregnancy test kit, it shows a positive result by coloured bands; it is simple enough to use that healthcare workers with minimal training could deploy it in remote villages and get a fast result. Existing ‘gold-standard’ methods of diagnosis require blood samples to be drawn and transported to sophisticated central laboratories for processing — which can result in long delays. The Corgenix test could not replace lab confirmation, but it would allow workers to identify infected people and isolate them faster, greatly reducing the spread of disease, says Nahid Bhadelia, an infectious-diseases physician at the Boston University School of Medicine and the Boston Medical Center in Massachusetts.

At the peak of the epidemic, delays and bottlenecks in testing at centralized labs meant that people who were infectious were going undetected for around 5–6 days before being diagnosed, which had devastating effects, says Bhadelia, who is about to return to Sierra Leone for her fourth stint working in an Ebola treatment centre.

One concern was that the test might fail to detect the virus in some cases of Ebola. But the independent field-validation1 (in Sierra Leone) shows that the kit was as sensitive at catching cases as the gold-standard comparison — a real-time polymerase chain reaction (RT-PCR) test that amplifies and detects genetic sequences that are specific to Ebola in blood and other bodily fluids.

Robert Garry, a virologist at Tulane University in New Orleans, Louisiana, who helped to develop the Corgenix test, blames the delays on what he says are overly restrictive and ambiguous sets of guidelines released by WHO in March and June. They state, for example, that the rapid “antigen-detection” tests “have no role in the routine management of Ebola in settings where PCR (molecular) testing is available; however, they may have utility in settings without laboratory infrastructure if their benefits and limitations are understood”.

Many people have misunderstood that to mean “if you have PCR, you don’t need the test”, Garry says. But the Ebola epidemic has shown that use of a centralized testing model alone is badly flawed, he says, and that additional decentralized testing is needed in the places where outbreaks occur to slash delays in identifying those infected. “We need to rethink the conventional wisdom about PCR being the only answer,” he adds.

But Mark Perkins, chief scientific officer of the non-profit organization Foundation for Innovative New Diagnostics (FIND) in Geneva, Switzerland, defends the thrust of the WHO's guidelines, which FIND contributed to developing. The concern with the rapid-antigen tests, he says, is that they report too many false positives. In the independent validation, 6 of 77 people who tested negative for Ebola using PCR were declared positive by the Corgenix kit. “To roll out an assay with so many false positives is unthinkable,” Perkins says.

That is less of a problem in this instance, argues Bhadelia, as researchers are proposing to use the test only to speed up the identification of those who are positive for Ebola, before confirming the results in the lab a few days later.

Moreover, the independent validation has raised questions over the quality of some of the PCR testing that was done during the epidemic. In the study, researchers used a routinely employed, partly-automated PCR kit made by altona Diagnostics, of Hamburg, Germany. But some of the samples that the altona test scored as negative — and which the Corgenix kit scored as positive — were later confirmed to be positive using a reference-standard test kit. That is a concern, says Bhadelia, as false negatives by the altona test might have allowed people with Ebola to return to the community while they were still infectious. It also suggests the possibility that the Corgenix kit might not be as prone to false positives as Perkins suggests — though further research would be needed to clarify the kit's performance.

Perkins says that although a rapid test would have helped to triage people at the peak of the Ebola epidemic last year, when PCR labs were overwhelmed, the drastic fall in the number of cases since then has meant that labs can now easily handle the load. Rapid tests are now of “reduced relevance”, he says.

But researchers say that this misses the point. Although most Ebola cases are currently close to urban PCR labs, sporadic outbreaks still occur in rural areas. Should Ebola flare up again, it would be beneficial to have gained experience using the kits in the field, says Pollock. Deploying the kits would also provide much more data about their real-world performance, useful both for this and further outbreaks, says Mara Jana Broadhurst, a co-author of The Lancet study. who works on Ebola diagnostics for Partners in Health, a global-health organization in Boston, Massachusetts.

Ebola in West Africa clearly exposed the "logistical constraints" of using PCR alone and its weaknesses as a frontline tool in a serious epidemic, says Broadhurst. "We need to consider all options.”