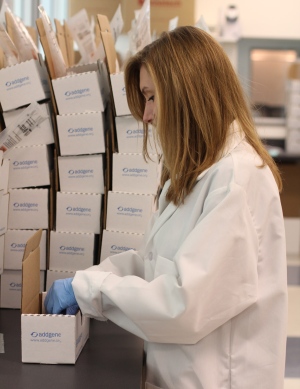 Addgene, based in Cambridge, Massachusetts, distributes 30,000 types of plasmids deposited by 1,700 labs.

It was born out of the frustration of a graduate student trying to finish her thesis. In 2002, Melina Fan, then at Harvard Medical School in Boston, Massachusetts, found that the genes she needed for her experiments on metabolism were in other scientists’ freezers. She wrote to more than a dozen labs to request certain plasmids — circular packets of DNA that scientists use to shuttle genes into cells. Only about half responded, and some plasmids took months to arrive. When they did, some contained the wrong genes.

“It wasn’t that the scientists didn’t want to share,” says Fan. “It was just that the logistics were difficult.”

So in January 2004, along with her husband and her brother, Fan founded Addgene, a repository in Cambridge, Massachusetts, in which scientists can deposit plasmids for free and order them for US$65 apiece. In its first year, Addgene shipped only one plasmid, containing a gene that Fan had worked on as a graduate student. Last year, the non-profit organization sent out more than 90,000 plasmids, ranging from specialized protein-tagging tools to empty DNA rings that can be filled with select genes.

Addgene’s growth over its ten years demonstrates the extent to which biological resource centres (BRCs) have become crucial middlemen, enabling the sharing of tools that scientists say they are willing to distribute but often fail to. Where cell lines or genetic strains of model animals were once shared through unreliable, ad hoc networks, BRCs have allowed biological tools to be procured easily online.

“BRCs are suppliers of public goods that are essential to supporting the rate of scientific progress,” says Jeffrey Furman, an economist at Boston University in Massachusetts, who reported in 2011 that depositing cell lines, microbe strains and other items in BRCs could boost the citation rates of articles associated with the materials by 57–135%. And yet some are struggling to obtain the funding they need to survive. 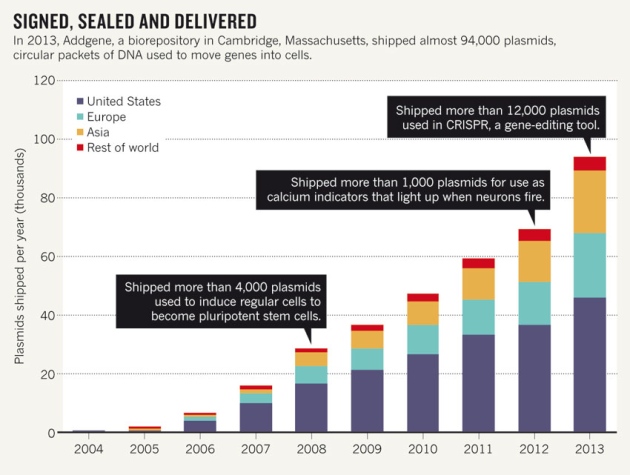 The earliest BRCs have long, venerable histories. The American Type Culture Collection (ATCC) in Manassas, Virginia, established in 1925, holds more than 1 million genetic constructs, microbes and cell lines. And the Jackson Laboratory in Bar Harbor, Maine, established in 1929, maintains a collection of 7,000 strains of inbred and genetically modified mice.

But although the repositories are valued, maintaining them can be challenging, especially if they hold expensive materials that are studied by few researchers, says Kevin McCluskey, curator of the Fungal Genetics Stock Center at the University of Missouri–Kansas City. The collection of more than 25,000 fungal strains is supported by a US National Science Foundation grant that has not been renewed.

“We are preserving the samples so they will be available to scientists in the future.”

“They want us to become self-sustainable, but then you have to raise your fees so much that you impact the ability of people to use your resources,” McCluskey says. He notes that his collection charges a mere $30 per strain to academic labs, whereas those distributed by the ATCC can cost ten times as much. (A spokesperson for the ATCC says that the cost difference is justified by the breadth and quality of its collection.)

Changes in technology can upset the apple cart, too. Pieter de Jong, director of the BACPAC Resources Center at the Children’s Hospital Oakland Research Institute in California, built up a diverse collection of artificial chromosomes to store and copy large chunks of high-quality DNA for sequencing projects elsewhere. At one point, the collection was used in the Human Genome Project.

But the rise of faster, cheaper sequencing has decreased demand for artificial chromosomes, and user fees no longer cover maintenance, says de Jong. Last year, he discarded backup materials and halved the number of storage freezers he keeps to cut costs. Next, he may need to prune unique material that is seldom requested, such as his platypus DNA collection.

But what is seldom requested today can be invaluable tomorrow. A heat-stable enzyme used in the 1980s to develop the polymerase chain reaction, an essential DNA-copying technique, came from bacteria deposited in the ATCC in the 1960s, with no consideration of its practical relevance.

At Addgene, about one-third of the plasmids are never requested, but the fees from the others cover the cost of maintaining them, says Fan. “We are preserving the samples so they will be available to scientists in the future.”