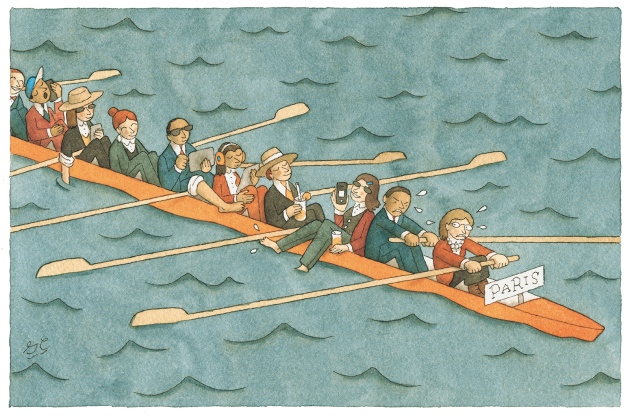 Negotiations at the United Nations climate summit in Paris this December will adopt a 'pledge and review' approach to cutting global carbon emissions. Countries will promise to reduce their emissions by amounts that will be revised later. The narrative is that this will “enable an upward spiral of ambition over time”1. History and the science of cooperation predict that quite the opposite will happen.

Climate change is a serious challenge because the atmosphere gives a free ride to countries that emit. If some nations sit back and rely on others' efforts, the incentives for anyone to act are weakened. Review of the first phase of the Kyoto Protocol at the 2012 UN climate meeting in Doha, for instance, resulted in Japan, Russia, Canada and New Zealand leaving the agreement, frustrating those who kept their promises.

Success requires a common commitment, not a patchwork of individual ones. Negotiations need to be designed to realign self-interests and promote cooperation. A common commitment can assure participants that others will match their efforts and not free-ride. A strategy of “I will if you will” stabilizes higher levels of cooperation. It is the most robust pattern of cooperation seen in laboratory and field studies of situations open to free-riding2.

A global carbon price — so far excluded from consideration in international negotiations — would be the ideal basis for a common commitment in our view. A price is easy to agree and handle, relatively fair, less vulnerable to gaming than global cap-and-trade systems, and consistent with climate policies already in place, such as fossil-fuel taxes and emissions cap-and-trade.

David MacKay explains what climate negotiations should learn from the science of cooperation.

Only a common commitment can lead to a strong treaty. Forty years of empirical and theoretical literature on cooperation confirms that individual commitments do not deliver strong collective action. Cooperators find that defectors take advantage of them. Ambition declines when others are revealed to be free-riding3. Dishes often stack up in the sinks of shared apartments. But in the Alps, villagers have successfully managed shared land for hundreds of years, with a common commitment governing grasslands4.

Imagine that you and nine other self-interested players (representing countries) take part in a game. Each player has $10, some or all of which they may simultaneously pledge to a common pot. A referee makes sure that they honour their pledges. Every dollar (for carbon dioxide abatement) placed in the pot will be doubled (by climate benefits) and distributed evenly to all players. So putting a dollar in the pot will return 20 cents to each player.

Consider two variants of the game. First, in the 'individual commitment' version, pledges are made independently. This is the classic public-goods game, in which the rational selfish strategy is to contribute nothing, because this makes a player better off no matter what the others do. The result is the famous tragedy of the commons. Cooperation does not occur, even though everyone would gain from it.

Second, in the 'common commitment' version, players condition their contributions on others' pledges: a referee ensures that all contribute the amount of the lowest pledge. After enforcing this common commitment, the money is doubled and distributed evenly, exactly as before.

“Harness self-interest by aligning it with the common good.”

This changes everything. Pledging $0 will mean simply keeping your $10, whereas pledging $10 could result in ending up with anything between $10 and $20, depending on what others pledge. So, because you cannot lose and could gain by pledging $10, that is what you would do, even if you are completely selfish. Since all parties would pledge $10, the group's $100 is doubled and all end up with the maximum amount of $20.

Selfish behaviour has been changed from 'contribute nothing' to 'contribute everything', because the common commitment protects against free-riding.

In 1997, the Kyoto negotiators initially did try to agree a common commitment, expressed as a formula for national emissions caps, but failed. In the end, each nation was simply asked to submit their final numbers for insertion into the draft annex5. The result was a patchwork of weak and unstable commitments. Similarly, in response to the 2009 Copenhagen Accord, China pledged emissions equal to those considered 'business as usual' before the accord; and India pledged even less.

Enforcement is widely thought to be the missing ingredient in the Kyoto Protocol and crucial for the success of a Paris agreement. This is only half right — both enforcement and a common commitment are required. For example, if drivers chose their own speed limits, there would be no use enforcing them, because everyone would drive at their desired speed. Instead, because it limits others as well, people agree to a common speed limit that is lower than almost everyone's individual limit. In other words, with individual commitments, there is nothing meaningful to enforce, whereas enforcement strengthens a common commitment.

What could all countries commit to? National limits on the quantity of emissions will not work. Kyoto negotiators suggested at least ten formulae to determine the reductions that each nation should make, but could not agree. When attention turned to reducing emissions by some percentage relative to 1990 levels, individual commitments ranged from an 8% decrease to a 10% increase. The United States and developing countries made no commitments at all.

Percentage pledges failed because countries differ; for instance, some economies declined after 1990 and some grew. Developing countries fear caps that curb their growth. Instead they see it as fair to allocate emission permits on an equal per capita basis. Because permit sales would result in huge wealth transfers to poor countries, rich countries find such proposals unacceptable6.

There is no longer any serious discussion of a common commitment to reduce the quantity of carbon emissions. 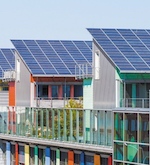 We, and others, propose an alternative: a global carbon-price commitment7. Each country would commit to place charges on carbon emissions from fossil-fuel use (by taxes or cap-and-trade schemes, for example) sufficient to match an agreed global price, which could be set by voting — by a super-majority rule that would produce a coalition of the willing.

A uniform carbon price is widely accepted as the most cost-effective way to curb emissions. Carbon pricing is flexible, allowing fossil taxes, cap-and-trade, hybrid schemes and other national policies to be used (unlike a global carbon tax). All that is required of a country is that its average carbon price — cost per unit of greenhouse gas emitted — be at least as high as the agreed global carbon price.

Unlike global cap-and-trade, carbon pricing allows countries to keep all carbon revenues, eliminating the risk of needing to buy expensive credits from a rival country. Taxes need not rise if a nation performs a green tax shift — reducing taxes on good things such as employment by charging for pollution. Shifting taxes from good things to bad things could mean there is no net social cost to pricing carbon, even before counting climate benefits8. 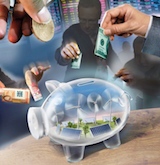 A global price does not automatically result in acceptable burden sharing. A 'Green Climate Fund' will be needed to transfer funds from rich to poor countries. To minimize disputes, the objective of climate-fund transfers should be to maximize the global price of carbon. This can be implemented in a way that encourages rich countries to be generous and poor countries to vote for a higher global carbon price9, for example, by making all climate-fund payments proportional to the agreed carbon price.

After decades of failure, a fresh approach is needed — one that is guided by the science of cooperation. A common price commitment would harness self-interest by aligning it with the common good. Nothing could be more fundamental.